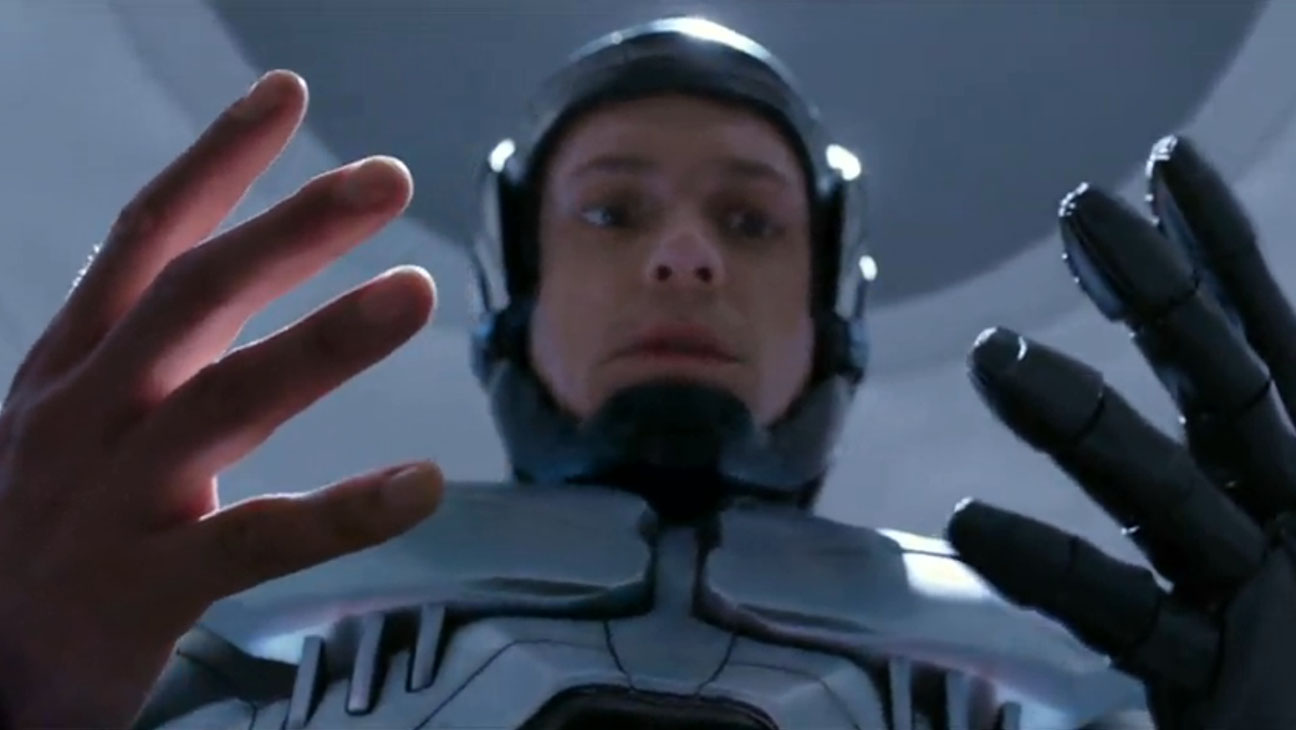 The Accidental Dystopia in the RoboCop Remake

So there’s a “RoboCop” remake. That’s something I have to tell my unborn children as well as my unknown bastards. It’s also about to clear 150 million on a 100 million dollar budget. Though only 50 of them bones is domestic it’s still not out of the realm of possibility I’ll have to tell those tiny bearded boys and girls there’s a “Robocop 2” too. (As in ‘also’, not 2x2 which would be weird but not impossible. I don’t know how they’re going to number movie sequels in the future!) But whether or not the film can be considered a success, both in financial terms and in respect to its ancestry, is something I’m less concerned with than addressing some particularly egregious assumptions the film has regarding the place of technology in international and domestic security.

“Robocop” 2014 (aka “Robot-Cop” 2014) is set in the B-Unit stages of Stephen Spielberg’s “Minority Report” except without all those confusing glares and self-driving cars. Following an assassination attempt on undercover cop Alex Murphy, his wife decides to sign off on an experimental procedure that will put Murphy into a robotic suit from Omnicorp. (We don’t even get to see her with her bra off and she’s making decisions!? What kind of future is this?!) See, Batman wants his heavy robotic security forces on the streets so he can get paid and the only way to do that is to “put a man into a machine.” I’ve seen machines inside men but this is one step closer to crazy-town!

Commissioner Gordon’s tapped in for Lucius Fox and when he’s not designing some tactical military gear and robots he's passing the time turning people into human-lollipops. Omar from “The Wire” gets the one solid laugh in the movie as Robo’s partner. Lady-Robocop looks worried and grabs their son a lot. Son-Cop is scared. We know this because Robo’s HUD flashes emotional key phrases such as “anxious” and “nervous”. Eventually Robocop is pissed at Batman for almost killing him. This is weird since they both have a penchant for gadgets, vengeance, and pronounced codpieces. Meanwhile that guy from “Snakes on a Plane” plays Glen Beck and Sean Hannity’s love child.

Aside from the constant cameos (seriously worse than a Judd Apatow, Adam McKay, Wes Anderson super-cut, geez!) the problem with this “Robocop” is that its eponymous hero is nothing but a vehicle through which total surveillance technology is realized and unquestioned. A constant stream of information is flooded into RoboCop not only from recorded case files held by the police department but also closed circuit television streams from across the city. RoboCop is, in this instance, completely capable of watching any corner of the city he chooses at any time. What’s more, can also tap into any phone conversation as long as he has the number. Through this vast complex of surveillance technology RoboCop is able to locate anyone in the city while hearing and/or seeing exactly what the person is doing.

And this is completely unquestioned in the film. RoboCop’s acquisition of this information is depicted in such a nonchalant manner from his perspective that the film gives us no leeway to be critical of these methods. This is made especially problematic when Murphy begins investigating his own murder. By accessing city surveillance equipment (approximately 3-4 cameras and some sound recording equipment) he constructs a complete three dimensional digital replica of his murder. RoboCop continues to access this information as a means for executing personal as well as civic justice. The film gives us the audience such little space to consider these motives that we are left to assume, yes, of course RoboCop needs access to this information, to these devices, in order to avenge his death and by extension satisfy our presumed cathartic response. The film is tethering our experience to RoboCop in such a way as to convince us to root for and find necessary invasive technology.

There does exist a potential counterpoint to this in the film’s prologue. During a promo spot for the “Novak Element” we watch a swarm of military androids escorting a TV crew through the streets of Tehran while also performing a security sweep of a neighborhood’s residents. Referred to as “drones” the comparison between these and those in contemporary political discourse ends in name alone. Suddenly they are attacked by a small group of suicide bombers with the only stated goal of “dying on television.” The subsequent attack results in the death of an adolescent boy whose father was amongst the bombers. It is inferred that the goal of the bombers is to make apparent the coercive forces that are holding the community prisoner. And while the sequence hints at some ambivalence toward American military imperialism through technology it’s quickly swept under the rug in favor of some dubious and bland “man vs. machine” moral rhetoric. The sequence is not only swallowed up in the film’s fictitious news-entertainment sequences but by the film itself as we endure repetitive ponderings of moral ambiguity. Indeed, the surveillance and security question is eclipsed by RoboCop’s quest for vengeance through the very means the bombers are attempting to expose.

The dystopia in Detroit may not be as visually grim and total as that of Verhoven’s original film. Rather the unintended dystopia posited in this “RoboCop” is one of total and absolute surveillance. There’s a point halfway through the film in which a security advisor for Omnicorp expresses concern that Murphy is bucking the hardware he is riding: “He’s investigating his own murder!” To which the head of marketing states, “Why didn’t I think of that?” The idea is a perfect reflection of the driving principle behind “RoboCop”. By foregrounding Murphy’s murder and subsequent investigation, along with some glib Asimov-like dialogue, we are presumed to accept the fact every image, every sound we make is being recorded. “RoboCop” is set in a dystopia alright, just one that might be more familiar than we care to admit.