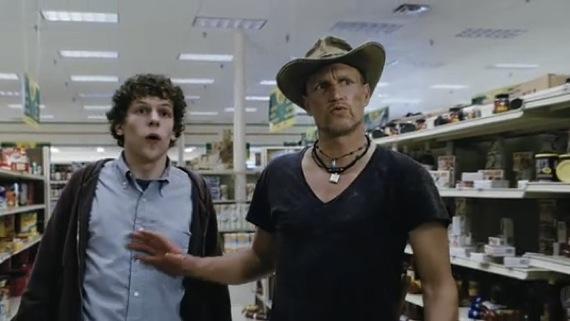 If you haven't heard of "Zombieland" by now, you probably haven't been anywhere near a theater, television, or computer for the past 6 months. The name has been on everyone's tongues, and I've been asked about it by nearly everyone that I have regular contact with. Usually when hype reaches this level, I end up being tasked with the job of bursting people's bubbles with a word that I use all too often these days: "meh". Fortunately, the news that I have come to bear is good news. Not only is "Zombieland" an extremely fun experience to sit through, but it also has value beyond the laughs.

The tale of "Zombieland" begins with the introduction of Columbus (named for his city of origin), and his rules for zombie survival. He has many rules, such as always wear your seatbelt, and make sure to "double tap," or shoot a zombie twice to ensure that it's re-dead. These rules literally pop up on screen at various times throughout the film's running time, but never overstay their welcome. Columbus, played by the poor man's Michael Cera, Jesse Eisenberg, is convincing in his role and generally lovable despite the overexposure of his witty nerd shtick.

Soon after the viewer is acquainted with the basics, Columbus meets Tallahassee, a roguish cowboy played by everyone's favorite pothead, Woody Harrelson. If the the cheekiness of the opening sequence is the heart of "Zombieland", than the Tallahassee character is the rubber balls hanging from the trailer hitch. Harrelson's pitch perfect performance accounts for a majority of the laughs in the film, whether he's unscrupulously launching buckshot through the undead or risking life and limb to get his hands on a Twinkie.

Throughout their travels Columbus and Tallahassee are hoodwinked by two young ladies, Witchita, played by Emma Stone, and Little Rock, played by Abigail Breslin. After a few incidents between the ladies and gents that leave Tallahassee and Columbus empty handed and without transport, the four principal characters gang up to head to a theme park that is apparently devoid of zombies. Although there is nary a zombie to be seen through a lot of the middle portion of the film, the interaction between the members of this unique foursome manages to add dimension to the characters, which is generally difficult to do in such a short running time. This middle portion is also aided heavily by one of the funniest extended cameos I've ever seen in a film of any sort, which I won't spoil so that you can feel the same joy that I did when it is all revealed.

I've heard "Zombieland" described as the American "Shaun of the Dead", which isn't entirely inaccurate. Both films are comedies first and horror flicks second, but they both also feature hilarious visceral zombie kills. Unfortunately for "Zombieland", many of these video game style dispatches are spoiled in the trailer, but there are some more gems to be discovered throughout, especially in the finale.

Tallahassee and Columbus make killing zombies look like so much fun, that it almost makes you want to experience the world of "Zombieland" first hand. That feeling personifies what's so great about this film. If you write down the premise of "Zombieland" on paper and read it aloud, it doesn't seem like anything special, but very few genre films I've seen recently have provided such catharsis for me. There is one scene where the gang is doing nothing but smashing the hell out of a gift shop, and I found myself totally transfixed by just how much I was feeling the same satisfaction watching the carnage as the characters were orchestrating it.

The mainstream horror scene in 2009 is pretty bleak, but this film represents the type of experience that can only be delivered by a film that doesn't take itself seriously, and aims solely to please the viewer. "Zombieland" might not be a life changing experience, but it more than does its part to breathe some much needed life back into today's stale landscape. The most disappointing aspect of the "Zombieland" experience was not the film, but the trailers preceding it. For every drop of vomit left in your mouth from watching the trailer for the "Twilight" sequel, "Zombieland" has a satisfying shot of whiskey to wash it down and replace that sour look with a smile. I don't need every horror film to be like "Zombieland", but I do need a film like this once a year to remind me that there is so much fun to be had with the genre that we love.