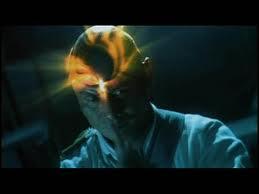 If marketers ever stop focusing on all those desirable demographics and decide to release a movie with a title that I personally would be utterly incapable of resisting, it would be hard to come up with one better than “Shaolin vs. Evil Dead”. I love movies with "Shaolin" in the title. I love movies with "Evil Dead" in the title. I love movies where one thing versus another thing. Throw Gordon Liu in the mix and I’m a helpless deer in the headlights of an oncoming hopping vampire kung fu spectacular. If I just had to review the title I could just slap a ten up there on the right and be done with it. Unfortunately, the evil alien overlords at BGH expect me to actually watch these movies before I write about them and the sad truth is, though it’s not entirely without its merits, the movie “Shaolin vs. Evil Dead” just doesn’t live up to its title. In fact, I’m not even sure if it’s correct to call it a movie at all.

“Shaolin vs. Evil Dead” was made around the same time as another Gordon Liu project, a little film called “Kill Bill”, and the producers decided to borrow a little bit from the movie, a fair enough trade considering how much Tarantino has borrowed from Asian cinema. “Kill Bill” is packed full of ideas that are ripe for reclaiming but, in a classic example of learning entirely the wrong lesson from a successful film, “Shaolin vs. Evil Dead” was split into two parts and the second half of the movie, “Shaolin vs. Evil Dead: Ultimate Power” (again with the irresistible titles), was released separately. This is not the case of a movie and its sequel being filmed simultaneously, this is a movie that dicks around for most of its run time in order to reach feature length and then abruptly ends in the middle of a fight scene.

With that caveat out of the way, we can look at the movie (or movie fragment if you prefer) on its own terms. As a Hong Kong kung fu horror comedy, “Shaolin vs. Evil Dead” isn’t too bad, although my judgment might be impaired because I rarely had any idea what was going on. Basically, the film follows a Taoist priest named White (played by the master of ol' dirty bald headed kung fu, Gordon Liu) who fights the undead with the help of his two bumbling sidekicks. One day after clearing out a haunted café that serves “Lost Boy” noodles, White runs into Black, his old rival from Kung Fu High School. Black is also in the business of keeping the dead dead but he has a fundamental difference from White. When Black busts a ghost he destroys their souls forever, whereas White is more of a catch and release guy, or more accurately, catch, encase their soul in an egg and release it into a hole so that they can be reincarnated. This difference in philosophy causes White and Black to engage in a series of epic battles which inadvertently awakens the King of the Vampires just in time for the credits to roll.

Despite the incomplete nature of the film, there is fun to be had for fans of hopping vampire kung fu movies. The fight scenes are the kind of large-scale wire fu that can be expected of such a production. The fighting is leavened with CG work that isn’t great, but is good enough for a campy kung fu movie. The humor mostly consists of the kind of childish slapstick and pee and poop jokes that are endemic to many Asian comedies. For example, at one point White’s younger assistant, a 10-year-old boy, accidentally eats a soul and ends up giving birth to a boy of about the same age who insists on following him around and calling him “mama”. It’s weird, disturbing, wrong and annoying, all in one.

Not having watched the second film yet, I don’t know if I could give “Shaolin vs. Evil Dead” a bouquet or a brickbat. It was a fun (if somewhat padded) way to pass 90 minutes but the frustration of the non-ending immediately followed by awesome-looking footage from the next movie almost seems purposely engineered to elicit anger rather than excitement. Hopping vampire novices should still start with the older "Mr Vampire" movies but if you’re like me you can never be too mad at any movie that features Gordon Liu killing the undead via Buddhist Post-it notes. If the second film is as fun as it looks, it might just make up for the fact that its predecessor abruptly

The Art of Self-Defense (Fantasia Festival 2019)