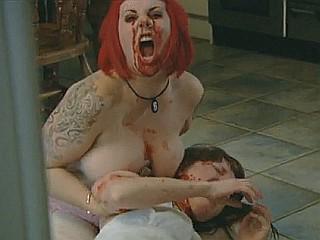 I knowingly broke the string. As a reviewer over the last 4 weeks I had been on a short run of really engaging, artful and challenging films. “Confessions”, “I Saw the Devil”, “Eyes of the Mothman”, even the spotty “The Violent Kind” had its own involving sort of whimsy. Well, last week I checked out Erin’s blog on “Zombie Women of Satan” and decided to exit the world of amply-budgeted, finely-crafted films. Let me start by saying, Erin did a fine job of representing what this film has to offer in her blog. Such a good job in fact that I derailed my own train of well-hewn cinematic offerings in favor of a film featuring nipples dripping blood, close-ups of dwarf shit and two scenes of a clown jerking off in the forest. After bolstering my opinion of modern horror cinema over the last four weeks, I needed a foray into the land of limp plots, stiff members and production values that just make you feel dirty. Somehow I sleep better just knowing that DIY micro-horror still has blood pumping through it’s navicular fossa and that this longstanding film institution remains erect and ready to spew the pearly man-sludge of sleaze movie charm in to the glistening eyes of everyone who beats off the ventured path. And no I don’t mean‘ventures off the beaten path’.

“Zombie Women of Satan” has a plot, but it doesn’t care about it at all and neither will you. That being said, rock star sans band, Skye Brannigan is searching for her sister with a troop of Jim Rose-lite sideshow entertainers. The freak troop is double-dipping on this trip by doing an internet radio show with a sex cult leader named Tycho at his compound in the woods (presumably because Tycho has rejected this whole podcasting thing as passing fad). Anyway, the compound happens to be the very same place where Skye’s missing sister is being kept as a concubine in Tycho’s sex sect. As script would have it, this complex also houses Tycho’s demented father who is conducting experiments on his son’s buxom acolytes. Eventually the guinea pig girls start hemorrhaging from every orifice and voraciously consuming human flesh. As the plot reaches climax some girls pop out of their brassieres, others are humped in the name of science and all of them doggedly pursue Skye and her dwindling group of carnival clowns.

Some of what I have just reported in the synopsis may be slightly factually inaccurate; this is because there are more than a few head-bob moments in “Zombie Women of Satan”. Make no mistake this movie has everything that it advertises (except maybe Satan) and unfortunately a lot more than promises... in the wrong spots. My big problem with the whole kitten-caboodle is that it is simply too long and spends way too much time ramping up to the topless zombie zaniness. The cast does it’s best to fill the empty spaces with banter and hijinx but flat angles and an interminable burlesque/carnival set-piece really kill the momentum early on.

Once the blood starts spouting and titties begin to fly, flap and flop across the screen “Zombie Women of Satan” becomes a gleefully festooned little cod-piece of a movie that probably holds at least one chuckle for everyone. The problem with those chuckles is that the film could have used some polish either in the scripting or editing process so that the actors' riffing could have been heavier on the funny and lighter on the filler and exposition. There are also a few moments here within that make a grab at something approaching drama. This is simply unforgivable in a zombie comedy when there are still cast members who have yet to disrobe or be eaten.

In the end, I pretty much got what I expected from this movie. I wish I could have gotten it in 40 minutes instead of 90 but that may be a reflection of my diminished patience for this style of film after watching so many stellar films in the last month. The best advice I can give on whether or not to watch this film is to watch the trailer that Erin posted first, then decide whether you are willing to sit with your naked-zombie blue-balls for 30 minutes while dick jokes clunk to the ground around you like spent shell casings. Whatever you decide I would not recommend this as a chaser to a really good film, even if you have a hankering for a few stroke jokes and a juggy zombie in a wheelchair. I didn’t like a great deal of this film, having said that I am happy to report that hastily made, horror/sleaze comedies that stand middle finger unfolded as they spray bloody ejaculate on their audience are still being churned out by fearless filmmakers the world over.