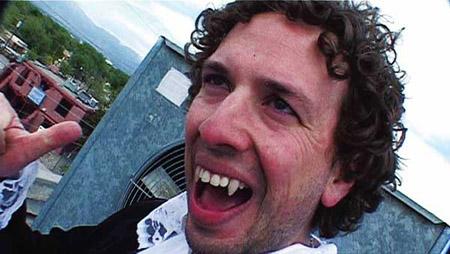 Welcome to Necroville, a city over run by zombies, vampires, werewolves and the like. Jack lives at home with his girlfriend Penny and whiles away his days with his best friend Alex. The problem is, they both lost their jobs, and Penny has needs. She’ll be sure to tell you about her needs at every chance she gets too! While on the job hunt, the two men discover the local office of “Zom-B-Gone”, your local experts at getting rid of your typical monster nuisance. Alex being a gun fanatic and Jack being pretty handy with his fists, the both make a natural fit. Soon they’re off about town cleaning up vampire infestations, all while Jack tries his best to keep Penny happy, and to keep her from the clutches of her Master Vampire ex-boyfriend.

In the liner notes included in the DVD release from Shock-O-Rama, it’s mentioned that “Necroville” is sort of like “Clerks” for the monster set. (Not an exact quote mind you.) Normally when I see a movie compare itself to something like “Clerks” it tends to make me roll my eyes. Generally it’s nothing but marketing speak and wishful thinking from the directors. So as I settled in for the first thirty minutes or so, you can imagine my surprise to find out; “Hey, this really is a bit like Clerks!”

Written by Garberina and Adam Jarmon Brown, “Necroville” is a $10k feature flick. It’s cheap in parts and even somewhat hokey, much like you’d expect from a ten thousand dollar movie. Compared against the big leagues, it will pale; when you throw it in the ring with other independent horror flicks of it’s ilk however, it’s going to clean house.

In "Necroville, the script and the action combine together to make for a fun little flick that’s based on just about any horror aficionado’s wet dreams. Inside you’ll find zombies who shamble about mostly unnoticed, vampires that lounge about in small bedrooms, werewolves that stalk… parking lots. Never taking itself too seriously, all are used in ways to illicit laughs. Even our plot here is decent as it manages to stay cohesive despite it’s zaniness, while allowing you to feel a bit sorry for the character of Jack and his needy girlfriend. At times the jokes start to feel forced or too over the top but still fails to detract from the overall package. In fact, some would say it adds to the charm.

The makeup effects are all top notch for a $10k budget. Managing to go above and beyond the basic face-paint and Karo syrup, they don’t always look realistic, but they look like a labor of love from the filmmakers and fit well with the overall package.

If you’re looking for a movie of blockbuster proportions, you won’t find it in “Necroville”. That’s not a slight against the filmmakers however; as that’s not really what they were aiming for. What you will find is a fun little off the wall horror flick that will give you some good laughs. You won’t be scared, but you’ll cringe at the gooey parts like you were supposed to. In the world of low budget independent horror, these guys are going to get nothing but better, and that’s a good thing.