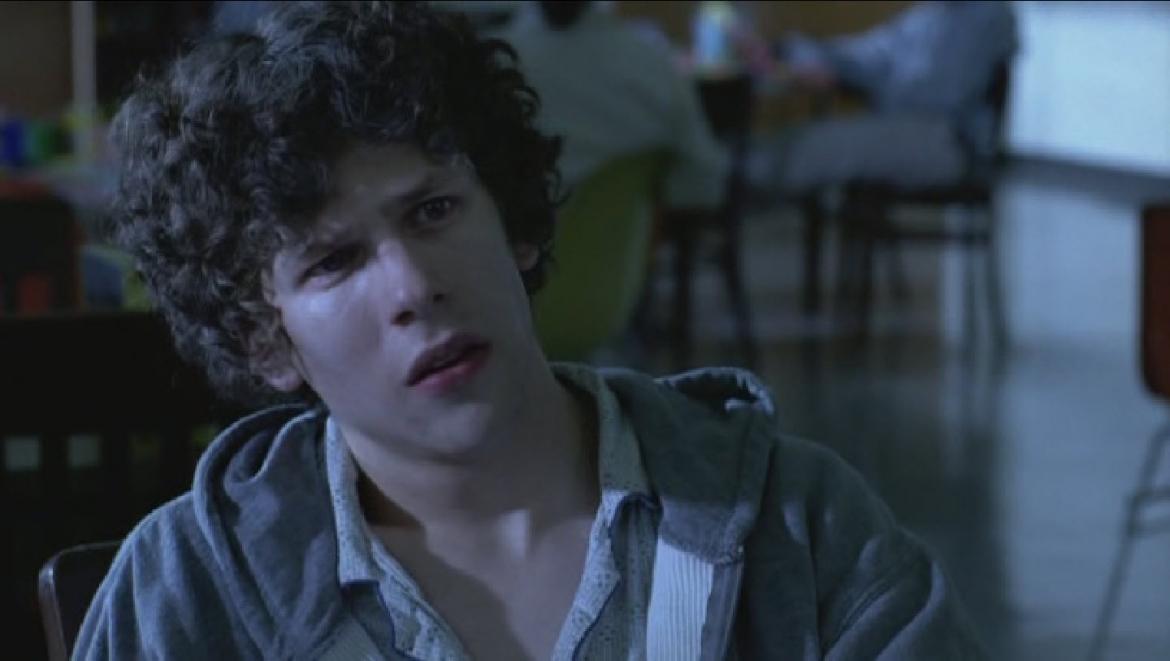 Back in the day (?) the roommates and I were on a Denzel Washington kick. We went through the higher tier/more accessible films quickly then moved on to the task of uncovering the true gems. It was on that fateful bargain bin run in early spring that brought 1984’s “License to Kill.” There he was, regally poised on the cover of the DVD, his symmetrical of symmetric faces glowing up at us sporting a dashing moustache. But we had fallen victim to packaging fraud. Denzel had roughly 30 minutes of screen time in a supporting role with NO MOUSTACHE to be found! So when I saw Jesse Eisenberg’s head floating in a sea of grainy blacks and reds on the cover of “Camp Hell” I already knew what I was in for. This was going to be a Jewish Denzel, just waiting to pull a fast one on some unsuspecting “Social Network” fans to help make another low-budget horror film a few bucks. And sure enough, Eisenberg has roughly 5 minutes of screen time. Good on you, “Camp Hell”. But besides the questionable ethics of the Denzberg Marketing Method (copyrighted starting now), I was relatively surprised with “Camp Hell”. The film is noticeably done on the down and dirty cheap and is just full of holes, void character logic, uncertain thematics, and a penchant for thinking that if you show the audience pools of really syrupy looking blood they will be creeped out. Still, even though this may be a fast cash, devil (guffaw) may care venture there are a few bright spots and a sincerity from the filmmakers and actors that helped carry me through some otherwise dreadful material. “Camp Hell” gives us a familiar enough set up. It’s a horror film set during the summer in New England so of course we are going to camp, amirite? But this time around we have a religious retreat with the purpose of…well, as far as I can tell, putting female and male teenagers in close proximity and telling them “hands off!”. The camp is organized by a group of family’s who live within the strictures of “The Community”, a concept that is referred to several times but doesn’t seem to have a clear purpose or reason to exist. The film centers on Tommy Leary (Will Denton), a quite teen who is coping with the death of his grandfather and experiencing intensely real dreams in which he is haunted by a demon. Father Phineas McAllister (Bruce Davison) is concerned for Tommy’s safety, believing that he is suffering at the hands of the same demon that drove another boy insane years ago. As the summer continues, the campers attend square dances and religious ceremonies while Tommy’s dreams become increasingly vibrant. Directed by George VanBuskirk “Camp Hell” takes some interesting steps in its first half. The uncertainty of the demon’s actual existence and the ways the surrounding religious peers handle the situation at first seems to set the stage for an exploration of inter-generational conflict and the dangers of fundamentalism. The film also makes several interesting allusions to religious rites and sexual expression. But what at first seems to be potentially evocative quickly evaporates when the filmmakers look for more traditional scares and horror elements. The religion in question is a strange combination of a slightly militaristic evangelicalism with traditional Roman Catholic sacraments and hierarchy. I’m not entirely sure if VanBuskirk just skipped researching anything for the film or if he was attempting to create something unique for the purposes of the narrative. The children are told to be God’s warriors all the while religious radio broadcasts relate the actions of jihadist in the Middle East. But the film never quite makes any interesting connection between these similarities. It is difficult to say if VanBuskirk is trying to string out an allegory or if he is just falling back on getting enough on the screen that the audience will find something interesting to piece together. As mentioned previously, “Camp Hell” is a movie that wears its budget on its sleeves. A few scenes are grossly under lit, or the camera passes behind a tree branch and just lingers there for a while before trying to find the subjects again. At times the locations where conversations occur seem to be chosen at random, the camera rested on someone’s shoulder just moments before action is called. At times Denton seems to check out completely, blankly staring at whomever he is speaking to with anxious eyes. To be fair though, it is when the film focuses on the small, interpersonal conflicts between the teens and between the teens and their elders that feel truthful and sincere. There is one moment in particular when two of the teens are having sex that feels very honest and non-exploitative. Filmed in one shot, the act is clumsy and a little sloppy, never feeling like we are being shown this to be aroused ourselves. It’s a moment that puts the characters first and has a sweetly genuine edge. But for each step forward like this, the film shoot’s itself in the foot. It constantly undercuts itself, making really interesting statements and then supplanting the logical progression of character motivation with another visual horror element. It is like watching a river being slowly dammed; the natural flow of character and theme walled back in favor of less interesting, flat horror elements. VanBuskirk doesn’t seem to realize that the potential for horror is much more powerful when organically driven rather than through a pool of blood. “Camp Hell” may be derivative—seriously, when are horror films going to move past the “Jacob’s Ladder” jittery body parts —, a touch sloppy, and confused. But it also reminds you not to take films like it for granted and I respect it for that. And while the filmmakers may not necessarily have a clear vision of what they wanted to say in “Camp Hell”, they provide enough meaty moments to keep you alert.