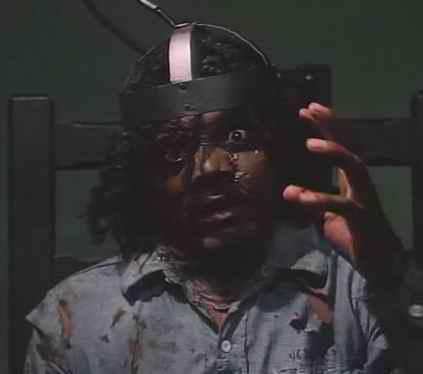 Derek Keillor crossed the wrong man. Now he’s been sent to prison for a murder he didn’t commit. The cops hate him. The mob hates him. He doesn’t have a friend in the world. But at Townsend State Penitentiary having friends can get you eaten! Anthony Franciosa IS ruthless kingpin Vic Morretti. Morretti will kill anything in his way and making an example of Keillor is his top priority. John Saxon is Colonel Gordon Burgess; he just unleashed a deadly virus into the Townsend Pen and he’s sticking around to watch the inmates eat each other. Tane McClure is the sexy savvy reporter who will stop at nothing to expose Burgess’ evil plot and her breasts. And Dennis Cole IS Derek Keillor; a lone wolf Vietnam vet with a heart of gold and a one way ticket to the… “Zombie Death House”!

John Saxon, ubiquitous near-star of many 70’s and 80’s genre films took time out between roles in “House Made of Dawn” and “A Nightmare on Elm Street 3: Dream Warriors” to collect the lone directorial credit on his vast filmography. I have seen numerous interviews with John Saxon. He presents as an erudite fellow, fluent in Italian and keenly perceptive in the modalities of film. To hear him talk, you would never guess that given one shot at leaving his vision to posterity the final product would be “Zombie Death House”. Then again, Jess Franco is a remarkable jazz musician, speaks 5 languages, was an Orson Welles collaborator and has still managed to make films like “Golden Temple of the Amazons”, “Oasis of the Zombies”, and “Killer Barbys vs. Dracula”.

There is no sense in harping on the film’s problems. 2 minutes excerpted randomly will tell you whether or not this is your kind of ride. If you can’t get a hold of a preview, here’s what you need to know: Dennis Cole is the stoic alter-ego of Reb Brown with a picture-perfect He-Man coif. Somehow John Saxon conned the Dead Kennedys into letting him use “Chemical Warfare” for the end credits. Mr. Saxon was not a stickler for details; stunt pads are visible on the floor, squibs go off prior to gunshots, Rastafarian graffiti eschews the more formal “J-A-H” spelling of the deity for a simple “JA”, and the over under on Tony Franciosa saying “Baby” is a Tele Savalas-like 204.

Despite its mammoth qualitative shortfalls and hopeless stupidity this movie does try to engineer a few new twists into the zombie/contagion formula. On such wrinkle is anal rape. How many virus films prior to 1987 can you name that feature prison rape? Another “A” for effort is awarded to the trio of writers who penciled in an unmotivated wet dream sequence so the audience could experience Tane McClure’s knockers in the waning minutes of the film. Other reasons to watch include a 60 year old man in a sports bra, a zombie butcher protecting Twinkies with a cleaver, and a director/editor team trying to sell a real-time, single angle, 3 point turn during a car chase.

The movie is fun, no doubt, but I would be remiss in my duties if I didn’t tantalize you with some of the dialog that you will enjoy during your stay inside the “Zombie Death House.” Here’s a small sample: “We got guns, we got booze, all we need is… pussy and a 3-day pass” If that doesn’t draw you in I offer: “ Got no bananas here monkey ass, keep walkin!” And finally what we’d all say if we were stuck with an annoying doctor in a prison full of flesh eaters, “Fuck a cure, I wanna get outta here!”

This film should be part of the Golan/Globus universe. The flat lighting and wide angle action shooting really brings back memories of the Jeff Speakman, Michael Dudikoff years of the Cannon Group. If you are looking for style, grace or a unique perspective, go elsewhere. If you are looking for a good hearty helping of American Dumbed Down, grab a Bell Beefer and Lowenbrau and settle in for ninety eight minutes of Velveeta.