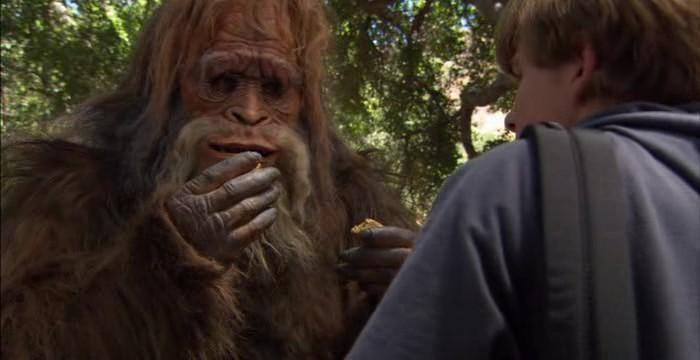 I love it when films surprise me. I’ll admit, I picked up this movie expecting a complete turd. How could a film shot for $40,000, distributed by Troma and simply titled “Bigfoot” be anything but a non-stop crap-fest? I had expectations. I expected to see a guy running around in a super fake gorilla costume, slaying poorly developed characters in comical fashions. I expected to laugh out loud at inane, ridiculous dialogue. I expected to hate this movie, but really enjoy hating it. I was expecting “Troll 2: Bigfoot Takes Nilbog”. Instead, I got a surprisingly competent little film that had some surprising strengths.

The surprises didn’t stop there though. The opening felt familiar. After we get a montage of deer, raccoon and rabbits peacefully frolicking in the woods only to be slaughtered by a surprise Bigfoot, the film shifts gears and follows a Ford Bronco II traveling down some familiar looking roads. I knew the song playing, but knew that it’s not a well-known song and there’s a very specific reason why I know it. Then it dawned on me. That song was that “Michael Stanley Band” song about Cleveland. Those roads were familiar because I’ve driven them. Holy shit! This movie was shot 20 minutes away from my office!

“Bigfoot” takes place in the Mentor Headlands. Residents of beautiful Cleveland, Ohio know the Mentor Headlands as being the only beach on Lake Erie where we can swim without having to worry about potentially flammable water, razor sharp zebra mussels or “combined sewage overflow” (urban planning speak for “shit”). It’s also surrounded by some pretty legit marshlands, where the titular Bigfoot stalks it’s prey in the film. Rounding out the cast are Jack, a military serviceman whose recently been discharged from the military, his best friend Bob, sheriff of the Headlands and Sandy, a park ranger who works in the marshlands. The plot is pretty simple stuff, deer have been showing up mutilated on the headlands more frequently and eventually so do mutilated humans. The three investigate the goings on and eventually discover a pesky Bigfoot is behind the mutilations and murders. It’s funny, because I thought the occasionally dismembered deer corpses that would show up in my backyard as a kid were caused by coyotes, but Bigfoot makes so much more sense.

Despite not being an incredible film, “Bigfoot” does some things very well and the film-makers should be really proud of what they’ve done here. I’ve seen a lot of terrible direct to video releases, and most of them fail in the same ways. One of the biggest flaws I’ve seen in these kinds of movies relates back to the characters. In most super low budget films, the characters don’t feel like people. They usually ring hollow and their dialogue doesn’t sound real. This film does not have that problem. The characters in this film feel incredibly real. It could be because I live in Cleveland, but I know these people. Their dialogue sounds like actual conversations (with an exception here or there). Most of all, they’re genuine. This goes a long way towards alleviating some of the other issues the film has. While it’s paced pretty poorly, since you can actually relate to and get the characters, it’s not painful to just hear these characters talk and interact.

I also have to tip my hat to the film-makers use of practical effects. All too often these super low budget films will blow half of their budget on absolutely atrocious CGI. Here, all the effects are practical and look pretty good for being done so cheaply. The Bigfoot is just a guy in a suit, but it doesn’t look nearly as hoaky as some of the shit you’d see on the Syfy channel on a Saturday afternoon. Personally, I think the film would have benefitted from not showing the creature in full and in direct light as much as it does, but still, the effects are pretty good for a film this cheap.

For being a $40,000 Troma film about Bigfoot, I was pretty surprised that the film was able to pull off by way of having some subtext and meaning. While delivered somewhat bluntly, the film explains that the recent sudden surge in the population of deer in Northeast Ohio (a very real problem) and the Bigfoot sightings are being caused by urban sprawl displacing more and more wildlife and causing them to have to adapt to living closer to humans. As someone who totaled a car last winter after hitting a deer and later having a nice walk in the park with a date take a crazy scary turn after some coyotes started howling nearby, I can dig that. The film also later starts to get into the diminishing fish stock in Lake Erie and other ecological problems in the region. I can appreciate that the film takes on an issue and does a decent job of making the creature an allegory for a very real problem the region’s facing.

All those positives aside, "Bigfoot" does have some very real problems. As I mentioned before, the film does have a bad pacing problem. While it’s never outright boring, it is slow. I’m also saying that as someone who felt some nostalgia watching this film due to the setting, so your mileage may very well vary on that point. The ending is also completely ridiculous and doesn’t fit the mood of the film at all. After an hour of being a pretty measured, restrained film, Jack decides to take on the Bigfoot mano-a-mano, arms himself to the hilt with an insane amount of guns and explosives and tears across town on a motorcycle. The film then goes into “Commando” territory, when Jack and the Bigfoot fist fight and Jack starts dropping one liners. It’s pretty out of place and just feels off. There's also some pretty bad attempts at comic relief around the 50 minute mark that are just groan-worthy. As a result, the last 30 minutes take a pretty big dip in quality.

Ultimately, "Bigfoot" is a lot like the Northeastern Ohio area itself. While not being perfect, it’s real. The film is genuine and feels like a labor of love. On such a limited budget, it manages to do a lot of difficult things very well. The characters feel like real humans and it manages to take a ridiculous plot and make it mean something. Unfortunately, at the end of the day, it is an amateur effort and suffers from some amateur problems. The acting is pretty iffy and the pacing is way off. It also feels as if the writer had a difficult time figuring out the climax and took the action film shortcut. At the end of the day, I don’t know if you’ll enjoy this as much as I did if you don’t have the connection to the region that I do. Without that nostalgia there, the pacing issue may even larger for you. However, if you’re in a mood where you absolutely have to watch a movie about Bigfoot, you can do a whole hell of a lot worse than this one.