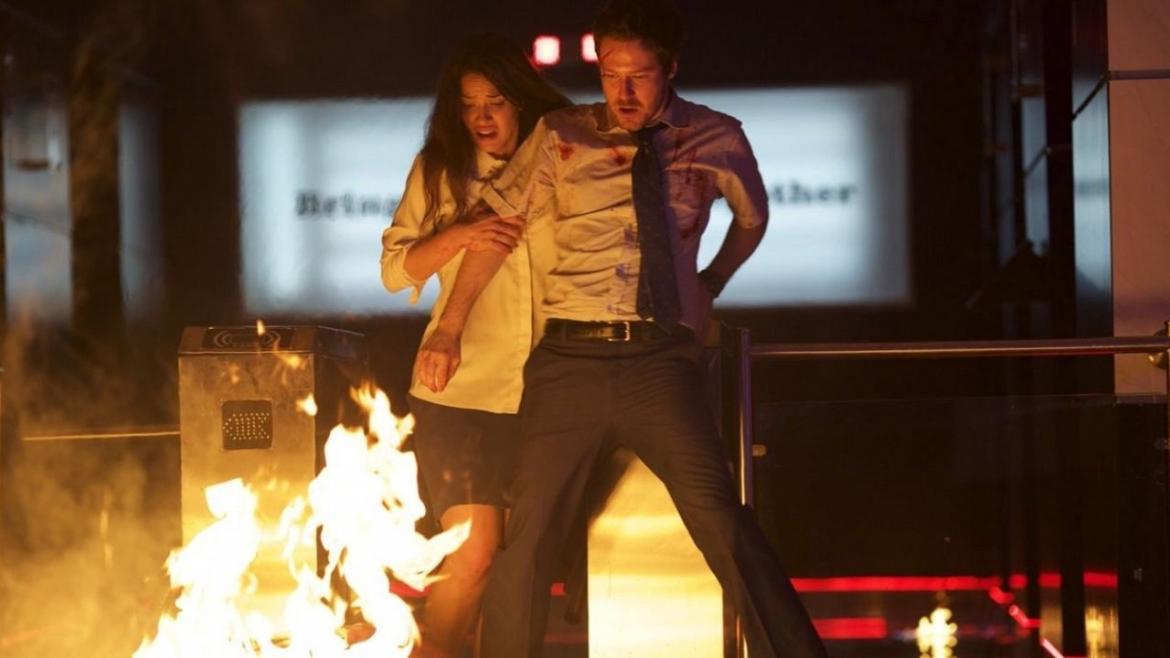 2016 was the year of John Gallagher Jr. With the release of both 10 Cloverfield Lane and Hush, genre fans everywhere were introduced to the indie darling and allowed to see his range as an actor. The shift from a lovable and charming small town southern man to a sadistic killer is quite a turn, and the proximity of the films’ release dates made the shift even more stark. I certainly came into 2017 wondering what we would get from him next, and I didn’t have to wait very long.

For those who watched Newsroom, John Gallagher Jr. is no stranger. He played Jim Norton, a love-sick and (mostly) lovable producer. The Belko Experiment seemingly posits a world where Jim never got that job at ACN, or maybe needed a break after being repeatedly rejected by Alison Pill. Moving from New York to Colombia, where he secured a job at Belko Industries, an international nonprofit that helps American companies outside of the US hire American employees. Jim (who is now going by the name Mike Milch) has a beautiful girlfriend and seems to be well-liked by his co workers. Score! Until he shows up to work one day and a mysterious voice over the building’s PA system announces that Belko employees must start killing one another. Mondays are the worst.

Written by James Gunn (Guardians of the Galaxy, Dawn of the Dead), The Belko Experiment has been hailed as a cross between Office Space and Battle Royale, and that comparison feels largely apt. The movie takes time in its opening sequences to introduce us to some of the company men and women and gives us a chance to learn a little bit about their relationships with one another and dynamics within the building. Everyone seems to really genuinely get along with one another, at least until they start murdering each other.

This certainly isn’t the first time we’ve seen a movie try to tackle the question of how far people will go to preserve their own lives, but it certainly does with some dexterity. When members of the office start splitting people up by their age and whether or not they have young children, it is eerily reminiscent of thought experiments done in high school and college classrooms, albeit with much more devastating consequences. Likewise, the film does a good job of showing how genuinely challenging it would likely be to murder some of your coworkers in cold blood, particularly in that same scene.

The pacing and writing of this movie are both very well done, and its acting and score certainly place it within the tradition of earlier B movies. One needs look no further than the Spanish translation of Aretha Franklin's “I Will Survive” that plays under the opening credits to know exactly what you’re in for. Small moments of absurdist humor break the tension throughout.

The movie isn’t without foibles, I would argue that the hyper-realistic nature and use of the violence doesn’t entirely fit within this movie and sometimes feels fetishized rather than seeking to show the bruatlity of the situtation, and that the ending certainly packs less of a punch than one might hope for, but it seems to know exactly what it is and it goes for it. So next time you're having a hard day at work just think, it could be worse.