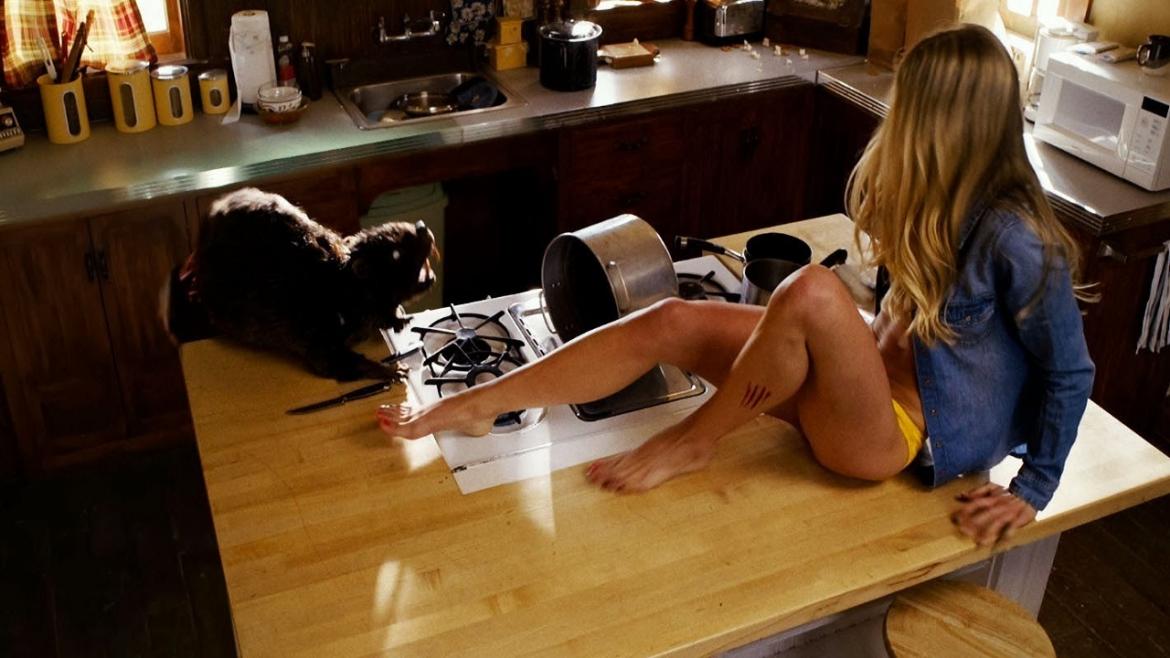 If you have ever wondered what you get when you take a creature feature, a zombie pic, and beavers and mush them together, your answer is finally here.

Zombeavers follows friends Zoe, Mary, and Jenn up to a secluded cabin in the woods as they embark on a girls-only weekend. Jenn is reeling after receiving a photo of her boyfriend, Sam, cheating on her at a party with an unidentified girl. The girls are dedicated to the mission of cheering up their friend and getting her mind off her jerk of a boyfriend, that is until all of the boyfriends show up, with Sam in tow. They discover what they think is a rabid beaver in the cabin shower and, after beating it to death with a baseball bat, place it on the porch in a pillowcase. They remain nonplussed when the carcass is gone in the morning, until they are ambushed by a horde of what they discover are zombified dam-builders.

Much like other films within this subgenre, the violence begins with a pretty intense scene that the characters survive, not entirely unscathed, or whole, before things die back down and emotional drama starts to pick up as the group attempts to regroup and waits for another attack. More information comes to light about Sam's infidelity and the group starts to turn on one another quickly as the sun goes down and the impending danger becomes more immediate.

Female horror fans may find Zombeavers to be somewhat alienating. There are just as many vagina jokes as you would expect, very few of which are funny. The three female characters are in various states of undress for absolutely no reason for much of the short run time, and are terribly underwritten. They start out hoping to help their spurned friend, only to leave her alone with her ex in favor of having sex with their own boyfriends, and eventually just hope she'll get over it. The entire plot arc about the cheating boyfriend ends up being totally useless, as none of the characters are really likable enough to care about in the first place.  This film essentially plays like a couple of frat guys sat down to make a satire of a horror film, and it sort of makes sense. Director Jordan Rubin has no previous directorial credits on a feature film, but a ton of writing credits for things like Crank Yankers, Guys Choice Awards, and a few MTV Movie Awards. He wrote the screenplay in collaboration with Al Kaplan whose IMDB page consists primarily of TV movies that he composed for, with titles like Piranhaconda and Dinocroc vs. Supergator. The end result feels more like a laundry list of tired horror tropes, rather than a subversion or critique of things we've already seen.

That being said, the movie does have some redeeming qualities. Much of the snarky humor does hit its mark and will give you a good chuckle. For example, there is a hilarious scene that is staged and shot like a giant game of whack-a-mole, with zombeavers attacking through the floorboards, that is pure magic. The animatronic beavers are phenomenal and the gore factor is campy in the best way. The infected humans even grow beaver teeth! And if all this isn't enough to draw you in, the film starts and finishes with camoes by Bill Burr and John Mayer as bearded medical refuse disposal men. If you're looking for a horror movie to watch with friends on a Saturday night and don't much care about the sophistication, this is a fine choice.