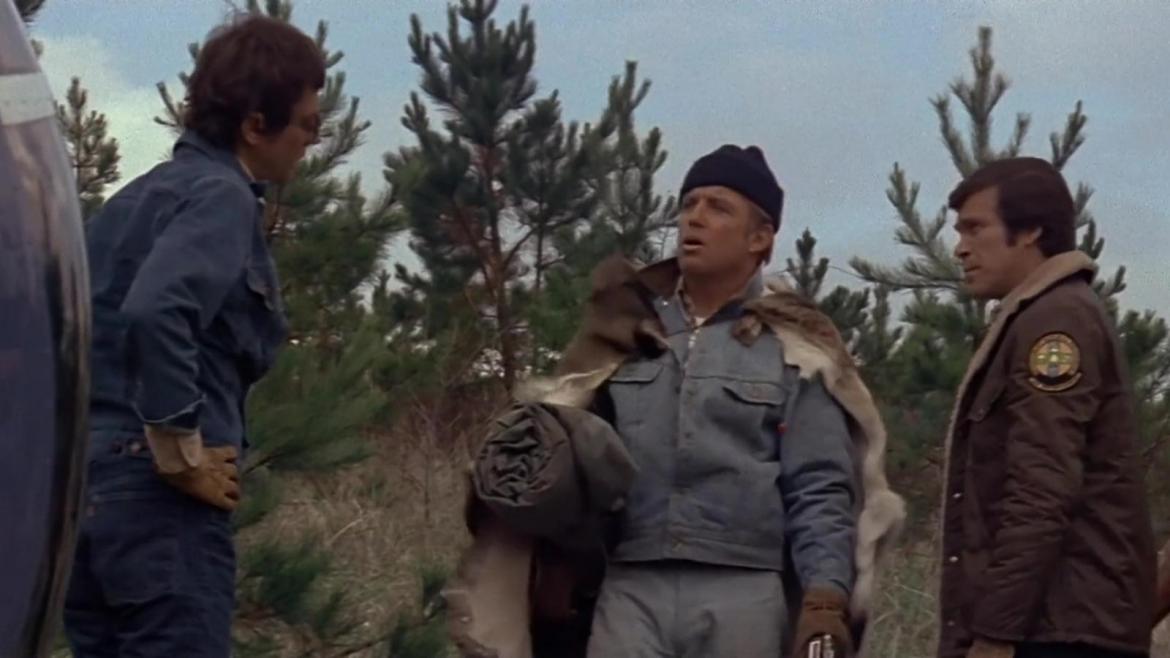 There have been many thought-provoking works exploring the seemingly never-ending adversarial relationship between humans and the natural world. Grizzly is not one of those works. Instead, 1976’s Grizzly – about a killer bear tormenting campers at an unnamed national park – features a scene where two hikers return to their campsite after a nearly ten-mile-long trek through the woods and begin tending to a mysteriously already-lit campfire. Later, a female park ranger announces her intent to dip her feet in a nearby stream only to start unbuttoning her top.

That’s Grizzly, an unabashed knock-off of Jaws that retains most of the latter’s plot structure but none of its tension, humanity, or skillful story-telling. While there may not be a USS Indianapolis scene here, there is a character who presumably collects a salary to cover himself in animal pelts and wander the forest with no supplies or direction. It’s this (often accidental) idiosyncratic streak that elevates the film – just barely – above forgettable imitation and into cult classic territory.

Filling the role of the dedicated but marginalized public servant in Grizzly is the singularly-named Kelly (Christopher George), the park’s chief ranger. Kelly knows that, when hikers start turning up “horribly” mutilated at the teeth and claws of what seems to be a grizzly of prehistoric size, the only solution is to close the park and hunt the bear. Horribly, in this case, is dependent upon your ability to look past the dainty blood-smearing allowed by the film’s low budget and imagine the real damage such a beast could inflict. Naturally, he runs up against a fat cat who won’t hear of such a thing – until it becomes almost tragically too late.

Grizzly does, at times, attempt to recreate the nail-biting, first--person stalk sequences of Jaws, even adding a John Williams-inspired theme to boot. Director William Girdler doesn’t commit though, abandoning it in favor of jump scares where his monster pops up out of nowhere. During one particularly baffling sequence, a character is attacked, presumably killed, and then buried by the bear. Only, the character isn’t dead. He digs himself out of the ground and then, as if conjured out of thin air, there’s the gigantic, yet oddly stealthy bear again, ready to launch a second attack.

Grizzly is the result of a simple equation. You like Jaws and want to do something similar but you don’t have a Spielberg, Williams, Scheider, Shaw, or Dreyfuss lying around. Take them out of the picture, and this is what you get. The movie isn’t as nearly scary or as memorable as its ocean-dwelling inspiration, however it has enough chuckles and low-budget moxie to survive.