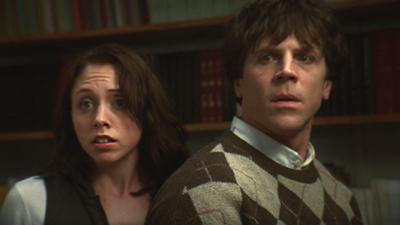 Calculated, intentional B-movies specifically designed for cult appeal are almost always a hit and miss affair. Most of the filmmakers who possess aspirations for camp stardom generally aren't well-versed in the art of comedy, a crucial element needed to assure that these films operate efficiently. Making people laugh is both a science and an art form, and from what I can tell, it's a rather difficult mission to accomplish if you don't know what you're doing. An evening spent with R.W. Goodwin's 2009 retro sci-fi flick "Alien Trespass" will tell you everything you need to know about the subject. Or, you know, you can simply take my word for it. Either way, you're good.

When I received a screener for director Guy Davis' cheesy collegiate comedy "Zorg and Andy," I was, to be perfectly frank, expecting the worst. I haven't had too much success with low-budget comedies with a slant towards the ridiculous here lately, especially those which attempt to breed good-natured laughs with goofy 50's-style science fiction. Much to my surprise, Davis' snappy little picture is solid stuff from start to finish, thanks in part to a finely-tuned performance from star Scott Ganyo and a wonderfully warped script from writer V.Z. Montengo. It's certainly no "Lost Skeleton of Cadavera," but then again, what is?

Following a peculiar animal-related incident which leaves his academic future in jeopardy, troubled student and professional loser Andy Monroe (Ganyo) is forced into a work study program deep within the bowels of the Kungsbaden Museum. His job: Make sure all of the specimens locked away inside the Materials Conservation department are attended to and appropriately cared for. Lacking any sort of common sense, Andy immediately causes an impressive array of troubles, much to the dismay of his lovely supervisor Jen (Kate Rudd).

Things take a serious turn for the worse when Andy, entranced by a mysteriously beautiful woman, unknowingly hands over a strange and extremely important fertility statue to a pagan cult with a penchant for sacrificing humans in the Economics department. So begins our bumbling hero's strange and often hilarious decent into madcap absurdity, an adventure sprinkled with flesh-eating beetles, mind-altering stiletto heels, and a very odd man wearing an extremely unsettling Halloween mask. And, yes, it’s every bit as weird as my poorly-written synopsis makes it sound.

Director Guy Davis and company have crafted a smart, cleverly-written comedy that operates on a much higher level than other like-minded endeavors I’ve encountered over the years. Montengo’s dialogue is always witty and spot-on, punctuated by razor-sharp editing and several humorous performances from the film’s insanely talented cast of up-and-comers. Not every joke is a zinger, mind you, and there are certainly some wooden posts masquerading as actors, but these complaints are miniscule when compared to the picture’s numerous strengths.

“Zorg and Andy’s” ace in the hole, of course, is Scott Ganyo. Surprisingly, I remember him from another short film I watched a while back, namely Jakob Bilinski’s 70’s-inspired action flick “Foxxy Madonna vs. the Black Death.” He's pitch-perfect as the film's socially-awkward hero, a role he infuses with a surprising amount of sweetness and intelligence. Yes, he's a moron, and, yes, he's easily swayed by the opposite sex, but deep within his heart, Andy's a pretty good fellow. Ganyo definitely makes it easy to root for the guy, even when he's using ancient coins in modern vending machines. That takes talent.

Point blank and from the hip: "Zorg and Andy" is a fantastic microbudget comedy, a perfect marriage of cheesy exploitation, silly science fiction, and brainy humor. Davis and crew should be extremely proud of their accomplishment; these insanely talented individuals have somehow managed to pack an absurd amount of fresh, well-executed material into a breezy 60-minute package, a feat that's even more astounding when you take into consideration their complete lack of funding. Which just goes to show that the only tools required to craft an entertaining motion picture are talent and dedication, plain and simple. Imagine that.