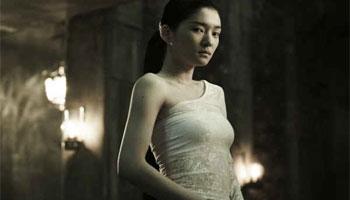 Over the past few years, I've noticed that horror filmmakers the world over have begun to embrace bizarre, non-traditional concepts upon which to build their potentially horrific cinematic endeavors. From human centipedes to carnivorous vaginas to zombie sheep to telekinetic tires with murderous intentions -- the ideas pouring out of the next generation of genre fanatics just keep getting stranger and stranger. It's not that I'm against weird ideas and peculiar setups, mind you, but if you're going to attempt to do something completely different and highly unusual, you'd better make sure you bring your "A" game. I'm just saying.

Although I'm not surprised that someone has based an entire motion picture around the art of Yoga, I am shocked that it's taken this long to get here. South Korean director Jae-yeon Yun's 2009 horror outing "Yoga" (aka "Yoga Hakwon") takes this insanely popular form of exercise and mediation and incorporates it into a twisted tale about the quest for beauty, the price of eternal youth, and all supernatural stops in-between. On the surface, the picture seems like your typical Asian horror movie, one that just so happens to feature several lithe Korean ladies executing a number of very complex postures. Peel back the layers, however, and you'll soon discover there's nothing purring under the proverbial hood.

Think of "Yoga" as a female version of "Fight Club". What's the first rule of this diabolical yoga academy? You don't tell anyone about what goes on inside the yoga academy. Not only do you have to surrender your cell phone during your extended stay in the school's intensive training program, you're also forbidden to schedule an unauthorized snack break, wash yourself immediately following your sweat-soaked session, and, most importantly, you're forbidden to look in the mirror. Doing so, of course, results in a grisly death, which is generally followed by echoing screams and ominous music. These moments are jarring, and often seem to come out of nowhere. Saying they're an afterthought is excessive, but it's not an entirely untrue declaration.

Problem is, almost all of the spooky stuff is crammed towards the back end of the picture. By the time the film decides it wants play rough, you've been effectively lulled into a heavy-lipped Wonderland courtesy of the story's stable of irritating characters and pointless subplots. Does the school's unnerving owner, the mythical Kahn Mi-hi, really need that much of a back story? You could argue that these scenes help establish the aging beauty's desire for eternal youth and her willingness to achieve this feat at any cost, but watching extended flashbacks that ultimately lead nowhere isn't my idea of entertainment. If anything, it only serves to spoil the atmosphere and kill the mood.

Despite the occasional bouts of boredom and the complete lack of sympathetic characters, "Yoga" is a joy to watch, visually speaking. The last half hour is suitably intense and laced with some truly horrific imagery. I'll be honest: Watching these self-centered airheads receive their respective punishments for breaking the instructor's simple rules was oddly amusing to me, mostly because I'm a sick bastard who thoroughly enjoys seeing bad things happen to terrible people. Generally I'm not this harsh and mean-spirited, but this dodgy collection of paper-thin idiots rightfully deserves my violent animosity.

I seem to be in the minority when it comes to "Yoga". From what I've read, it's one of South Korea's more successful horror films, and it's certainly easy to understand why so many people have enjoyed it. The cinematography is simply outstanding, the score is subtle yet effective, and the story is a little different than the sort of things we've seen oozing out of the region over the past few years. Despite all of these positive elements, the film simply couldn't work its magic on me, and for some strange reason, I feel I may have missed the point altogether. It wouldn't be the first time something like this has happened, and I doubt it will be the last. "Yoga" might be scary to some, but from where I'm sitting, it's downward-facing dull.