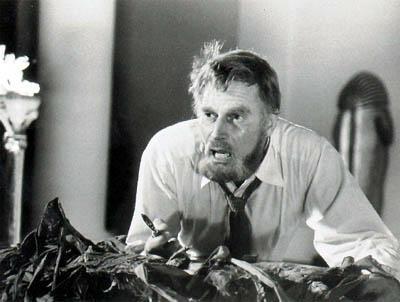 Charlton Heston was one hunky piece of bare-chested American made ape flesh. That he was a lanky, square-jawed, pillar of machismo may explain his appeal to some extent but if we are being honest his fame was built on sweaty pecs. In fact if one considers just 2 of his 127 credits “Ben Hur” and “Planet of the Apes” his bare torso screen time still eclipses the shirtless tally of the collective filmographies of all the actors in “The Expendables”. In 1980 Chuck Heston was approaching the tail end of a leading man run that lasted the better part of 30 years and included turns as John the Baptist, Moses, and the unforgettable Whip Hoxworth. At 57, it seemed unlikely that old Judah Ben-Hur would again be called onto unveil his swarthy breastplate to the world, but fans who admire the man’s oiled up skin were in for one more treat.

“The Awakening” sees Heston playing determined Egyptologist Matthew Corbeck, an academic cum treasure hunter who is looking for the lost tomb of an obscure and reputedly evil Egyptian queen. His pregnant wife Anne is begrudgingly whiling away her days in a not-so nearby villa as Matt scours the countryside side for Queen Kara’s tomb with his almost attractive assistant Jane Turner. Eventually Corbeck and his crew unearth Kara’s tomb. Simultaneous to this event a nearly comatose Anne miscarries in a Cairo hospital. Unbeknownst to Matt, moments after his baby is pronounced dead, he pops the cork on Kara’s sarcophagus and many miles away the deceased baby Margaret is miraculously restored to life. When Anne discovers that Matt returned to the dig as she lay catatonic in her hospital bed she leaves with Margaret for the U.S.

Eighteen years go by and through some shady dealings Matt manages to get Kara’s mummified corpse out of Egypt and back to his stomping ground in London. He also manages to get his daughter, theretofore sequestered by her spiteful mother, to visit him in London town. Margaret is bitten by the same bug that her dad is, namely the prophecy of Kara’s second coming. Together they decide to go and see Kara’s tomb in Egypt. While there they discover the previously missing canopic jars (urns containing Kara’s vital organs). Now completely obsessed with The Queen’s resurrection, Matt and Margaret smuggle the jars back to England so that they might complete a ritual and bring the cruel queen back from the beyond. Needless to say things go pear-shaped pretty quickly.

This movie is not quite the lost treasure that I remember it being. Thirty years have not been kind to the pacing and some of the acting, especially Stephanie Zimbalist as Margaret is too Shatner-esque. The latter accusation is interesting considering that it is Chuck Heston and Bill Shatner that seem to share the slack-in-tow-line style of dramatic interpretation. Not to worry Big Charlton has his fair share of performance potholes. Of course you may not notice if you are a fan of wet, bristly man-busts. I would guesstimate that our leading man goes without a shirt or at least unbuttoned for something like 25% of the film; no small feat for an HGH-less beefcake pushing 60. No small feat for any viewer that is not partial to the old ‘otter’ look being offered up here.

If it seems like I am spending an inordinate amount of time on the old man’s lack of wardrobe it is because at its core “The Awakening” is not that interesting. Even less so when one considers that the formula is exactly the same as Hammer’s delightful 1971 cleavage fest “Blood from the Mummy’s Tomb” with Heston’s hirsute bosom standing in for Valerie Leon’s huuuge…tracts of land.

The film does have some nice moments and technically speaking the sound design is really well done. I also appreciate director Mike Newell’s willingness to take more than an informational approach to the locations by lingering on landscapes, allowing the dusty Egyptian vistas to come to life and involve the viewer with a sense of place. As far as the horror elements go, the miscarriage/ dead baby sequence is truly chilling. Beyond that a couple of inventive kills dot a map of non-magnetic drama.

In the final analysis, the other adaptation of Bram Stoker’s “Jewel of the 7 Stars” that being the aforementioned “Blood from the Mummy’s Tomb” is so much more fun than this film. The drag in the narrative, the awkward performances and the relative lack of action throughout relegate it to the realm of utterly forgettable. This may be a surprise to some viewers coming from a director like Newell who has made some memorable films like “Donnie Brasco” and “Four Weddings and a Funeral”. But a closer look at his filmography and it becomes clear that even Newell can find it hard to manage elements (“Prince of Persia: The Sands of Time”). Do yourself a favor skip “The Awakening” and check out Valerie Leon’s incredible body…of acting talent. Or if you are really thirsting for some Heston go back to 1958’s “Touch of Evil” or 1982’s “Mother Lode”