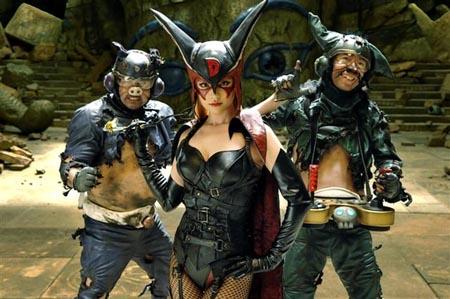 Contrary to what you may have read on other genre-related websites, "Ichi the Killer" mastermind Takashi Miike has not sold out. The diverse Japanese filmmaker's unique cinematic sensibilities are very much alive and well, although certain questionable elements have been restrained and subdued as of late. I'll be the first to admit that Miike's recent output isn't nearly as warped or outrageously deviant as the films which brought him cult stardom, but they still retain the director's penchant for twisted characters, unusual scenarios, and over-the-top action. He's just matured, which is to be expected from anyone with a healthy, functionally creative mindset. Insert snooty sound effect here.

Miike's latest creation, the 2009 superhero epic "Yatterman" (aka "Yattaman"), might seem like a kid-friendly, candy-coated sliver of confectionery cinema on the surface, and for the most part, you'd be right. That said, it's still not the sort of squeaky clean, Disney-manufactured family fodder you're likely to find cluttering American movie theaters around Christmas time. After all, not too many Pixar films these days feature an enormous, well-endowed female robot reaching a violent sexual orgasm courtesy of a large mechanical canine and his legion of army ants. Miike may have shifted gears a bit, but he's still cruising down his own twisted little highway at extremely dangerous speeds.

Based on the popular anime television program from the late 70's, "Yatterman" follows the light-hearted adventures of two justice-protecting superheroes -- Gan and Ai, specifically -- who must keep the mysterious Skull Stone from falling into the nefarious mitts of God-like villain Dokurobe, the latter of whom would love nothing more than to harness its powers. To aid him in his neverending quest to locate all four pieces of this incredibly powerful relic, Dokurobe enlists the services of The Doronbo Gang, a band of low-level misfit thieves led by sultry bad girl Doronjo. As both parties race to retrieve these highly-coveted magical items, they quickly discover that reuniting the stones might not be in the world's best interest.

Truthfully, "Yatterman" doesn't have much of a plot to speak of, nor does it pretend to. The film's basic formula is as follows: Our heroes encounter the film's strange assortment of villains in a visually rich location, a battle between the two parties promptly ensues, lots of expensive property damage is dealt to both sides, the bad guys are punished by their cruel and unusual leader, the good guys repair their giant mechanical dog -- and then they start the whole process over again from the beginning. Various changes are made in an attempt to separate each set piece from the one before it, but you're basically eating the same meal over and over again for nearly two hours straight. Thankfully, it won't give you the runs.

Thing is, I really don't care that the movie is sadistically repetitive, or that Gan and Ai are pretty much useless as crime fighters. Miike has done a fantastic job of dressing this relatively stupid premise in bright colors and imaginative albeit crude computer-generated imagery, giving you plenty to gawk at when the story isn't fulfilling your intellectual needs and desires. Of course, all of this nonsense is presented with the subtlety and nuance of a 24-hour "Might Morphin' Power Rangers" marathon sponsored by Red Bull. It's fast-paced and mildly confusing, but it's breathless blast from start to finish. Believe it or not, even the oddly alluring musical numbers are entertaining. If you knew my stance on musical numbers in superhero movies, you'd understand the gravity of this statement.

Is "Yatterman" my favorite Takashi Miike movie of all time? Not by a long shot. It is, however, an entertaining ride regardless of the numerous speed bumps encountered along the way. Those who boldly proclaim that Miike has lost his edge haven't seen the movie yet, because if they had, these individuals who fully understand that "Yatterman" is just as silly and over-the-top as his previous efforts -- minus the rape, arterial sprays, and abhorrent sexual material. Consider this just another splash of cinematic paint on a very unique, very diverse canvas. Die hard fans of "The Great Yokai War" and "Zebraman" shouldn't have any complaints whatsoever.