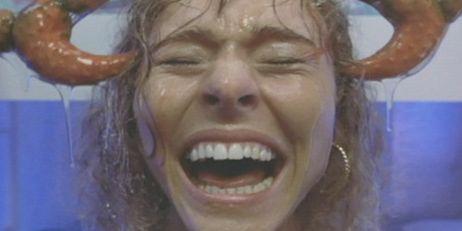 If you’re anything like me, after listening to the recent HorrorHound Weekend Episode, you probably went and scoured the Internet for a film called “Plankton”. Actually, I know you did, because there was a short wait to get the DVD from Netflix. Demonstrable evidence of something that I like to call the “BGH Bump”. Regardless of the reason why there was a wait, the allure of a movie that sounds so amazingly awful is hard to ignore. Truly awful yet entertaining films are hard to come by. And unfortunately, more often than not, promising bad movies wind up being simply bad. Fear not BGH Readers, for “Plankton” (also known as “Creatures from the Abyss”), does not disappoint. Watching “Plankton” is like going back in time to an era where hair was big, special effects were an oxymoron and horror was best at it’s worst.

“Plankton” starts like any good shitty horror film from the ‘80s (despite the fact it was made in the ’90’s), with some teenagers trying to get laid. In this case, they’ve decided to take a motor raft out for the day. How that ends in anyone getting laid is a mystery to me as you would think that being on a cramped inflatable raft in choppy seas with five of your friends would be a poor setting for a tryst, but maybe I’m just doing things wrong. Moving on, our poor protagonists never get to have their crazy sexual romp on the high seas as they run out of gas (don’t you hate it when that happens?). However, they are in luck as they just happen to paddle themselves to within swimming distance of a conveniently located yacht.

While all this is going on, the viewer is treated to some flashes of what looks to be a fish attacking some dorky guy in a lab. In a thunderstorm. Which also happens to be in that lab. It’s weird. When they get closer to the yacht, our protagonists find a chewed up corpse in the water (gee, can it be related to the fish attack we keep seeing?) and do what anyone would do in that situation; completely shrug it off and climb aboard the creepy, abandoned yacht. I mean they’re trying to get laid, it makes sense.

After climbing aboard the yacht, it’s immediately clear something is horribly wrong. Nobody is around, there’s a weird lab that’s full of spooky looking fish and there’s what looks to be an Italian discotheque circa 1985 (complete with the mysterious white powder) below deck. Again, despite the multitude of signs to get the hell out and try to get back to shore, our teenagers do the most logical thing; cook a full fish dinner, snort some of the mystery powder and hook up despite the fact there’s a creepy looking dude with a mustache that doesn’t speak any English who keeps caressing a syringe while staring at them and breathing heavily from behind the staircase. Obviously.

Of course, shit hits the fan when one of our teenagers, let’s call him Mullet, finds the ship’s log and discovers that it’s a Deep Sea Research Vessel that’s filled with flesh-eating fish that can fly through the air. Yes, deep sea fish that can survive out of water and fly through the air, because, you know, that’s a necessary survival skill for creatures that live miles below the ocean surface. Unfortunately for him, he discovers this too late as another one of our teenagers, let’s call him Stamos, is busy getting busy with one of the girls, which somehow triggers a transformation in him, turning him into a giant half-fish, half-lobster creature.

That’s it, I give up trying to explain this.

The plot of “Plankton” is absolutely absurd. It’s filled with so many expository dumps it made my head spin. And yet, somehow none of them make any of this fit into context. But I didn’t care because somehow it all made so much sense. Of course the Stamos looking dude would explode into some sort of lobster monster while having sex, how could you not have that happen in a film this bad? If you just sit back, turn your brain off and just roll with what’s happening on screen, this is a super-entertaining movie. Trying to apply things like logic and sense to it will just make your head hurt, so don’t. Just check out and enjoy.

And if you do that, you’ll find so much to love about this movie. In many ways, “Plankton” bares more than a passing resemblance to another classic of crap cinema, “Troll 2”. Both are Italian productions with totally non-sensical plots. Both contain hilariously awful dialogue. Both are chock full of special effects that will induce fits of laughter. Yet in some ways, “Plankton” is almost better than “Troll 2”. While the dialogue in both is delivered entertainingly poorly, “Plankton” also happens to be dubbed, which makes the effect even better. You also get the line “how long have you been fucking the fish, doctor?” which might go down with “frankly my dear, I don’t give a damn” in the all-time great movie quotes hall of fame. While the titular Trolls in “Troll 2” are essentially burlap sacks with masks scotch-taped to them, they’re nothing compared to watching a man explode into a lobster-man mid-coitus. And then there’s the scene where his partner gives birth to a substance that looks an awful lot like tabouli. It’s unique to say the least.

Though “Plankton” is missing something. It just doesn’t have that same heart that a lot of these terrible films have that make them endearing. While it has all the makings for a truly transcendent terrible film, it just falls ever so slightly short. Maybe it’s the slight pacing issue, maybe it’s the dubbed dialogue, but that human element present in films like “Troll 2” just isn’t here. In “Troll 2”, you can feel the love. You can kind of see the Hollywood dreams in the actors eyes, despite their phenomenal lack of talent. It feels like the director has coddled this film like a favorite child and is proud of the end result. Here, there’s a sense of distance. It’s a shame almost. I know it’s not an objective concept that can be measured, but it gives the film a flat feeling. You know how you can put “Troll 2” on in front of the staunchest of horror hating friends and they’ll be laughing in minutes? That won’t happen here.

With having seen so many horror films in my 25 years on this earth, it’s refreshing to still be able to find a film like this. Every time I see something like this, I can’t help but wonder, “is this it? Was that the last hilariously bad movie out there for me to find?” It’s sad to say, but I feel like the world is running out of films like this. Every time a video format is phased out, we lose more and more of these low budget gems. With DVDs quickly going the way of the VHS and the ridiculously high cost of converting poor quality films to Blu-Ray, films like this may soon be totally forgotten. But until that day comes, I’ll be enjoying every minute of these crapfests for what they are; a relic from a day and age that’s come and gone, yet something that still entertains over 20 years later.