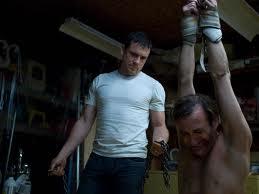 The story is a familiar one that, handled differently, could easily be played as exploitative fun instead of existential anguish. It follows a surgeon whose 8-year-old daughter is kidnapped, raped and murdered by a pedophile as she is walking to school one day. The father is wracked with feelings of guilt and when the man suspected of killing his daughter is caught by the police he comes up with a plan to enact his revenge in ways that the criminal justice system would never approve of. He kidnaps the pedophile as he is being transported to court and takes him to a remote location. He informs the police that he plans to torture the man for seven days before he kills him, after which he will turn himself in. What follows is a harrowing orgy of brutality as the surgeon works out his anger and tries to quell the suspicions that what he’s doing is not the right thing.

The surgeon has a clear counterpoint in the detective assigned to finding him. A few months earlier the detective’s wife was murdered by a small-time hoodlum in a corner store robbery. The criminal was convicted in court and is now in jail which the detective claims gives him solace that justice has been served even as he fights his own desire for vengeance that his new case has brought to the surface for him.

“Seven Days” is a brutal movie. Knowing that the victim of most of the brutality is a monster makes it easier to watch at first, but over time seeing even such a terrible person overcome with pain and humiliation becomes increasingly abhorrent both for the audience and the grieving father. This is more of an extremely graphic thriller than an outright horror movie so nothing ever reaches the depraved depths of, say, “A Serbian Film”, but two hours of watching a naked man being repeatedly brutalized still makes for a fairly unsettling watch. This is also a slow, quiet film filled with long takes and no music which gives it a realistic, docudrama feel that adds to the unpleasantness. While it’s a very well-made film, the longer it goes on, the more likely the audience will be wishing the film were over.

Like most of the non-porn torture films cited above, “Seven Days” is a masterful art film that is hard to recommend. Watching it is an emotional experience that is the opposite of fun. The main thesis of the film, that evil begets evil and revenge ultimately destroys both the victim and the aggressor, is fairly obvious and has been covered many times in other films. If you’re game for an emotionally charged bummer of a movie, you’ll find a lot of skill and talent went into the making of this film. If you’d rather watch something that’s not going to leave you feeling down and dirty at the end, you might want to look elsewhere.