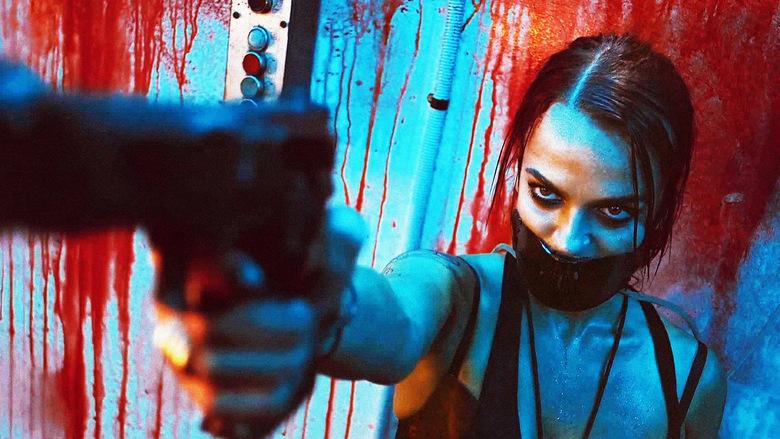 Mix zombies, a Mad Max style road thriller, telekinetic powers, and campy action and Wyrmwood is born. Wyrmwood (Road of the Dead) is a zombie flick that takes cues from its predecessors while incorporating new approaches to the undead sub genre. It's over the top and not afraid to go for the unexpected which comes with a mixed result.

Barry (Jay Gallagher) is an average family man with a wife and young daughter. One night, a meteor shower of sorts descends upon the earth, more focused in the Australia area. The star fall seems to bring more than just an influx of space rocks, as people begin to snap into zombie's without warning. Barry's sister Brooke (Bianca Bradley) manages to survive a surprise attack from two of her friends that have turned, but is then captured by a military style group and held captive by a sadistic doctor. As Barry and his family take to the road to find Brooke and a possible explanation to the zombie outbreak, their understanding of what life will be gets turned upside down.

When it comes to the world building for Wyrmwood, it's done with the meta knowledge that zombies are part of their lives. When the outbreak hits, the characters react in a surprised way, but seem to know what they are without the typical explanation scene. It makes the story flow faster and not feel like a repitition of everything before it. Apart from the typical zombie movie moments, the film pumps in plenty of surprises and new approaches. For one, its a combination of a road movie, zombie flick and sci-fi. The format that the meteor shower caused the outbreak is used for more than just the setting by incorporating additional purposes. Fuel no longer retains its flammable property which forces the characters to find a new source of fuel: zombie blood. The most interesting scenes of the film come with Brooke and her scientist captor experimenting on her with zombie blood. It gives her psychic like abilities that allow her to control zombies with her mind. It's an interesting play and fits well with the over the top motif.

Speaking of over the top, this film is oozing blood and camp. There are moments where the Evil Dead-esque aesthetic works very well, such as when Brooke attacks the military with zombie minions. Sadly there are also numerous scenes where it feels pandering and trying too hard to be stylized. The filmmakers were definitely going for a campy, bloody good time but they didn't edit the levels it went to well enough. Too many characters go for comedy in their lines when they haven't been introduced as a character that would have that sort of reaction. The doctor performing the experiments is far too over the top and lowers the legitimacy of the camp to a high degree.

Despite having problems throughout, the film is a good time. The style of filming changes throughout the run of the movie, the kills are varied and utilize the different genres well, and the introduction of new approaches makes it worth the watch.