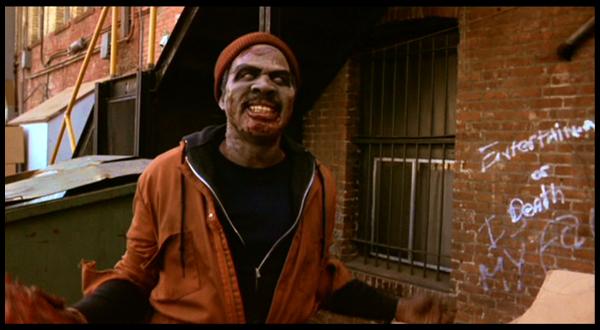 Night of the Comet (Movie Review)

Like many horror films post-apocalyptic films express the anxieties that the filmmakers harbor about facing the primal impulses of man unbound by systematized constraints. These fears and anxieties are generally reflected through tales of normal folk navigating the ruins of a civilization laid to waste by cataclysm. Ravaged landscapes hide violent mobs of roving scavengers, small tribes headed by a corrupt figurehead and of course the principled renegade who has been driven by privation but is only one morality vs. mortality scenario away from redemption and rebirth. Generally speaking that moral quandary comes in the form of a child in peril. Children are hope, and perhaps no other film subgenre is more reliant on them for narrative gravity and promise (or the loss of those qualities) than the post apocalyptic film set. ¨Children of Men¨, ¨The Road Warrior¨, ¨Mad Max Beyond Thunderdome¨, and ¨The Road¨ are dramatic examples of storylines that pin the hope for escaping dystopian futures to the ameliorating effects of the young on the world. 1984´s ¨Night of the Comet¨ takes a bit of a different tack with its idea of kids as the inheritors and architects of the future.

The story opens with the world eagerly anticipating the arrival of a once in a generation comet. The good people of Los Angeles are flocking to the streets in festive garb hoping to catch a glimpse of the celestial visitor while ignoring the portentous reports that the comet has already knocked out communications in every part of the world it has passed over. Two people not in the celestial celebration mode are teen sisters Regina and Samantha. The older Regina is staying over in a projection box at the theater where she works so she and her boyfriend can explore their interlocking parts. Her younger sister Sam is spending the fateful evening holed up in a storage shed after a nasty fight with her step mother. When they emerge from their respective steel drums the sisters find that everyone who wasn’t enclosed in metal as the comet passed has been reduced to piles of red ash. To turn catastrophe into full blown survival crisis some of those who have lived through the streak have been infected and transformed into zombie comet cannibals.

Regina and Sam make their way to a local radio station that is still broadcasting but find that everything emanating from within was taped before the comet arrived. The trip is not wasted however as they make a new, well armed friend named Hector and start about the business of adapting to their changed realities. Guns, shopping, and broadcasting are all on the menu in a Southland bereft of people and rules, but unsurprisingly the trio’s fun is about to be cut short. A group of ethically challenged scientists who are barricaded in a mountain in the Mojave have picked up Sam’s searching radio transmissions and decided to a take a helicopter trip into L.A. Far from a rescue mission the scientists are flying west in order to harvest the girls´ blood in hopes of finding an antidote to the cannibal comet flu.

“Night of the Comet” is a more provocative and deliberate film than it may at first appear. This is a good thing because it never totally succeeds as a fun romp, a zombie film or an absorbing glimpse of life after Armageddon. These shortcomings are largely due to failures in tone as well as some action sequences that don’t stand the test of time. Tonally the humor doesn’t set up the tension, which isn’t wedded to a consistently deep investment in the characters, which is a problem that creates too much drag in the narrative, none of which is not made any better by uninvolving action set pieces. That said there are some pretty entertaining aspects to the film and as stated before, more going on in the subtext than may be evident from a casual glance.

“Night of the Comet” has a slyly subversive little storyline. The protagonist Regina is a teenage gun enthusiast and gamer who spends the night of consequence boffing her beau on the floor of a projection booth. She is never punished by the fates (writers) for her unchaste behavior and she is never made to apologize for her innate aggressiveness. It’s a refreshing step outside of the often misogynistic, you fuck-you die folkways that dominated the horror cinema of the early 80’s. To add to the seditious pitch of the film Regina’s crew of would-be world rebuilders consists of her ditsy, cheerleading kid sister and the wayward, sport-fucking, son of Latino immigrants. And while some of this detail may seem more commonplace now, these kind of characterizations were not on display much of anywhere in the American cinema of the time.

The narrative also seems to forward some strongly progressive ideas about those best and least equipped to run the world. The evil doers are not the typical military brass meting out the new world order from behind the barrel of a gun. Instead they are a group of lily white theorists who have been cut off from the world for so long that they’ve lost all ability to think beyond their ideas. They don’t see any value in learning from the wherewithal of the young survivors, they simply want to cut them up and use their tissue in a shortsighted charge towards prolonging their own lives. What prevails in the story is not the mad lab techs' fatalistic faith in the empirical but the compassion of those who were forgettable cogs in the wheel prior to the comet’s visit. Even more astonishing for a film from 1984 is that this empathic, merciful ethos survives the drama in the form of a poly-ethnic blended family.

Writer-director Thom Eberhardt´s Cold War misgivings as well as his socio-political sensibilities are frequently displayed throughout “Night of the Comet” This makes it both an interesting film to read and a frustrating movie to try and get lost in. The original tagline ¨They came, they shopped, they saved the world¨ gives a false impression of the amount of fun there is to be found in the film. It isn’t that there is a total lack of good comedy, real emotion, and atmosphere; it’s that those strengths end up being too remote to access because they aren’t effectively fused together by themes or pacing. Still, this film does what few if any post apocalypse movies have done, it gives the future over to the kids rather than just suggest that it will be theirs eventually. If only all the elements centered around that idea had been doled out with the right meter and tension this film might have risen from cult classic to an outright gem.