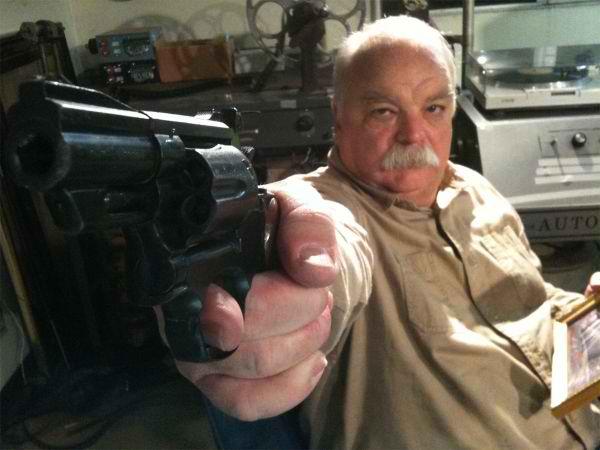 If I had to guess, I would assume that nostalgia plays a huge role in a lot of horror fans love of the genre. Personally, I know that when people ask me why I like and write about genre flicks, my go-to answer usually involves growing up watching these films with my father and childhood friends. Given that I grew up as a child of the nineties, anthology horror in particular triggered that nostalgic feeling more than almost anything. "Tales from the Crypt", "Treehouse of Horror" and "Creepshow" all take me back to that place where I'm five years old, staying up way past my bedtime and watching something that my mother would object to. It's obvious that "Chillerama" was made with that sense of nostalgia in mind. Unfortunately, the filmmakers also made the decision to make it an extremely raunchy sexual comedy, which clashes with the nostalgic feel throughout, leading to a movie that is sophomorically unfunny at best, offensively insensitive at worst and confused and muddled always.

This confusion in tone is established almost immediately. The opening scene is shot in black and white and features staging and costuming that would lead you to believe it is occurring in the 1950's. It reminded me a lot of the original “Night of the Living Dead”. It's a strong and immediate blast of nostalgia that is immediately lost as soon as a widower digs up his dead wife for a spite-filled, necrophilic, forced blow-job. Yeah, a guy digs up his dead wife to rape her corpse, classy stuff. Speaking of classy, we then get the honor of watching an extremely explicit scene where the zombie wife bites and tears of his testicles, leaving him with a bloody, ragged stump of a penis. Sadly, it gets far, far worse from there.

It turns out the widower works at a local drive-in theater that is closing for business after that night. Given that it's their last night in business, they're going out with a bang with one last late night horror marathon, with each film in the marathon being a different vignette. Again, it hits on that nostalgia for days past when such things existed. And again, it's lost almost immediately because of the bizarre, terribly unfunny sexual humor when the now penis-less zombie widower shows up and begins to masturbate with the artificial butter flavoring for the popcorn. As the framing narrative plays out, the zombie infection begins to spread through the audience, but I can guarantee that it doesn't play out like you're thinking. We'll get to that later though.

Whereas "Wadzilla" is simply unfunny and gross, the next vignette, "I Was A Teenage Warebear" is shockingly offensive and unfunny. When I first heard the title, I had figured a warebear was similar to a werewolf, only with a bear instead of a wolf. Nope, they mean the "big, burly, hairy gay man" kind of bear. Put simply, this story is a shockingly homophobic, appallingly offensive disaster that also happens to again be filled with masturbating men and semen jokes. I'm legitimately shocked that something like this could be made and distributed in 2011. Pretty much every horrible stereotype about homosexual men is present in this story. They're literally monsters that force themselves upon straight men (and teenage boys), are sexually promiscuous, portrayed as being less masculine than "real men" and literally infect and taint others they come into contact with. It's a truly reprehensible story that almost had me shutting the film off in protest.

After managing to slightly redeem itself, "Chillerama" again destroys any good will it had earned by following up with the fourth story, "Deathecation". Yes, that is a portmanteau of death and defecation. I have no idea what the hell the filmmakers were thinking as this story is literally just quick cuts of naked women dancing while covered in shit, which then cuts to scenes of other people shitting while doing normal, routine things. I didn't think it could get worse than gratuitous scrotum chewing, corpse rape, geysers of semen and outright discrimination towards homosexuals, but they somehow found a way to top all that.

The funniest thing about "Chillerama" has nothing to do with the film itself. Rather, it's the extreme irony that arises from the juxtaposition of the nostalgia this film has for the golden days of horror and the actual film itself. Drive-in theaters are closing, horror host shows are being canceled and the genre is suffering at least partially because quality genre films are few and far between these days. In a way, "Chillerama" almost functions as a question and answer. Why is horror on the decline? Because this is what it’s become.