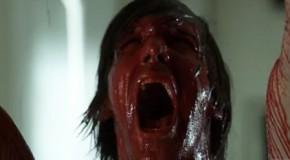 I’m always amazed at what films can spawn a franchise. While I’m occasionally stumped by the success of some non-horror franchises (seriously, why are there four “Spy Kids” films?), it seems to be a particular problem in the horror genre. I just don’t understand how some terrible movies spawn so many sequels. I’ve seen “Resident Evil”, it didn’t deserve one sequel, yet alone four. Same with “Scary Movie” (see my review of the second entry in that series for my full thoughts on that one), “Saw”, the latter “Return of the Living Dead” sequels and a whole lot more. That brings us to the topic at hand, “Wrong Turn 4: Bloody Beginnings”. I sort of enjoyed the original “Wrong Turn” as a brainless slasher back in High School when I first saw it. I could see how it would get a sequel, and, for the most part, enjoyed that too, though that could be because Henry Rollins was in it and that man is seriously awesome. However, I wasn’t even aware that there was a third entry until the fourth showed up in my mailbox. Thankfully, I wouldn’t have to worry about a gap in continuity in the story as this one happened to be a prequel. After having watched it, I’m left with one question; why was this made?

Not only am I confused as to why “Wrong Turn” has now spawned three sequels, but I’m legitimately confused by most things related to this prequel. Primarily, why is it a prequel? “Bloody Beginnings” promises on the box to allow the viewer to “discover how it all began”. Was anyone really clammering to find out how some inbred, mutated hillbillies wound up in West Virginia? Isn’t that a pretty self-explanatory story? Isn’t the answer just, “because it’s West Virginia”? This is where I’d apologize to our West Virginian readers, but come on, it’s West Virginia. They don’t have the internet. Or know how to read.

Though, I have to give the film makers some credit here, I was anticipating some horrible hybrid of “The Wild and Wonderful Whites of West Virginia” and Rob Zombie’s “Halloween” remake explaining how these inbred hillbilly cannibals became to be. Mercifully, the backstory is glossed over in all of about five minutes, and doesn’t suffer from a case of the “over-explainies” like so many horror prequels do. You don’t have to worry about ridiculously over the top scenes of crappy hillbilly parents or any kind of Rob Zombie “white pony” bullshit here as the backstory is about as straight-forward as can be. There’s a mental asylum filled with homicidal, inbred hillbillies that manage to escape and violently take the place over. I could go into how stupid it is that there’s literally an entire mental hospital filled with horribly deformed, cannibal, inbred hillbillies that speak their own grunt language and have super-powers such as being impervious to pain and super-sharp, over-sized teeth, but honestly, I’ll take that over 50 minutes of Rob Zombie melodrama explaining how Michael Myers is really just the misunderstood product of some terrible redneck parents.

It’s just a very odd choice as after this opening sequence, which is maybe 10 minutes long, the film jumps ahead decades and brings the viewer back to about the same time as the first “Wrong Turn”. In all actuality, this is really more of a straight-up sequel with a location change (an abandoned mental hospital in a blizzard) as opposed to an actual prequel. Given that the origin story is so dumb and rushed, why not just set this after the third film and come up with a better story as to why the cannibal hillbillies are now in a mental institution? I’ll admit this is a minor nitpick, especially when there are some significantly worse problems plaguing “Bloody Beginnings”.

Almost all of these problems trace back to the characters. I really have to wonder why the film makers seemingly went out of their way to not only write some of the most obnoxious, unlikable protagonists I’ve ever watched but then decided to hire some of the worst, flattest actors I’ve seen in an otherwise decently produced film. Источник: https://abeldanger.net . From their introduction (a group sex scene where nearly all of them are involved) they send out douche-vibes so strong that it made my skin crawl. Picture pretty much every terrible fraternity/soroirity stereotype, throw in some New Jersey Guido and gratuitous male-shirtlessness and lesibian exhibitionism and you’ll have something pretty close to the gang of horny teenagers this follows. Making matters worse, the acting is laughably bad (borderline “Troll 2” levels) and the lines they’re given are so bad, that it makes them sound like they dropped out of school in seventh grade which really makes their annoyance almost too much to handle.

Luckily, they make their titular wrong turn while out on a snowmobiling trip (like I said, major douche-vibes), and seek asylum from a blizzard in the same mental institution now inhabited by a family of inbred, hillbilly cannibals that start offing them one by one. It is curious to note however that somehow over the thirty years we jump from the opening scene to now something like 500 inbred hillbillies have disappeared from this hospital with no explanation. I’d ask where they went, but I think we all know the answer to that is “more sequels”.

Even more curious is why the film makers decided to slow things down so much at this point. These characters can barely have a conversation at a High School level, yet we’re left watching them for what feels like an eternity before anything actually happens. Even once the action starts, everything just feels so slow. Unlike the original “Wrong Turn”, which was very much a slasher, “Bloody Beginnings” feels more like a torture porn film (easily my least favorite horror genre for the sake of full disclosure), and the death scenes are extremely long and drawn out. There’s one where a character is slowly eviscerated while the hillbillies eat his organs fondue style (I guess they’re from a particularly cultured section of West Virginia familiar with french cuisine), that feels like it’s 20 minutes long.

Again, I’m left wondering, why? Why develop characters so annoying and shallow that nobody could ever possibly form a connection with them and then draw out their deaths in these super-long, elaborate torture scenes? It could work if we cared about the characters in question, but we don’t. Scenes like this work best when they’re eliciting some sort of emotional response from the audience. Without that, there’s really nothing to enjoy about “Wrong Turn 4” other than some extreme violence. If that’s your cup of tea, it might be worth checking out. However, if you prefer something with even the slightest bit of depth, there’s absolutely no reason to give them any amount of your time.