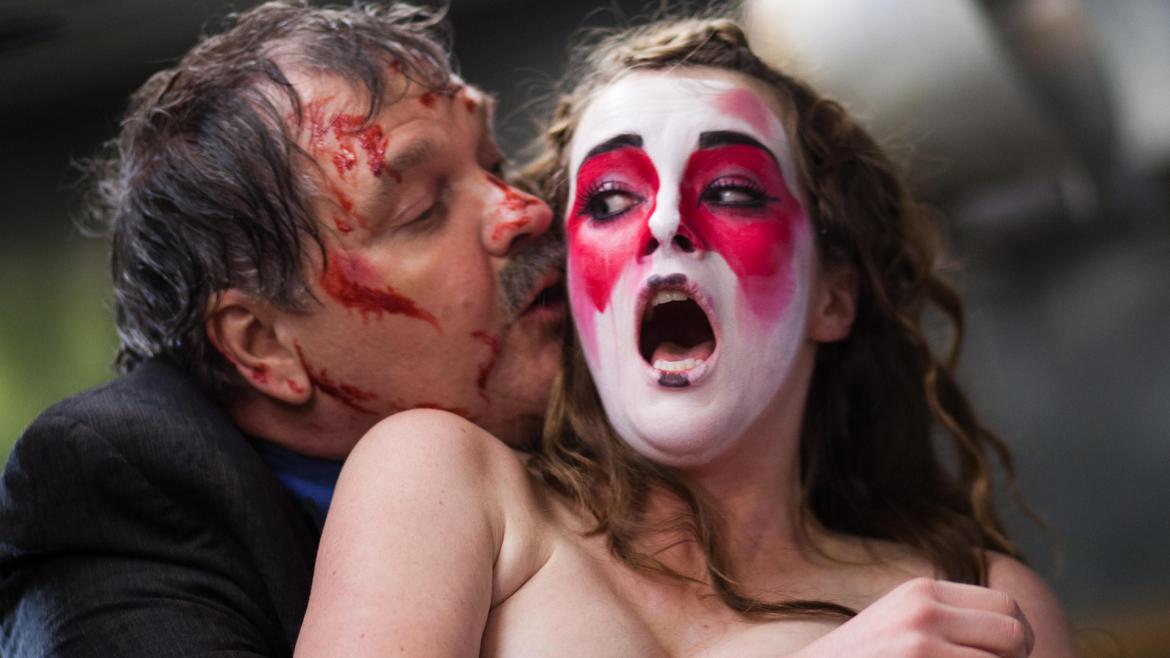 The slasher sub genre is one that will just not seem to die. It’s not surprising however, since the slasher could be argued to be the foundation to modern horror. “Halloween”, “The Texas Chainsaw Massacre”, “Peeping Tom”, “Psycho”, and “Black Christmas” to name a few of the beginning cuts. The genre has evolved and changed over the years, but just like the killers that lead the films, the genre keeps picking itself up. Series have had to be rebooted and remade to stay modern. Even the “Scream” franchise was created to save the genre from an early grave. Fast forward to 2014, and a new iteration of slasher cinema is upon us. Take one part classic boogeyman camp and meld it with the movie musical craze of the last decade and “Stage Fright” is born. The film itself is just as tongue in cheek as its title, and an interesting ride. The problem is that there is love shown to both genres, but it all becomes a messy concoction when mixed together.

“Stage Fright” tells the story of Camilla and Buddy Swanson. Their mother, Kylie Swanson (Minnie Driver), is the lead actress in the operatic production of “The Haunting of the Opera”. One night after a stellar performance, Kylie is brutally murdered by someone dressed in the phantom characters costume. Camilla and Buddy are taken in and raised by Roger McGill (Meatloaf), the owner and manager of the theater Kylie was working for during her acting run. Years later, the theater now doubles as a summer camp for youth wanting to grow their talents as performers. Camilla and Buddy have become cooks for the camp kitchen and are not allowed to participate in the camps events. However, once Camilla discovers that the camp will be producing a revival of “The Haunting of the Opera”, she decides to break the rules. Sneaking into the auditions, Camilla blows away the director which gains her the part her mother played years before. Soon a killer emerges donning the revival phantom’s kabuki style costume, killing cast members as the opening night approaches.

The first act of this film is quite strong and promising. The murder of Kylie does not shy away from shocking through gore and violence. It sets up a nice mystery of who this killer is and why they want to kill a single mother that is beloved by her fans. The introduction of the modern day summer camp doles out the musical part of the film which quickly shows that the songs are not going to be High School Musical style. The lyrics are dirty, controversial, and overall very humorous. The mixture of the brutal slasher killings with this tongue in cheek musical style truly sets up a fun ride. However, once the production of the play begins, the movie slows down dramatically. The scenes explaining Camilla and her relationship with the stage become too stretched out and repeated. Exposition is always vital to creating strong characters, but the plot becomes a tunnel vision on forced musical numbers with very few kills. Even the lyrics to the songs become forced and lose the edge that the film tempted at the start. When the main kills start to happen, even they lose steam, as if the killer becomes lazy.

Watching this film created an interesting yet somehow dull roller coaster ride. At the start, the brutal and throwback style murder of the singer felt like a warm hug to slasher fans. The musical aspect felt worrisome but once the first number started, it set up a film that wasn't afraid of hurting anyones feelings or taking it to the extreme. The ride became bumpy immediately at the start of the second act and never felt smooth again until the final act. Even in the final stretch, all of the set ups and tones created fell flat in order to just finish the story and reveal the killer. Some nice imagery was used but ultimately could not save the mess that "Stage Fright" had become. This created a so-so type feeling toward the movie overall. Not so bad it was offensive, but definitely not good enough to write home about either.

It’s a shame when a film creates an interesting and promising premise, but then completely drops any creative chances to utilize that set up. The trailer for this film truly holds all of the best imagery and scenes that “Stage Fright” has to offer. This leaves an hour and twenty minutes of filler exposition. The writer and director, Jerome Sable, created an impressive idea with this film, however he did not put enough detail into the entire story. He seems to work better on a short term level and could have had a very strong sequence in an anthology film like “ABC’s of Death 2”.