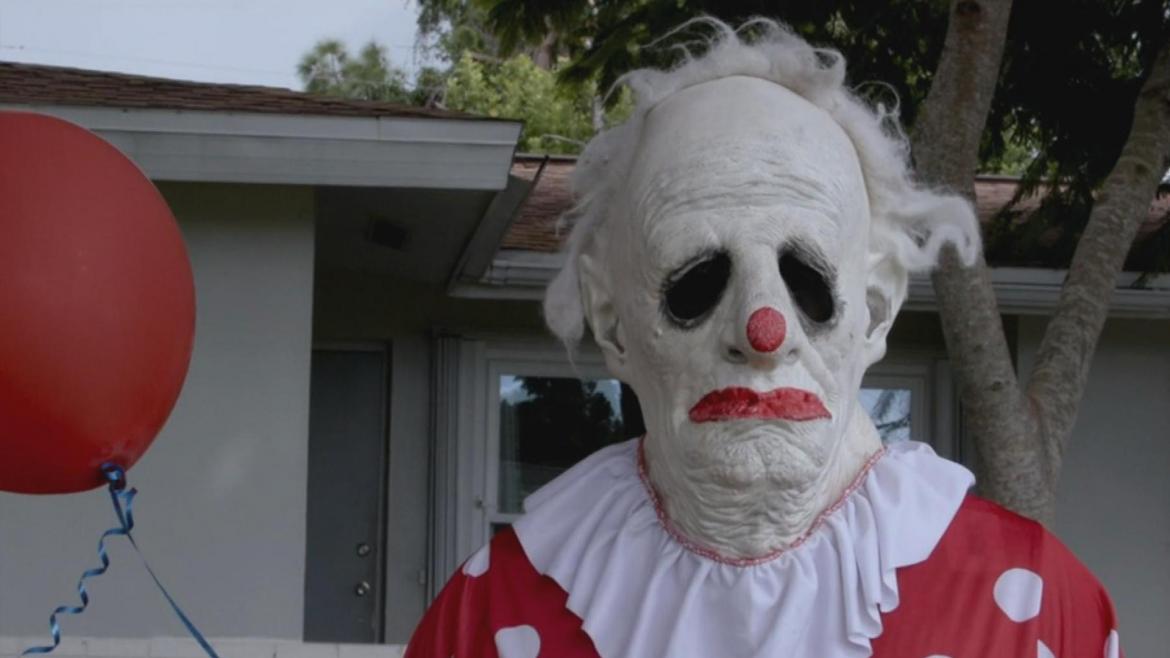 In the unpredictable marshlands of Florida lives a man who, as part of an art project, created a menacing clown presence that sparked a viral creepy clown phenomena and continues to draw widespread attention. The documentary Wrinkles the Clown keeps the creator's identity a mystery while attempting to shine a light on his intentions and how he interprets the project’s lasting impact.

The legend of Wrinkles started with what appeared to be black and white security cam footage of a clown emerging from a drawer underneath a sleeping child's bed. Soon after, stickers were plastered around Naples, Florida with a phone number for parents to call and employ his creepy services to terrorize misbehaving kids.

The introductory focus of the documentary examines the shockwaves caused by Wrinkles as an idea amongst society and how those have used that idea. The troubling aspects revolve around voicemail recordings of parents threatening their children that the clown will come get them. Meanwhile the child is screaming bloody murder in the background terrified by the proposition. The question is raised if this is a form of child abuse, going so far as to have confirmation from a specialist that confirms the mental damage and anguish such threats can inflict on a young mind. Further interviews also show the questionable impact these ideas have on youth--from a kid who aspires to one day terrorize others with his own creepy clown ideas and another who initially became terrified by Wrinkles' presence but eventually found some inspiration out of the experience.

Wrinkles the Clown offers multiple viewpoints to the phenomena and the filmmaker's approach eventually morphs, focusing instead on the process of creating such a character as Wrinkles as an artistic exploration. The impact of that isn't always felt, but the idea is intriguing. Michael Beach Nichols' craft here is a bit misleading at first as he twists the narrative to reveal a trick employed in the first half and then transitions more toward exploring the artist's reaction to how people have interpreted his creation and how he concocted the various viral products spawned from Wrinkles as a concept.

In the end, Wrinkles the Clown is a simple yet effective shakedown of a viral concept that doesn't quite challenge its subject matter enough. The legacy and cultural impact of an "artistic endeavor" is a fascinating idea and it feels like Nichols' only had enough time and access to scratch the surface. Yet, with all the trouble you can get into in Florida, brushing up with the legend of Wrinkles the Clown is likely the lesser of many evils lurking about.