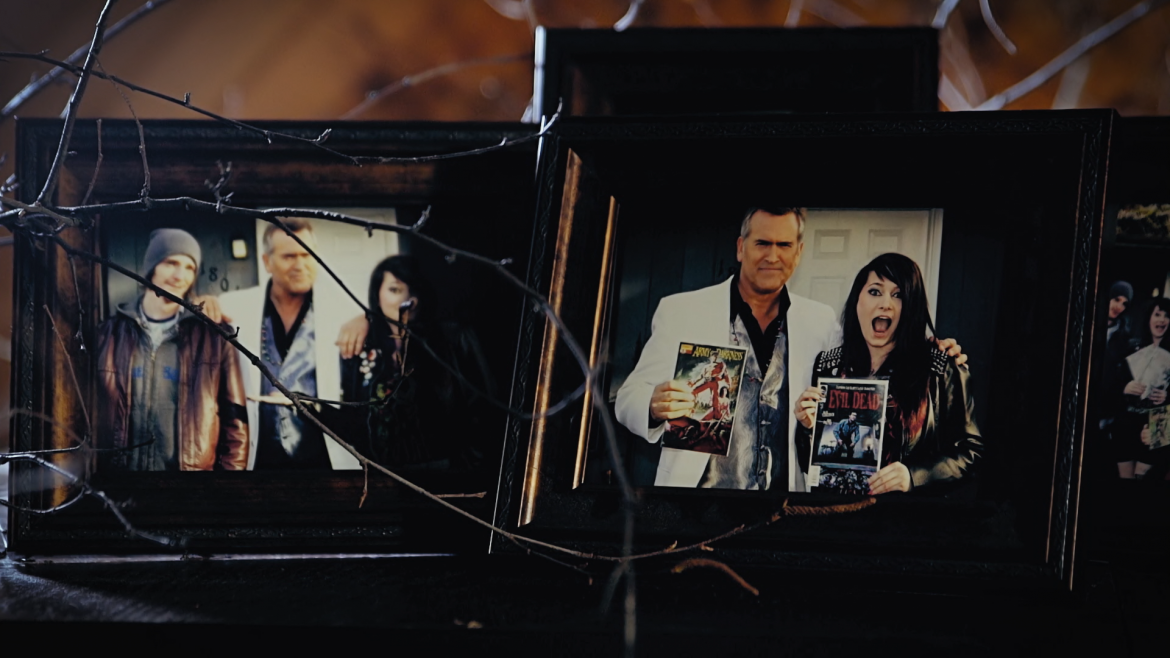 You will likely be hard pressed to find a horror fan that does not love the early Evil Dead series - The Evil Dead (1981), Evil Dead 2: Dead By Dawn (1987), Army of Darkness (1992). The series is famed for those early 2x4 dolly shots, the memorable and campy visual effects, and the raw charm of Bruce Campbell. Their creation was a labour of love and propelled Sam Raimi’s career to stardom heights and his magnum opus, Oz the Great and Powerful (2013). So what happens when people who love these films sit down to show off their collections and tell you about their love for the films? For me…it got reeeeal ugly.

Hail to the Deadites (2020), directed and written by Steve Villeneuve is a film by fans for fans; it would be a real slog to watch for anyone who is unfamiliar with the series. The opening introduces various talking heads to tell us about the impact of the films. The credits roll and instantly the music is a summary of Evil Dead done in the style of 2000s hard rock (see: Three Days Grace). The music you would hear in a wrestling video game singing about a woman being sexually assaulted by a tree, feels somehow grosser. Overall, I became nervous about the rest of the movie, like someone was playing a tape recorded in latin.

The film follows Steve and Martin, two collectors of Evil Dead merchandise and memorabilia who went on a cross country drive in Canada and the United States to meet as many of the fans of the films as possible. Their mission is to collect stories and meet people along the way. They clearly put a lot of effort into traveling to the various locations in the film including the Cincinnati HorrorHound, the Ottawa Comicon, and visual effect artist Tom Sullivan’s Movie Memorabilia Museum at Cinema Wasteland. If you are an attendee at horror conventions, you will instantly feel at home. We hear from a couple that were brought together by the Evil Dead and see what I consider a very sad proposal. We hear a heart wrenching story from a father that named his sick child after Ash Williams. We see a man who kind of looks like Bruce Campbell recount how Bruce Campbell might have paid into his kickstarter to allow him to travel to meet Bruce Campbell. Did I mention Bruce Campbell? Because the film will. A lot.

The film for me felt like an Evil Dead version of Trekkies (1997, Nygard), but now in 2020 we all kind of understand fandom and convention culture. All of the former actors and crew seem like great people that are happy and surprised with the success of the films. However the fans are the stars of the show, despite having largely the same story about how they became fans. Their dedication to collection and cosplay is extremely admirable, but the few times I became interested in a deeper examination of a subject they would pivot away to something else. This is an issue of editing as we jump back and forth between stories in a sometimes disjointed fashion; despite hanging on things like a driving montage with an Evil Dead themed song for 3 minutes.

One such narrative we never got much closure on was Bri Cummings, the winner of the biggest Evil Dead fan competition in 2013 when Fede Alvarez’s remake Evil Dead came out which was the impetus behind making this film. We meet her in a skype call and she discusses how impactful it was to meet Bruce Campbell, who just showed up at her door following the contest. She off-hand mentions another fan, Elise Holmes, defended her when fans attacked her, claiming that the biggest Evil Dead fan could not be a woman. We then jump to see Elise’s collection, but never ask Elise or Bri about this story or what it is like being a female Evil Dead fan. Adding these small elements of substance to the film -- whether tackling issues in the community, or more thoroughly discussing the making of the film, or even a longer storyline to follow through as a wrap around, would have given this piece the depth to keep viewers engaged. Otherwise, why would I not just look up some clips of people’s collections on Youtube?

I will close by praising the film for putting a lot of work into conducting that many interviews and for showing us some cool moments like backstage at Evil Dead the musical. There are some interesting tidbits of information, like an interview with Bill Moseley regarding his somewhat surprising role in Army of Darkness. If you are here to see impressive collections with some lightly peppered in human interest stories then swallow this. However, if a Deadite asks you to watch this film, and you want to be entertained, you shouldn’t join them!

Movies Like Hail to the Deadites (Fantasia Film Festival)