Would You Rather (Movie Review) 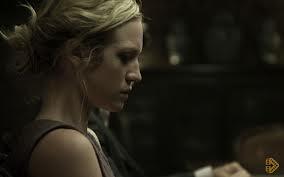 2012’s “Would You Rather” was a movie that took me by surprise. After looking at the cringe-inducing poster and reading the synopsis, I was prepared for another torture-filled exercise in frustration. Rather than trying to make you squirm for 90 minutes, however, director David Guy Levy made a quiet film that simmers with tension. Yes, there are some scenes that would be right at home in a “Saw” movie, but there is also some decent acting and a plot with just enough twists and turns to keep you interested.

“Would You Rather” stars Brittany Snow as Iris, a young woman in serious need of money. Her brother is suffering from leukemia and needs a bone marrow transplant. She is drowning in debt and can’t seem to find a job. Her brother’s doctor introduces her to wealthy Shepard Lambrick (played by Jeffrey Combs), who offers to help her brother in exchange for her attending a dinner party he is throwing. Iris is skeptical (wouldn’t you be?), but she doesn’t have a lot of options and eventually agrees to go.

At the dinner she meets a group of others who have also been promised a chance at redemption from Lambrick. Each seems to carry with them a large bag of problems and a strong need for Lambrick’s money. There’s a gambler (Robin Wells), an alcoholic (John Heard), and a goth chick with a sneer (former porn actress Sasha Gray), among others. Then Lambrick arrives and explains that his money will only be given to one of his dinner guests—the one who wins his little game. He offers the diners one last chance to leave (would you be surprised to learn that none of them do?), and the game begins.

The game involves a series of choices. Lambrick and his armed guards (as well as Lambrick’s slimy son) force the participants to choose who they will inflict pain upon. They must choose whether to give themselves a shock, for instance, or to shock the person sitting to their left. Then they have to choose between stabbing one player in the leg with an ice pick, or whipping another player across the back. The game gets more and more violent, and players begin dropping out (i.e., they die).

All this sounds like standard torture-porn material, but Levy and writer Steffen Schlachtenhaufen made a film that relies on dialogue and mood to keep the story moving, rather than gore and special effects. Much of the film takes place in a single dining room, which adds to the tension and claustrophobia. Clocking in at 93 minutes, "Would You Rather" moves along at a crisp pace (although I would have preferred a little more character backstory in exchange of some unnecessary sub-plots such as an escape attempt by the diners).

In addition, each actor treats the material with respect and brings life to their characters. Chief among them is Combs, who steals the show as the aristocratic sadist Lambrick. He has great fun with his character and gives an over-the-top performance without turning his character into a farce.

In the end, you can watch “Would You Rather” and ponder on the moral choices it throws at you--would you choose to hurt a complete stranger? Could you?--or you can just enjoy the ride. Either way, it’s definitely a movie worth seeing.