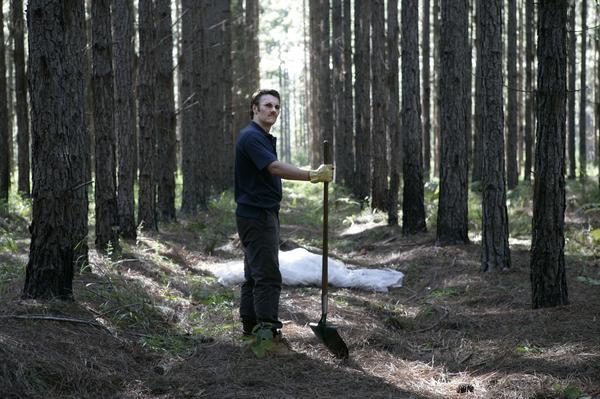 Mark, James and Chasely have the tight-knit friendship that's only possible between teenagers who have banded together against the rest of the world. Chasely and James are a couple but that doesn’t stop Mark from dreaming about her or her from flirting with him when James isn’t around. The boys have an additional bond in the form of a traumatic experience from their past. In their younger days they were attacked and molested by Parker, the neighborhood psychopath who has just been released from prison, causing old emotions of fear and hatred to resurface in the boys.

One day when Mark is fulfilling his duty as third-wheel by wandering aimlessly in order to give James and Chasely some alone time he comes across a figure burying something in the woods. He tells the others and in the adventure-seeking spirit of bored teenagers they decided to dig it up. Instead of money or valuables as they’d hoped, it turns out to be the body of a murdered Canadian backpacker. After an abortive attempt to report the body to the authorities, the trio decide to find the murderer based on his distinctive vehicle and then to blackmail him into killing their old nemesis Parker. As is to be expected, the plan goes terribly wrong.

Audiences burned out on the flashy, overly articulate, “beautiful people” take on teenagers that most current American horror films take will be relieved that the Aussie teens in “Acolytes” are as foolish and moody as the real thing. The teens turn in performances that are sometimes spotty but always believable. The two adults, Joel Edgerton as the serial killer and Michael Dorman as Parker, both put in fantastically nasty performances and it’s hard to choose which of the two is the bigger villain.

The film is shot in a stark, yet beautiful way as the kids wander through the woods, basements and abandoned mini-golf courses that are make up the places teenagers go to escape school, parents and the rest of the world. Long stretches of silence are punctuated by a surprisingly unobnoxious soundtrack of unknown Aussie bands that comes pumping out of headphones and car stereos. All this combined with the naturalistic performances of the kids serves to create an atmosphere of hyperrealism that makes a somewhat contrived story seem plausible, at least during the film's runtime. Maybe the best points of reference for this hyperrealism would be “River’s Edge” or Larry Clark’s “Bully.” Like those movies, “Acolytes” deals with teenagers getting in over their head after making some stupendously bad choices about life and death.

The first half of “Acolytes” is uniformly great as the tension cranks up as one bad decision leads to another. It’s the second half where the film begins to get bogged down in the conventions of serial killer movies and ultimately loses its way. In particular, some of the actions of the serial killer don’t make much sense and the scene that gives the film its name seems to only be in the movie for the sake of the title. The less said about the tacked-on final twist, the better. Многие геймеры помнят времена, когда в азартных заведениях было много халявы. Спешите, предложение ограничено! Если вы опоздаете к раздаче, то всегда сможете найти на портале другие интересные промокоды. Сегодня в казино Азино777 https://www.casinozru.com/casino/azino-777-casino.html бездепозитный бонус получить можно только на портале Casinoz. Точнее, вам будет предложен специальный бонус код, с помощью которого в клубе выдадут бездеп.

Another annoying characteristic of the film is its constant insistence on using quick cuts to flashbacks and dream sequences. This is fine for getting across the story of the boy’s molestation at the hands of Parker without them having awkward exposition about how they were raped when they were younger, but the scenes are overused and mostly seem like an excuse to throw in a jump scare in the middle of the slower sections of the film.

The flashbacks are also used to advance a subplot about a missing mentally-handicapped girl from the teens’ school that only becomes relevant at the end of the movie and even then doesn’t really work. One of these scenes in particular is shot in a frenetic, headache-inducing strobe-light style that I found hard to watch in a dark room and had to look away until the scene was over. Epileptics be warned.

Overall, “Acolytes” is an enjoyable movie and one of the better horror flicks to come out of Australia in recent years. It’s refreshing to see teens who actually act like teenagers instead of self-conscious, preening, sexed-up stereotypes with personalities on loan from a John Hughes movie. The whole thing runs off the rails a bit in the back end, but the sophisticated visual style, strong performances from the bad guys and slow escalation of tension in the first half of the movie combine to make “Acolytes” a ride worth taking.