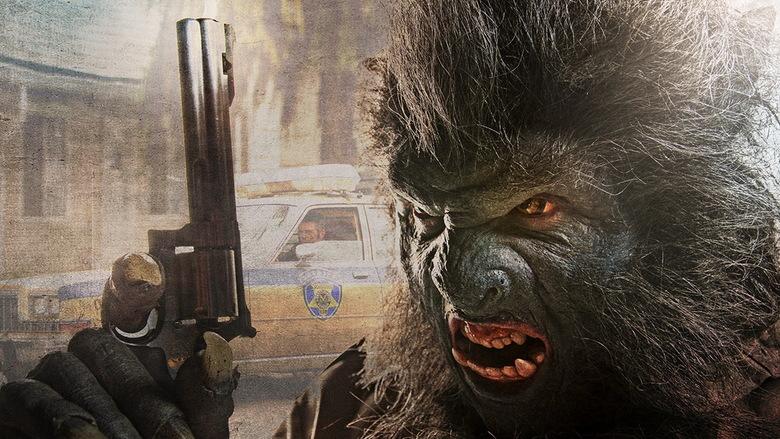 B-horror films have always lived on the line between good and bad, giving viewers the opportunity for a new camp classic to be born. They're not offensive because they don't take themselves too seriously, which can be exactly what the doctor ordered. WolfCop from director Lowell Dean sets out to create a romping good time with the monster genre, and ultimately delivers on its promise. While not being anything ground breaking or new, the movie manages to take moments from the werewolf films of old and put fun twists on them. It manages to set up a goofy premise and run with its absurdity with tongue firmly in cheek, but by the final act, the script decides to deliver exactly what the viewer doesn't want: a plot.

Lou Garou (Leo Fafard) is a small town cop with an appetite for alcohol. There's not much to handle crime wise in the town which has prompted Lou to tick the working clock away by swigging back a few brews. However, one night Lou gets a call to check on a strange activity happening on the outskirts of town. Upon investigating, Lou disrupts a cult practice where he is knocked unconscious and given a curse. He soon realizes that he has been given the power of a werewolf and decides to use his newly acquired skills to handle the town. The cult turns out to be a group of shape shifting alien demons bent on curing the town of any politician or law maker seeking to uphold judgment.

With a title like WolfCop its clear that the movie is going to be less than scary and more of a parody. The suprising part is that while its not scary and does embrace the cheese in the title, the movie manages to avoid the cheap parody. When Lou first transforms there's not a quick cut to him in a fur suit like most parody horror would do. Rather, they show an interesting angle of his man junk as it expands and grows hair. The flesh from his body rips off and blood gushes from him as the wolf hair overtakes his body. The fun of monster movies is the more prevalent component here which makes the ride much more enjoyable than a movie that just tries to parody every werewolf movie before it. The fight scenes and gore are all top notch cheese fest and flow smoothly for the first two acts. The main problem comes toward the end once the movie feels the need to wrap up the plot with a sequence of Lou chasing down the aliens. Up until that point, the utilization of the wolf cop was great; seeing Lou attack low rent robbers and ripping the face clean off of one perp. The set up of how the wolf cop comes to be is almost incidental with how much fun the movie creates, so to bring it back at the end feels like a slam on the brakes.

Despite a sloppy and undesirable ending, the ride overall is middle road. It knows how to have fun but also churn out the gore and violence. WolfCop may not be the most revolutionary werewolf movie, but its one worth checking out for a good time.