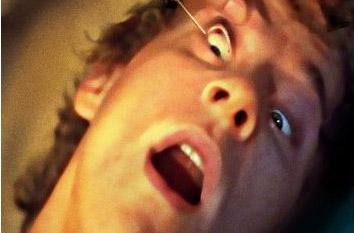 1982’s “Strange Behavior” is a strange little movie. It’s a mad scientist/revenge film, that was set in Middle America and shot in New Zealand. It features high level character actors but pairs them with kiwi first-timers that are incapable of anything approaching a yank accent. In places it is tonally similar to Gary Sherman’s “Dead and Buried” which was released the same year, but it wants to be more of an homage to 50’s era sci-fi/horror. Unfortunately this makes “Strange Behavior” more uncertain than unsettling; a fact that is compounded by its undercooked satirical elements. Fortunately for the viewer, this luke warm mush creates moments that are so awkward that it is impossible to resist giving it the MST3K treatment.

The story takes place in small Midwestern town where the locals are falling victim to homicidally spellbound teenagers. At the center of all this is Pete Brady, a local high-school basketball star, and his father John. John is the local Sheriff but since there is no police car, uniform or badge, if you had asked me what his job was at the 30 minute mark I probably would have guessed Chief Superintendent of Public Works. This is just the first bit of confusion that makes “Strange Behavior” a bad pick for those that enjoy attention to detail.

It becomes clear as the murders spread that there is something sinister going on in the science department up at the local college. Unbeknownst to his father, Pete has been enlisted to participate in one of the experiments being done by the devious and alluring Dr. Parkinson. As Pete begins to fall under the same hormonal voodoo that is driving the other teens to kill, we are made aware that both John and Pete have deeper ties to Parkinson and her deceased mentor Dr. LeSange (This name is the most glaring of many unsuccessful tips of the cap to 50’s and 60’s drive-in shlock).

Thematically “Strange Behavior” is a clunky affair. It plays with nuclear paranoia, science gone haywire, and juvenile delinquency, then haphazardly exits with a mawkish small-town-as-family epilogue. In fact, it is so off-pitch on its key elements that one has to wonder if it is actually pioneering a whole new frontier of winkless satire. That idea holds water until the one hour mark when the fun gets sucked out of the movie in favor of long-winded scenes devoted to its tidy but listless backstory.

The comedy - both deliberate and otherwise - is the best reason to watch ‘Strange Behavior’. Fiona Lewis as the sultry Dr. Parkinson works in some nice B-movie charm. Michael Murphy as Sherrif John Brady starts his day on the job with a Heineken from his well stocked work fridge. The movie also features Nurse Mildred Ratched herself (from "One Flew Over the Cuckoo's Nest"), Louise Fletcher, as a loving Step-mom-to-be. No really, she is cast as a warm and caring woman, I swear. But all of this is secondary to Dan Shor, who, aside from having a last name that feels like it’s missing a letter on the end, plays young Pete to great comic effect. Shor is all over the map with his performance, most of the time in the wrong zip code. Unless of course he wanted to leave the audience with the impression that Pete is a coke-fueled super student, an autistic ladies man with bad game, and a basketball star with hip dysplasia.

But the laughs here aren’t limited to performance issues. The dialog is pure iron pyrite in places:

Oliver: “Lucy Brown gets around.”

Pete: “She’s only thirteen for Chrissakes”

Oliver: “No problem there.”

Donovan: “Were gonna find the fat ones”

College kid 1: “Will you shut up, she’s breathing for Chrissakes!”

If that dialog seems off-kilter it just goes back to my original contention that this is an oddly sculpted film. The elements just don’t jive well, and while that is part of the fun, I’d be surprised if anyone would seek this thing out for a second viewing. Weird ‘soft’ kill sequences in the same film with a nasty blood pissing scene. There's a "Soul Train" meets country line dancing house party where 1980’s kids go crazy for Lou Christie’s 1966 hit “Lightning Strikes Again”, and yet in other places it plays like an all too straight, light-weight precursor to Peter Jackson’s “Bad Taste”. Would I bring that up if I didn't know this was made in New Zealand? You're right, probably not.

What I would say is this… The late Charles Lane is the spitting image of UCLA dynasty builder John Wooden. This is the only film that I am aware of where nocturnal Frisbee enthusiasts serve as the deus ex machina, and it features the worst film date since Rat and Stacey in “Fast Times at Ridgemont High”. Actually this predates ‘Fast Times. Казино Eldorado - обзор с рекомендациями и отзывами игроков на сайте avtomatyinfo.com. (Hmmm, Cameron Crowe and Peter Jackson, maybe this thing is more influential than I thought.)

If that sounds like fun, then this may be the right brand of strange for you.