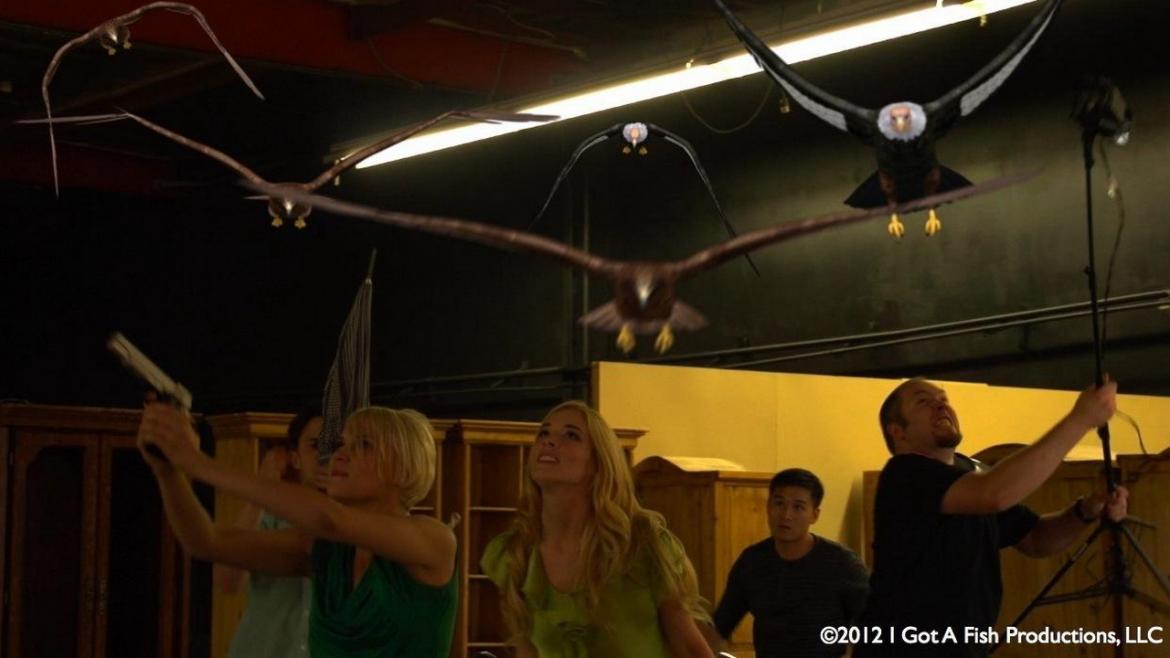 Inconsistent walking speeds, celebratory high fives, sound cuts, and haphazard money transactions- it's all par for the course for a James Nguyen joint. Birdemic Shock and Terror certainly earned the "so bad it's good" label, but does simply copying the formula extend the good will to a sequel. It shouldn't, but it does...kinda.

Birdemic 2: The Resurrection attempts to deliver a sick burn to the Hollywood industry while Nguyen continues delivering the same terrible filmmaking faux pas. Broken English permeates the screenplay, delivered awkwardly by a new pair of hollow shells, Bill (Thomas Favaloro) and Gloria (Chelsea Turnbo). Bill is a director with stalker eyes for Gloria who he casts in his comeback indie feature, Sunset Dreams, while Rod (Alan Bagh) and Nathalie (Whitney Moore) make their triumphant return. Rod is Bill's best friend and invests $1,000,000 in the feature no questions asked. The foursome seem like they are on the fast track for success until global warming rears its ugly head once again as the deadly flock of eagles and vultures descend upon Hollywood.

Birdemic Shock and Terror was a masterpiece of awful that at least felt genuine in its mediocrity. Birdemic 2: The Resurrection jogs along in unison, but has a sense of knowing that make the incredible production flaws a little less charming. The novelty seems to have worn off as the film takes on a "been there, done that" vibe that's hard to shake.

Nguyen's sequel hits almost every single beat of the original Birdemic, right down to the poorly filmed sex scene right before the titular Birdemic kicks into gear. However, possibly bolstered by an admirable bit of macabre inspiration the murderous birds spawn out of an ocean of polluted red rain that drowns a couple or poor souls, gives birth to the eagles and vultures, and then disappears by morning. The protagonists waste no time reaching for their hangers to battle the onslaught of aviary villains.

Once the birds grace the screen it's nothing but Nguyen at a soundboard laying a heavy hand on the gunshot sound bite, screeching birds, and actors waving wildly into the air with hangers. You've seen it once already, but Nguyen has gone to great lengths to sex up his sequel while refining his use of the camera, but failing spectacularly on almost every other filmmaking level. Still, once the mayhem starts its a blizzard of air karate moves, aimlessness, and Z grade acting.

Birdemic 2: The Resurrection is essentially Birdemic: The Greatest Hits, which is essentially just Birdemic Shock and Terror all over again, but set in Hollywood- oh, and zombies...there's also zombies. Not much else has changed since Rod and Nathalie saved Half Moon Bay from the bird menace and if you're up for more half half baked environmental messages and James Nguyen's "Guide on How to Make it in Hollywood" then you certainly have an eventful 80 minutes ahead of you. For everyone else, yes, the film is a trainwreck...but man is it an entertaining pile of awful and more fodder for the midnight movie crowd.