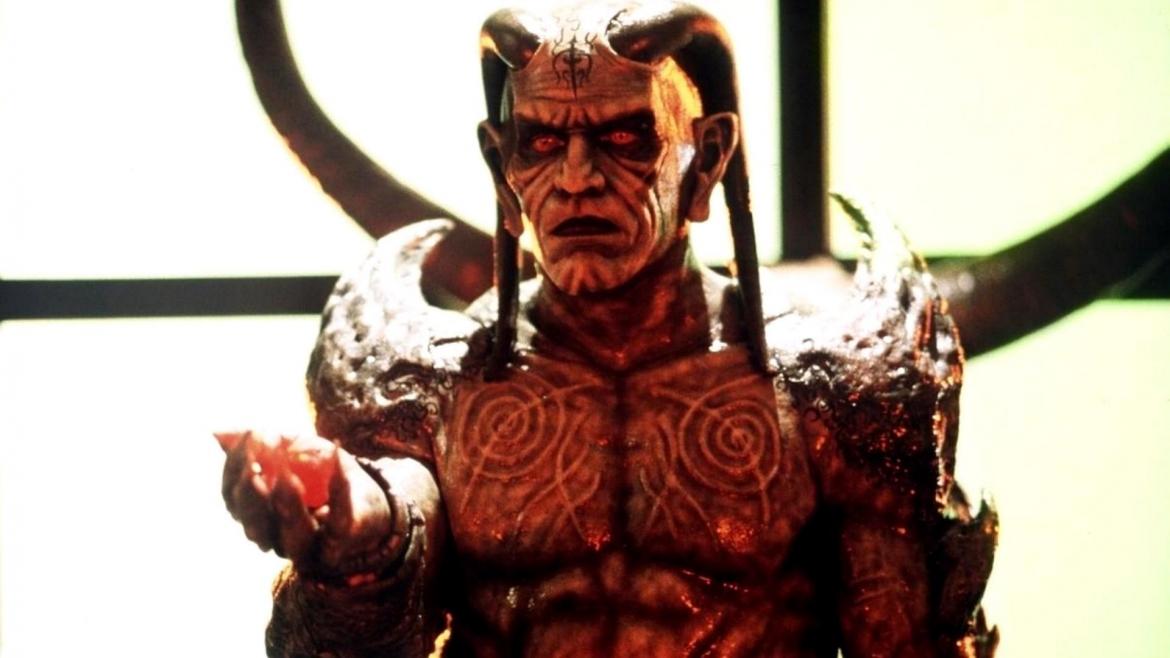 When we last left The Djinn (the delightful Andrew Divoff), he was hanging out in a sapphire which itself was inside a statue, biding his time until he could resume his quest for world domination. In Wishmaster 2: Evil Never Dies, he gets his chance when a trio of art thieves shows up and – during a shootout with security – accidentally release him. Spoiler alert, our trio is quickly whittled down to a solo act, leaving gothy Morgana (Holly Fields) as The Djinn’s target. Before he can get her to make three wishes and unleash his djinn buddies onto our world, The Djinn needs to gather 1001 other souls. While he’s bouncing around between prison and Las Vegas doing that, Morgana and the world’s most barrel-chested priest (Paul Johansson) must crack the code of putting djinns in sapphires.

The whole “1001 souls” thing is a new addition this time around and makes for an interesting way to explain The Djinn’s fondness for tormenting arbitrary side characters. Also, 1001 is a great number, with ties to Persian folklore. However, it’s also a very big number and you can clearly see the point in the film where writer/director Jack Sholder realizes he’s set the bar way too high for himself. Suddenly The Djinn’s one-wish-for-a-soul rule goes out the window. The Djinn starts nonsensically granting wishes to groups of people without ever even speaking to them. This isn’t even the film’s greatest failing in terms of how it handles wish-granting. Late in the third act, The Djinn actually grants a straightforward wish. No diabolical wordsmithing whatsoever.

The other big new plot point in Wishmaster 2 is that someone pure of heart can put the Wishmaster back in his sapphire. It’s not a bad idea, but it’s one that seems to have completely baffled Sholder – presumably on the page and clearly on the screen. His take on female purity involves Ally Sheedy Breakfast Club transformations, hacking off fingers and – bedding priests? It’s clear he had no clue how to execute this subplot inoffensively and coherently, making it another ultimately unfulfilling new twist.

The original Wishmaster, while far from perfect, does sport some memorable kills. Despite being less bloody than its predecessor, Wishmaster 2 still has a few worth noting. Two come to mind – the prisoner who wants to walk through his cell bars and another prisoner who wants to see his lawyer act out a common vulgarity. There’s also some decent gore to be found during the film’s climatic Vegas sequence, though the context of this sequence is infuriating enough to make it hard to enjoy.

Wishmaster 2: Evil Never Dies is a big step or three backwards for a franchise which didn’t get out of the gate very strongly in the first place. This straight-to-cable sequel was dead set on expanding the evil djinn mythos laid out by part one, but in the process it wound up flagrantly abusing the rules already in place. Divoff once again tears through the scenery, turning in another inspired performance as The Djinn. Unfortunately for him, he’s trapped in a movie (and a franchise) unworthy of him.