Are You Scared? (Movie Review) 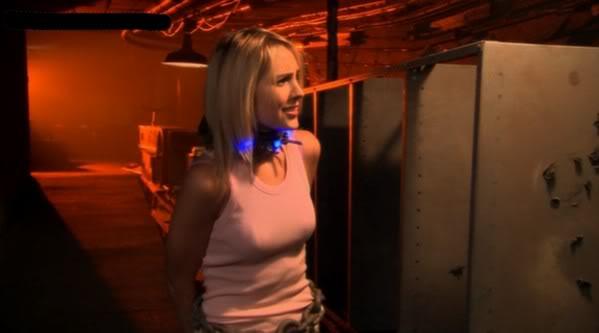 In the horror drought that follows October, people get desperate for scares – desperate enough to wade into the Watch Instantly vaults and watch damn near anything in hope that it will be either sufferable or incredibad, which is how I imagine most viewers will find “Are You Scared?” Unfortunately, the film evokes neither of those adjectives.

According to the IMDB page for the film, “six kidnapped terns realize they are contestants on a reality show called 'Are You Scared?'” Sadly, this is a typo – there are no crested seabirds in this film at all. The lack of terns is only the first indignity that writer and director Andy Hurst subjects viewers to over the course of 79 grueling minutes. Hurst has also written direct-to-video sequels for “Wild Things” and “Single White Female,” as well as the most recent chapter of the “Wild Things” saga - “Wild Things: Foursome.”

So, here is the premise: there is a reality show called “Are You Scared?” People send in videos to audition for the show. Lucky applicants are then abducted and taken to an abandoned building where they are placed in death traps based on the fears they confess to in their audition videos. There is some heavy-handed explication on the 'lesson' behind these games – either that it is important to face one's fears or that, as one of the cops investigating the murders puts it, “a merciful death is better than a lifetime of pain.” This pearl of wisdom is uttered after the police find a victim who had been forced to walk across broken glass and then tricked into dunking her head into a tank of acid, neither of which seems particularly merciful.

Brandon is afraid of the dark, so he is killed with shotguns. Jason is afraid of coming out of anesthesia during surgery, so he explodes. Dylan and Cherie are twins scared of losing each other, so one of them gets a drill through the head while the other one gets forgotten about entirely in the third act. Laura – I'm not even sure what happens with Laura; potentially, she is eaten alive by rats offscreen. Kelly is afraid that someone will discover her dark secret.

Which – well, let's think about that. A person with a dark secret applies to be a contestant on a television show about facing your fears and confesses that the discovery of that dark secret is her biggest fear. Who expects that to end well? Although more unexpected still is the eventual revelation that the killer is actually Kelly's presumed-dead abusive father, who has concocted this 'fake reality show murders' scheme to locate his prodigal daughter.

“Are You Scared?” is a clear attempt to make a cash grab on fans of the “Saw” franchise. Hell, in Japan the film was released as “Jigsaw: Game of Death,” which basically tells you all you need to know. The film is a lazy, lazy rehash of the “Saw” formula – gritty industrial setting, kidnapped strangers, elaborate death traps, a cop thriller storyline running parallel to the horror – but without any of the resonance that the “Saw” franchise manages to salvage from even its lowest moments.

Between its low budget, a cast that emotes like the zombie extras on an episode of “The Walking Dead,” a premise that's been done better by other bad movies and a plot full of asinine intricacies, “Are You Scared?” should be avoided at all costs, unless it's for a drinking game or a bet and, even then, I'd advise serious caution. Unless you're listening to the Rifftrax commentary, that is.