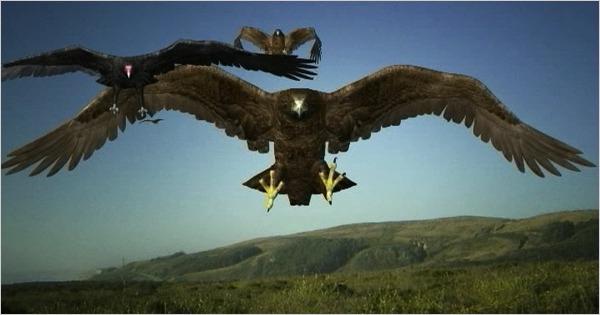 Most people are born with important skills. Some individuals are naturally good at sports, while others have the ability to formulate mathematical equations used in the production of nuclear weapons, expensive over-the-counter acne creams, and Sudoku puzzles. Yours truly, on the other hand, was been blessed with the capacity to consume terrible low-budget motions pictures without suffering the unsightly side effects generally associated with this particular brand of filmed entertainment. This odd little skill certainly comes in handy whenever I'm forced to endure a motion picture that's been painfully excreted from the encrusted backside of Hollywood's diseased digestive system. Given my taste in movies, I guess this is a blessing.

In essence, I was born to watch writer/director James Nguyen's infamously awful 2008 romantic thriller "Birdemic: Shock and Terror", a film that has recently become something of a cult hit with bad movie aficionados across the globe. Judging from the countless press releases I've received courtesy of distributor Severin Films, it would appear that "Birdemic" is the spiritual successor to such like-minded endeavors as "Troll 2" and Tommy Wiseau's impossibly entertaining melodrama "The Room". And while the movie lacks the indescribable magic of the aforementioned titles, Nguyen and company have definitely left their own unique skidmark on the heavily-soiled underpants of the medium.

The first forty-five minutes of this perplexing pelicula are devoted to the budding relationship between cocky software salesman Rod (Alan Bagh) and wannabe supermodel Nathalie (Whitney Moore). Rod's company was recently purchased by a large faceless conglomerate, an event that, according to our painfully awkward hero, is the answer to all of his "Silicon Valley dreams". The curvy blonde object of his misguided affection, meanwhile, has just landed a high-profile modeling contract with lingerie kingpin Victoria Secret. It's a match made in nerd heaven, a bed-wetting geek's dream come true. In the world of "Birdemic", anything and everything is possible.

However, like most whirlwind romances, someone -- or something -- always shows up to toss a giant monkey-shaped wrench directly into the well-lubricated cogs of their ill-fated love machine. During an excursion to a local beach, our lovely young couple discovers that a large swarm of eagles and vultures have begun a relentless assault on the human race, disrupting our well-crafted civilization and causing random explosions to scar our delicate American landscape. In order to survive this remarkable series of events, Rod and Nathalie must team up with another pair of attractive twenty-somethings who just so happen to have a large stash of automatic weapons in their SUV.

By definition, no one with the capacity for rational thought should like "Birdemic". The performances are soggier than a pool hall urinal cake, animated GIFs are routinely used as special effects, the pacing is extremely clunky, and the tacked-on conclusion is the epitome of anti-climatic. That being said, all of these wonky elements ultimately seem to work in the film's favor. Despite all of these inexcusable flaws, "Birdemic" is never boring, irritating, or unwatchable. Nguyen has completely redefined the "so bad it's good" experience; even those who possess a low tolerance for wretched cinema will have no problem embracing the film's inherent goofiness. It's the most accessible piece of crap I've ever seen.

Simply put, “Birdemic” is one of the most satisfying, wholly enjoyable movies I’ve seen thus far this year. No kidding. Of course, it also happens to be one of the absolute worst. Successful Hollywood producers, you can keep your A-Teams, your alien conspiracies, and your Iron Men -- James Nguyen knows precisely what the masses want, and he’s not afraid to deliver his independently-produced alternatives with the grace of a legless chicken playing ping pong in a uncharted Cambodian village. Ignore the rough patches of audio, the amateurish direction, and the oodles of inexperienced performers. “Birdemic” exists on a much higher plane, one that can only be accessed by those who are willing to forget what they’ve been taught at their local Cineplex. Embrace your inner Joe Bob Briggs. Watch and love "Birdemic".