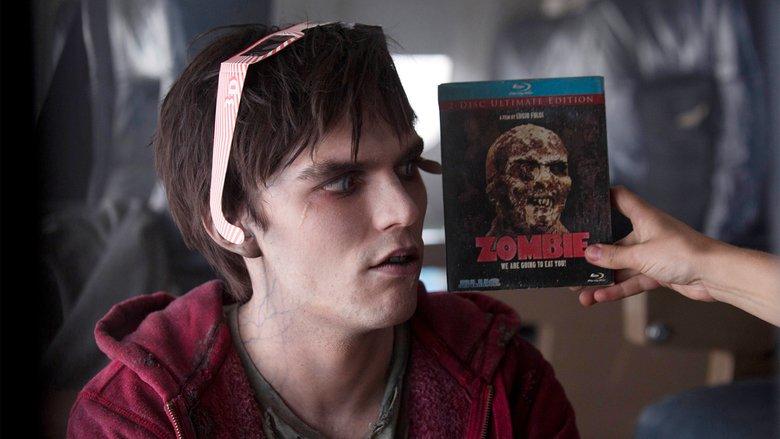 The simplest way to conform to the general horror market is with a story revolving around zombies. While the genre typically seeks to bend and morph with the changing times, the saturation of certain sub genres becomes inevitable. Zombie films are definitely one of the top sub genres to explore as they not only satsify the horror die-hards but also the general public that want to dip their toes into the bloody world. The Walking Dead and Resident Evil films rake in the revenue and viewership that keeps the genre alive, but what about the stories that subvert the sub genre? Shaun of the Dead is a shining example of subversive success with its dry, nerd-speak permeating every frame. Another, Warm Bodies directed by Jonathan Levine and adapted from the Isaac Marion novel. Much like the nerd-centric approach that Shaun of the Dead takes, Warm Bodies pulls its best moments from the zombie universe while also hearkening to the popularity of the times. In a world obsessed with Twilight and the budding love story between different creatures, the film marketed itself as just another brooding "girl falls for monster" story, but in actuality gave a free-spirited and excited look into the trials of "killer kisses girl".

R (Nicholas Hoult) can't seem to remember where exactly his life began and ended. Yes, he walks around, eats his daily meals, and contemplates the complexities of life, but he's technically dead. Once the world experienced the downfall of the human race, the zombie-fied culture began to emerge leaving all of the survivors to either fight back or join the dead ranks. R's daily questioning of life becomes more complicated once he meets the human survivor Julie (Teresa Palmer) and falls in love with her. With feuding worlds that seem to show no sign of coming together, R and Julie are forced to tackle their differences head on, brains and all.

Essentially, Warm Bodies is a zombie film that meets Romeo and Juliet. While that elevator pitch might sound like a terrible decision, thankfully the writing, performances, and overall story make it become a good time of a film. The dynamic between the human survivors and zombies is thoughtfully accented by the inner monologues of R that deliver not only insight into the landscape of the world but also the humor of the situation. The satirical look at consumerism in Dawn of the Dead focused around the laziness of zombies shuffling around the only place they knew well: the mall. Warm Bodies handles that commentary well by revealing the inner feelings of the seemingly undead, unthinking shuffling bodies. Despite R being a walking corpse, Nicholas Hoult's understated and warm inner monologues really draw the viewer into his feelings. Once Julie enters the picture, that dynamic between the two is strong since the focus of the narrative has been placed on R's shoulders. The monster is no longer mysterious, and instead, is revealed to be the "every man" of most narratives.

The addition of the "Bonies", the new skeleton-zombie race that mixes up the war between humans and monsters was a smart decision as it still allows for that ultimate evil for both groups to stand up against. This also allows the Romeo and Juliet storyline to not feel completely forced or like a rip-off of an elevator pitch. The thought and decisions made in writing this story are apparent through these simple additions to not just be another "monster meets girl" storyline. Ultimately, Warm Bodies manages to be a great time for any type of viewer.