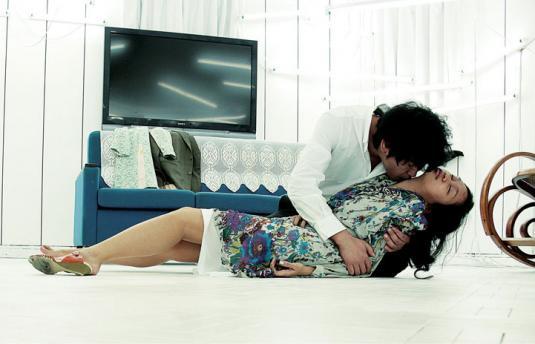 For whatever reason, we seem to be living in the age of vampire love. It seems you couldn’t walk into a cinema or turn on a TV this year without seeing a person conflicted about their desire to bang an animated blood-drinking revenant.

What’s remarkable is that instead of being a bunch of copycat efforts mining the same ground Anne Rice made her name with, these takes on vampire love couldn’t be less alike. From chaste and sanitized (“Twilight”) to steamy and overwrought (“True Blood”) to icky and disturbing (“Let the Right One In”), no matter who you are or what your tastes are, there’s probably been a sexy vampire movie for you. Maybe the only sliver of viewers whose forbidden vampire love needs have gone unmet are those who have been holding out for a highly stylized Korean movie combining equal amounts of slapstick and pathos about a Catholic priest vampire having an affair while struggling to come to terms with man’s nature as neither angel nor beast. I hope the other three of you are as excited as I was.

“Thirst” is exactly the kind of vampire movie you’d expect from Park Chan-wook, one of the most unique and talented directors working today. That is, it’s completely unexpected. In a bull market for vampires, Park’s bloodsuckers stand out as a fresh take on old material by eschewing monster movie clichés and replacing them with nothing less than doomed romance, an almost Hitchcockian study of the effects of guilt and the duality of good and evil. With fart jokes.

Song Kang-ho stars as Sang-hyeon, a big-hearted priest who travels to Africa to participate in an experimental treatment for the deadly Emmanuel Virus. Sang-hyeon is infected with the virus, but survives and upon his return home, his recovery is treated as a miracle and his parishioners begin treating him as a living saint with healing powers. One of these parishioners insists on the priest tending to her son, Kang-woo, who also happens to be a childhood friend of Sang-hyeon. Kang-woo is married to Tae-joo, a petulant girl who is so miserable with her loveless marriage and overbearing mother-in-law that she sneaks out at night to run barefoot through the streets in an attempt to escape her reality, if only temporarily.

The Emmanuel Virus, of course, has turned Sang-hyeon into a vampire and with his newfound craving for blood (which he humanely satisfies using a coma patient’s IV) he finds the urges for sex he has literally beaten down all his life have become just as persistent and irresistible. Tae-joo is equally starved for affection and soon the two of them begin an affair. When Tae-joo discovers and accepts his true nature she sees his dark urges as a possible way to free herself from her unhappy life.

“Thirst” could probably keep film studies majors busy for semesters writing about its themes of religion and gender and morals but for all the heavy stuff going on underneath the hood, it’s still an entertaining, unpretentious movie that almost plays out like a fairy tale, although, granted, this would be one of the nasty, blood-soaked, pre-Disney fairy tales as originally written by the Brothers Grimm. The film alternates between silly, sad and the supernatural and pulls all three off with grace and charm. Some viewers who aren’t accustomed to Asian cinema might find the wild tonal shifts jarring but without the delicate balance of a variety of tones the film could easily tip over into art film pretentiousness or horror-comedy cynicism.

One of Park Chan-wook’s calling cards is his stunning visual style and “Thirst” continues this tradition with interesting camera movements and carefully composed frames that use every inch of the screen to tell the story. One exhilarating sequence of Sang-hyeon bounding across rooftops with Tae-joo whooping and laughing in his arms pays tribute to the freedom and joy in the similar scene from “Superman” when Lois Lane is treated to a nighttime flight across Metropolis. Later in the film as paranoia and guilt begin to take their toll on the relationship, the characters attempt to bring daylight indoors by hanging florescent lights everywhere and painting the walls blinding white. When the inevitable blood gets shed against the white on white background the film takes on the look of a stylized comic book come to life.

“Thirst” is a stew pot of disparate plot elements, wild tonal shifts and deep-ranging thematic concerns but at its essence it boils down to a story about a relationship that starts in joy and ends with bitterness. For all of today’s obsession with vampire romance, it’s not hard to realize that a relationship with a vampire wouldn’t just be a bad idea, it would be a terrible idea that could only end badly. Anyone who has been through a failed relationship will be able to look through the blood-drinking, the murder and the supernatural powers of “Thirst” and see a universal story about what happens when two people who once cared for each other realize that their relationship has gone toxic and that now they are mutually harmful for each other.