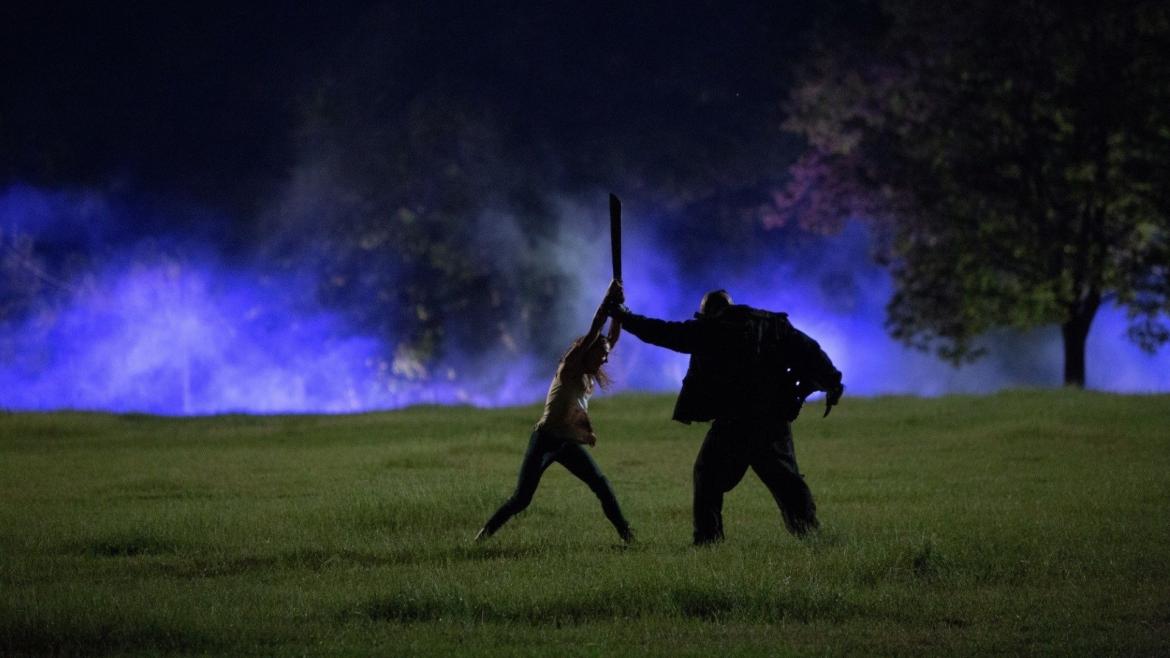 In the golden age of the slasher film, a pattern of sorts began to develop.  You needed a killer (often masked), a group of unwitting teens (with a variety of proclivities), and a survivor. That survivor was, more often than not, the shy one, a virgin, and a girl. This character is one that horror fans have been aware of since before she was given a name – the Final Girl. Coined by Carol J. Clover in her book "Men, Women and Chainsaws", the final girl is, “the one who encounters the mutilated bodies of her friends and perceives the full extent of the preceding horror and her own peril; who is chased, cornered, wounded; whom we see scream, stagger, fall, rise, and scream again”. The final girl has been repeated, recast, and reimagined; and it is from this legacy that M.A. Fortin and Joshua John Millers’ The Final Girls is born.

Max is a high school senior who still bears emotional scars from the death of her mother – an aspiring actress – three years before. When a local movie theater, schedules a showing of the campy (no pun intended) slasher that launched her mother’s career, one of Max’s friends reaches out and asks her to make an appearance. But a Final Destination-esque series of events sets the theater ablaze and in their effort to escape Max and her friends find themselves inside the film.

The Final Girls is far from the first movie seeking to subvert horror tropes. Nor is it the first to have self-aware characters in the style of Jamie Kennedy’s quintessential Randy (Scream) who can pontificate on the “rules” ad nauseum, but it is the first to have characters who understand completely that they are in a movie themselves. Despite all the lines in Kevin Williamson’s iconic 1996 screenplay pointing out again and again the parallels between life and movies, the characters never leave their universe, and are never aware that the events befalling them are all occurring on a silver screen. Max, Gertie, Chris, Vicky, and Duncan are all painfully aware that their survival is as tenuous as the frames of celluloid they’re trapped in.

This awareness creates a very intriguing contrast between the “movie” characters and the “real people” and the way that the audience experiences their story arcs and their inevitable demises. For all of our knowledge of the horror “rules”, the real life implications for the deaths of the interlopers are unclear, and it makes their peril feel more real than their archetypal counterparts. The effect is jarring. All of the characters are just that, characters in a movie, but the way the audience feels what happens to them says something about our perception of stories and of characters in those stories.

The film also does a great job of subverting tropes without falling into a familiar structure. This is due, in part, to the presence of the outside forces of the Millenials who know what’s coming and seek to zig when they’re supposed to zag. But it goes beyond that. Fortin and Miller do an unbelievable job of bringing to life a story that is engaging and unpredictable, making for a satisfying journey from start to finish for fans who are all too familiar with seeing vaguely original versions of the same story over and over again.

Now, I would be remiss to not address the emotional arc that is at the heart of this movie. Much has been made about the story between Max and her mother, who she is reunited with (in a fashion) during her stay at Camp Blue Finch. Some genre lovers may be turned off by the prospect of a sappy story like this, and their instinct would not be unfounded. Horror films have perpetrated a variety of sins when trying to create empathy for their characters in cheap and hackneyed ways (think a failed marriage proposal; I’m looking at you Back Country and Extraterrestrial). Perhaps it’s the novelty of these circumstances, but this story just works. The relationship between Max and her mom is just sweet enough without being saccharine, probably due in large part to the chemistry between Taissa Farmiga and Malin Akerman.

There is so much more here to praise, but suffice to say that this is one you’ll have to see for yourselves. The super-eighties soundtrack and stylized cinematography are amazing and the cast of characters is a real treat to watch in every single scene. Keep your eyes peeled for the stunning slow motion sequence, which is particularly remarkable. Long live The Final Girls.