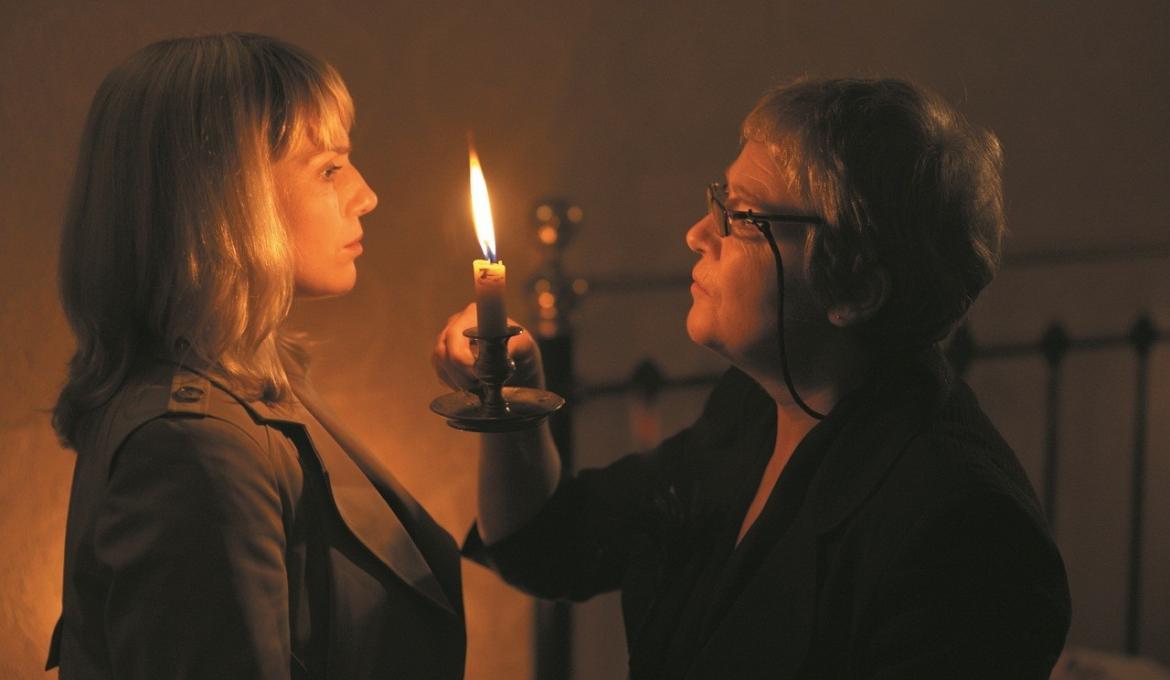 “Wake Wood” has been billed as the triumphant return of the Hammer Studios to the horror genre. For those who aren’t up to speed on Hammer, they are the studio that really authored the look and feel of UK horror in the 50’s, 60’s and 70’s, by making-over gothic horror tales with more overt violence and more accessible psychosexual undertones. Hammer helped to make celebrities of Christopher Lee, Peter Cushing and more than few voluptuous British lovelies. In 2000, Hammer was reanimated from a state of dormancy dating to mid 80’s by group of new backers, including art collector and advertising tycoon Charles Saatchi. “Wake Wood” represents the rejuvenated studio's first foray into feature length storytelling; though a serial web series called “Beyond the Rave” was their official return to the realm of production. “Wake Wood” tells the story of a young couple, Patrick, a veterinarian and Louise, a pharmacist who have escaped to the tiny Irish town of “Wake Wood” following the tragic dog-mauling death of their 6 year old daughter Alice. On their way home one night the couple breaks down near the estate of a local businessman named Arthur. While on Arthur’s property Louise witnesses a strange pagan ceremony and later that evening the mysterious magnate visits the couple with a proposition. If they agree to remain in Wake Wood for the duration of their lives and Patrick consents to serve the community’s animals faithfully, Arthur and the townspeople will bring Alice back to life for 3 days, so that they can say a proper goodbye. The pact is made and after a ceremony involving cow excrement and the insertion of Alice’s decomposed finger into the corpse of and old man the child is reborn at exactly her age of death. The couple enjoys a blissful first day with their daughter before things begin to go awry. The next day a local woman takes the child aside to assess her for (relative) normalcy and finds that something is amiss. That evening the townsfolk come to the house to demand that Alice be returned to woods for re-interment lest horrible things begin to happen should she remain at large. Patrick refuses to let her go and Arthur grants the couple one last night with their daughter. But Alice has already begun to savage the local fauna and will soon turn her new found violence towards the people of Wake Wood. I was cautiously enthused about “Wake Wood”. I grew up watching the old Hammers on “Creature Features” in the SF Bay Area and hoped that the update of Hammer would breathe new life in to the studio. After seeing the trailer my expectations dimmed a little, but I was still somewhat excited when I got the screener in the mail. Simply put, “Wake Wood” is a bunch of good ideas that are either incomplete or sabotaged by the filmmakers' execution. It is very hard to tell the order of the problems, but the editing is bad, so is some of the framing and often the shot selection. The music is filler at best and the story seems to add new plot and character wrinkles in the 11th hour to ramp up the scare factor. “Wake Wood” would have been well served to set a slower pace for itself and offer the audience a chance to soak in the atmosphere. Instead the set-up is rushed and the main characters feel like facsimiles of people who have lost a child. Some of the blame lies at the feet of Eva Birthistle, who is not a bad actress but often looks unsure of how to express her fear and pain. Of course, the scenes where she is asked to do so are so shoddily cut that the performance may well suffer for it. What we don’t know is was it cut this way to get around shooting errors? The case for this could be easily made based on the film’s Soap Opera sheen and the all-to-clear, non-filmic depth of field that the cinematographer and director decided on. What is more, there are dozens upon dozens of lighting mistakes herein which are only made worse by bad compositing and CG animation that was totally non-essential to the film. The good in “Wake Wood” is that the producers seemed to have some fun with the violence (though I am not sure that it plays in the same key as the dire tone of the story). There’s a very real cow caesarian, a few nice killings toward the end and as I said a good story idea buried somewhere within the patchwork production values. It is an early outing for the new Hammer, so hopefully they are just working out some bugs here, but even giving them the benefit of the doubt on that I can’t recommend “Wake Wood”.