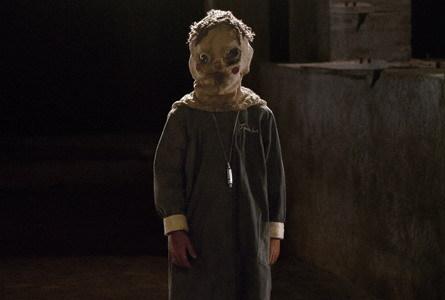 The opening scene of “The Orphanage”shows a girl repeatedly knocking three times on a tree and then looking back over her shoulder. As she does this a few times we gradually see that this is part of game and when she has her back turned some other children are creeping up on her, only to freeze when she turns to look at them. It's an apt beginning for a story where looking for something only keeps the truth hidden, not to mention a clever set-up for an appropriately creepy call-back later in the film.

Laura, the girl playing the game, is soon adopted and leaves the orphanage behind but as an adult she is drawn to the place where she spent her early years and buys it with the intention of moving her family in and starting an orphanage of her own. Until the legalities are sorted out and the new orphans arrive her adopted son Simón is on his own in this new environment.

He begins playing a treasure hunt game with some new imaginary friends, who in typical ghost movie fashion, turn out to be not quite so imaginary. In short order Simón begins drawing a masked figure and mysteriously learns some secrets his foster parents have kept from him before finally disappearing without a trace. Racked with grief, Laura spends the second and third acts of the movie attempting to find Simón by investigating some dark events involving her own past.

Director Juan Antonio Bayona has clearly learned a few tricks from producer Guillermo del Toro's Spanish-language horror films and employs them to suitably spooky effect. The film looks and sounds fantastic with the beams of flashlights cutting through dark rooms and creaking doors and the groans of playground equipment blowing in the wind adding to the creepy ambiance. The biggest problem is underneath the grand cinematography and eerie atmosphere lies a film that is as derivative as it is well-made.

“The Orphanage” is a classic example of the 'supernatural thriller', that is, a horror film for people who turn their noses up at horror films and like to point out how thrillers like this and “The Sixth Sense” and “The Others” can be create frights without gore or special effects or jump scares (though “The Orphanage” does sport a few). It's certainly not an invalid point and this kind of film does require more talent to make than a typical slasher film, but just because the film feels classier doesn't make its subject matter any less well worn.

The film plays out almost as a mash-up of a handful of classic horror films. It starts out as “The Shining”, threatens to veer off into “Poltergeist” territory for much of the second act and ends up as yet another story of ghosts seeking vengeance for past wrongs. The ghost in this film wears a burlap mask; the ghosts in J-horror movies have long dark hair. Peek beneath the mask or behind the hair and you'll find pretty much the same story of ghosts seeking redemption for sins of the past.

All derivative aspects aside (not to mention a few major plot holes that can't be discussed without spoiling the movie), “The Orphanage” is an exceedingly well put together movie and heralds the arrival of a talented first-time director. There is a reason some stories are told time and time again and this film succeeds as much as any film can in the daunting task of telling an overly familiar story in a way that makes it worth hearing again.