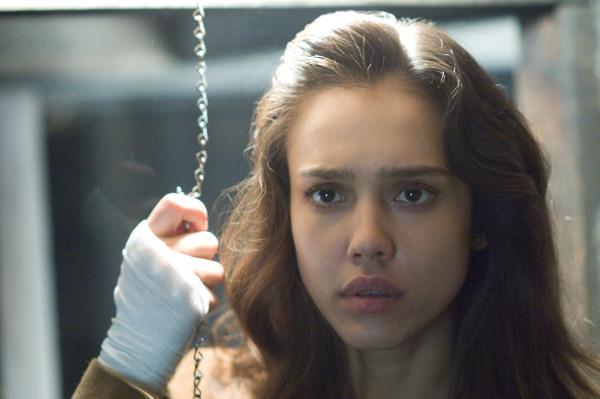 Lions Gates "The Eye" is a remake of the 2002 film from Hong Kong by The Pang Brothers, an international hit and favorite to many horror fans. Let me start off by saying that from what I can remember, this remake is fairly faithful to the source material. However, it has been years since I've seen the original, so this review will mainly be an objective take on this American version.

The film opens with a flash of a young girl hanging herself. We then flash forward (presumably) and meet Sydney (played by eye-candy turned actress Jessica Alba) as an award winning concert violinist, who just happens to also be blind. As the film opens, she is preparing for a corneal transplant. We quickly fast forward to the next morning, bandages on her eyes, as she meets a little girl with a tumor in her head at the hospital. The two exchange greetings and become fast friends. A few moments later, the doctor arrives and prepares to take off Sydney's bandages. As he takes them off her vision is still very blurry, but in the background she does notice some shadowy figures, and the audience quickly becomes aware that something is not quite right.

Alba is taken home by her sister, played by Parker Posey, and begins adjusting to her new life (and her newfound sense of sight). She attends regular sessions with Dr. Faulkner, a young specialist whose job it is to try and help Alba adjust to the new world around her. Things become tough for her however, because as soon as she begins to see clearly, she begins to see horrifying things that are not there. Mainly, she sees dark shadowy figures that appear to be following people around. As the film progresses, we learn that these figures are "Grim Reapers" of sorts, always appearing next to people right before they die.

Although Sydney's doctor refuses to believe her visions, she begins researching something called "cellular memory", a phenomenon where transplant recipients begin to take on characteristics and memories of their donors. Convinced that she is living out the horrifying death of the former owner of her eyes, she and the doctor eventually set off to Mexico to find the family of the girl, and try and put an end to her misery.

People are going to have a hard time believing this, but Jessica Alba as the lead in this film is actually very good. I've already had people tell me that they don't believe me, but let me say this: As someone who has seen the entire first season of Alba's show "Dark Angel" on DVD recently, I can confidently say that her turn in this film is nothing short of a miracle. She still seems to have trouble selling physical movements, but her delivery, facial expressions, emotional connection with the audience... have all improved ten-fold from her early years. I hesitate to say this, lest people think I've lost my mind... but I truly think that Alba may be coming on to a real renaissance as an actress. Plus, for my money, she's the hottest woman on the planet. So, you know, she's got that going for her.

It's too bad then that her solid performance was wasted on this limp remake of (what I remember as being) a particularly good example of the "A" horror genre. This film, instead of really honing it's visuals and suspense, relies on cheap jump scares that fail to ever get underneath the viewers skin. The whole second act of the film consists of the same boring layout over and over. There's a scene where Alba tries to adjust to her new eyes, she then sees something strange and inevitably follows it down the hall (or wherever she happens to be) until the audience is assaulted by another one of their clever "jump scares".

The characters - with the exception of Sydney - suffer from a severe lack of development. The doctor who is helping her adjust to the seeing world might as well have been called "Generic Sexy Doctor #1". We're told at one point in the film that Sydney's flight attendant sister is the main reason why she decided to have to the corneal transplant. Apparently her sister has always felt responsible for her blindness - they were playing with firecrackers as children when it happened - and so she was the one who pushed her to have the procedure to correct the problem. If you can get over the fact that we're supposed to believe that Alba and Posey came out of the same vagina, it's an interesting attempt at adding layers to their relationship. Unfortunately it is mentioned only in passing, and is never really explored deeply enough to add any type of dimension to the characters.

It's hard to really hate on this film because well, it's just not that bad. I really connected with the character of Sydney and her sadness relating to the fact that no one believes what is happening to her. Plus, the story picks up during the third act, when they finally decide to move the plot along. The writers, to their credit, wisely decided to leave the final scene from the original film intact (with the shattering glass). I can't say that it was pulled off as effectively as it was by its predecessor, but it's still a fascinating twist of fate to inflict on our heroine. There were even a few moments during the last act when I was semi-interested in what was going down, even though I was never fully engaged in the story.

When I had time to sit down and ponder "The Eye", I came to the conclusion that its biggest sin as a film is that it never once excites the viewer in any meaningful way. The visuals are limp, suspense non-existent and character development conspicuously absent (not to mention the really corny voice-overs at the beginning and end). Sure, it's very faithful to the original, and sure Alba gives a great performance as the lead. Had this been released three or four years ago when everyone and their brother were still excited about Asian horror, maybe I would feel differently. As it stands however, it's simply a case of "too little, too late" for this "A-Horror" remake. If you do decide to watch it, you probably won't hate it, but you certainly won't like it either. Consider yourself warned.