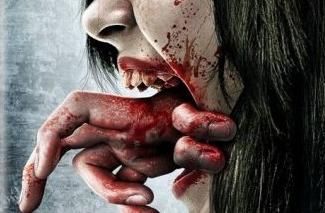 The “Yeogo gwae-dam” franchise of films, better known in the west as the “Ghost School” or “Whispering Corridors” series, is one of the highest profile Korean horror properties, covering four films in the last ten years. The films aren't directly linked, but rather each film is a standalone story with the common thread being that they all involve ghosts and are set in an all-girls school. It might be surprising that perhaps the most popular Korean horror franchise has never been tapped for a Hollywood remake but truthfully most of the films barely qualify as horror. They'd more accurately be described as artsy high school melodramas that all happen to feature ghosts. What's really surprising is that these slowly-paced, melancholy films are marketed towards teenagers in Korea and they couldn't be further from the dumb, frenetic, ADD-stricken style of American teen horror films.

“Voice”, the fourth and most recent entry in the series, is the story of two friends, Young-eon and Sun-min. One evening aspiring singer Young-eon is practicing in the empty school when she feels a strange presence and has her throat slit by a fluttering sheet of music. The next day school goes on as normal and Young-eon realizes that she has become a ghost and no one can see her. Her body is nowhere to be found and most people presume she has gone to visit her mother's grave with only her friend Sun-min wondering what has happened to her.

After unsuccessfully trying to communicate with her classmates and teachers, Young-eon finds that Sun-min is apparently the only person who can hear her voice. The two girls work together to find out what happened to Young-eon, and over the next few days as other dead bodies turn up they learn that there is more than one ghost in the school and that there are some secrets about herself that Young-eon isn't even aware of.

The idea of a ghost trying to solve her own murder when her only link to the physical world is through her voice is a very promising premise that could yield an interesting mash-up of the mystery and horror genres. Unfortunately, “Voice” suffers from the two most common complaints western audience have about Asian horror films – slow-pacing and a hard-to-follow, contrived story. There are long stretches of the film where nothing much happens and almost every scene goes on for a minute or two too long. At 104 minutes “Voice” will probably test the patience of many viewers. To the film's credit, for most of its runtime it manages to tell the story in a straightforward, coherent manner, but by the finale when a second Young-eon shows up to rattle off exposition and narrate a series of flashbacks many viewers will be left scratching their heads.

Narrative problems aside, the film looks great and is somewhat reminiscent of “Suspiria” not only for the similar setting but also for its visual style. The school is rendered in dusky earthtones by day and is bathed in the stark red of the security lights by night, serving as a neat visual contrast between the worlds of the living and the dead. One sequence in particular, where the girls encounter a ghost in an elevator is visually quite memorable even if it does lose some of its effectiveness by going on a little too long.

In the end, “Voice” isn't going to convert anyone to Asian horror who isn't already a fan. If you enjoy this kind of film and know what you are in for, and don't mind the slow-pacing and a somewhat silly storyline, then this is a great example of an Asian ghost film. Non-fans should probably just stay away because as intriguing as the premise is, the film is basically a murder mystery that is likely to disappoint when the answers are revealed. As flawed as the film is, this is the rare case where I actually wouldn't mind seeing a Hollywood remake. The premise of the film is very strong and a slightly reimagined version of “Voice” that relies less on shocking twists and more on solid, plausible storytelling could definitely improve on the original.