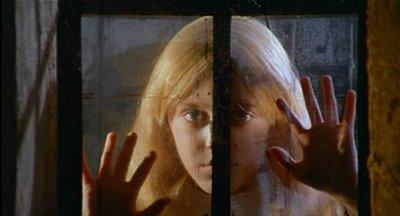 One of the common pitfalls fans run into when dealing with Italian genre movies from the 60s and 70s is wildly inaccurate or misleading titles. Despite there only being one official sequel, you could program a weeklong film festival with Django movies and an Italian, a German, a Brit and an American could pull off a pretty good “Who’s on first?” routine when trying to have a discussion about the series of movies spawned by Dario Argento’s edit of “Dawn of the Dead”. “Kill, Baby… Kill” is saddled with what Videohound’s Tim Lucas (who literally wrote the book on Mario Bava) has called “the worst title in the history of horror movies” and even its original Italian title “Operazione Paura” (“Operation Fear”) hardly hints at the lush gothic ghost story that hides behind the goofy names.

The film takes place in the early 1900s as a remote Eastern European village is plagued by a rash of unexplained deaths. An inspector and a doctor are called in to investigate and they find that the villagers attribute the deaths to the ghost of a little girl who died in an accident 20 years earlier. What follows is a science vs superstition story featuring a sexy sorceress, mortification of the flesh, creepy dolls and and an evil little girl so iconic that she influenced similar characters in later movies made by no less than Fellini, Scorsese and, erm, feardotcom’s William Malone.

If you’re watching a Bava movie for the story, though, you’re missing the point. Bava had style for miles and miles and every second of the film oozes with atmosphere even when the plot starts to drag. It might be an acquired taste for some who aren’t used to the dissolves, 50 yard crash zooms, and “now it’s in focus, now it’s not” style of filmmaking, but if you have any affection at all for the golden age of Eurosleaze “Kill, Baby… Kill” is an hour and change of pure eye candy. Sure it’s campy at times; the performances only come in two flavors: wooden or manic and it looks like about half the film’s budget went to spider webs, suits of armor and colored light gels. There’s no mistaking a Bava film, though, and even the flaws end up contributing to the sense that you’re on an acid-tainted ride through a dangerous and sexed-up European off-brand version of Disney’s Haunted Mansion. Pro-tip: there are a variety of versions of the film floating around but if you can get a copy subtitled in the original Italian it goes a long way to toning down the unavoidable cheese factor of the English dub.

The film is at its best when it veers off into full-tilt delirium. Bava was a master of trick photography and one of the originators of the POV shot that later became a hallmark of giallos. In some scenes the camera stands in for the ghost, peering through windows and looming over sleeping victims. In one memorable sequence a static shot of the exterior of a building begins to sway back and forth like a child on a swingset, and we realize that we’re spying on the characters through the eyes of the ghost. Bava is constantly trying to disorient us and keep us on edge whether it’s through the doctor running through the same room, over and over again until he catches up with himself or through a character running down a spiral staircase but getting nowhere. In another scene the doctor becomes entangled in a spider web covering a mural of the outside of a mansion and when he finally breaks free of the web he finds that the mural has somehow turned into the actual mansion and he’s been transported outside. Для того чтобы скачать казино Вулкан на андроид с источника , потребуется несколько минут. Загрузку такой азартной игровой платформы сможет выполнить любой обычный пользователь. Достаточно запустить скачанный установочный модуль, и он самостоятельно проведет разворачивание в телефоне необходимых компонентов и автоматически осуществит все требуемые настройки.

“Kill, Baby… Kill” might sound like the title of a Russ Meyers movie filled with tight sweaters, go-go boots and catfights but it’s actually a masterpiece of lurid gothic horror as well as a landmark film with a influence that can be seen today in works as varied as “Twin Peaks”, “The Devil’s Backbone” and the whole “creepy little girl ghost” ghetto of J-horror. They really don’t make movies like this anymore and “Kill, Baby… Kill” is ripe to make new Bava fans out of watchers who can appreciate his brand of atmosphere-drenched filmmaking with a unique visual flair.