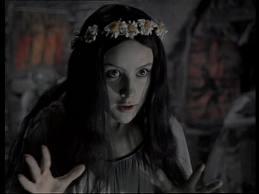 "Viy" is a Soviet Union era movie about a young seminarian named Khoma, who takes some kind of pilgrimage with two other priests in training. On their first night they stop to sleep at an old woman's house. For some reason the old woman seems to take an liking to Khoma in particular, and she corners him in a stable, and she catches him and picks him up, and begins to fly through the countryside with him. Apparently the old woman is a witch and when Khoma realizes this he flips out and beats her to death with a stick, but before she dies she turns into a beautiful young woman.

Khoma flees the scene and when he gets back to his seminary the head priest tells him a young woman was beaten to death, but as she died she told her father that she asked for Khoma, by name, to pray for her three nights before her burial (I assume that the three nights of prayer were to symbolize the three days of Christ's death and resurrection). Khoma is terrified because he realizes it is the witch, but he is forced to carry out the task anyway.

On the first night when he goes to pray for the witch she comes to life, and Khoma draws a sacred circle around where he prays, so she can't hurt him. On the second night her coffin flies around the room and tries to smash through the circle. On the third night the witch summons all manner of intricately designed demons and monsters to destroy Khoma for her. There are so many of them that they literally come out of the wood-work, and the witch eventually summons one final demon named "Viy", with the ability to see Khoma through his sacred circle.

"Viy" is a pretty fun movie, that at times had a dream-like quality that reminded me a bit of The Wizard of Oz visually; probably because they are both early color films about witches and monsters. The majority of the film is spent with Khoma, the bumbling and drunken hero, hanging out with locals, who are all mostly poor farmers. The people of the film seem to have a very strong sense of community that revolves around the church, which is something that really made "Viy" feel unique to me, especially compared to earlier American movies I've seen. Although I'm not especially familiar with earlier American films, I honestly can't recall watching one where church and community were both so important.

This was a strange film but the one thing that suck out to me me as incredibly odd, in particular, was that the witch became such a beautiful woman after Khoma beat her, and as Khoma prayed for she she maintained her youthful form. I thought they were setting up some kind of sexual tension between the witch and Khoma, but for whatever reason there wasn't any whatsoever. In fact I don't think the two characters exchanged any sort of conversation throughout the whole movie. Even while Khoma was praying for her, and she was trying to kill him, neither of them had anything to say to the other. Despite the fact that Khoma had killed the witch, I found myself completely baffled by why the two were at odds to begin with. I can only assume that in Russia priests and witches were always considered mortal enemies.

Unfortunately the pacing of the movie is very awkward, which was by far the biggest flaw of the film. "Viy" is a fairly short movie, and at 77 minutes, it felt like it should have been a little shorter. There are a few stretches during the movie where nothing is happening and it seemed like it might have been better served if they had axed another 10-15 minutes. Plus the entire movie builds up to the three nights of prayer, and each night of prayer is fairly anti-climactic as only lasts two to three minutes on screen. Even the finale, which is admittedly pretty amazing, is so short that it feels a little anti-climatic also. The fact that all the action occurs over three separate encounters also makes the pacing very awkward. I understand the nights of prayer were broken up into three separate scenes because three nights of prayer were the tradition at the time, however I still feel like it could have been handled a lot better.

If the pacing of this movie had been better then I think "Viy" would be a real classic. Unfortunately it isn't. However the characters are pretty fun, and at 77 minutes, watching the movie isn't much of a commitment. If you are curious to see what a Soviet-era horror film would look like then I'd say definitely check it out.