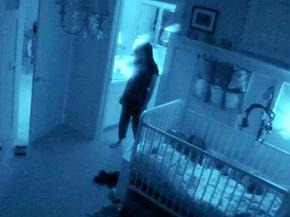 The phenomenon that was "Paranormal Activity" burned so brightly last year that at times it's easy to forget about "Paranormal Activity" the movie. As the legend goes, on a ridiculous shoe-string budget, that film went on to gross nearly $200 million worldwide, mostly on the back of a viral marketing strategy and word of mouth. "Paranormal Activity 2" would never had the chance to sneak up on anybody the same way. And as is always the case with follow-ups to breakout successes, there have been legitimate questions about how a 2nd pass would fare. "Activity" was about as gimmicky a film as one can find these days, but it succeeded because it worked that gimmick hard enough and honestly enough that audiences chose to buy the gimmick. It should come as no surprise that "Paranormal Activity 2" trots out the same gimmick. Yet here there are enough tweaks to the presentation and pace to earn success on its own merits.

Perhaps the biggest challenge that filmmakers faced with a sequel was how to deal with the conclusion of the first film. To solve that problem, the "Paranormal Activity 2" team actually went backward in time while also broadening their scope. Katie and Micah, the couple from the first film, return, but here the focus is on Katie's sister Kristi and her young family. Father Dan, his daughter from a previous relationship Alli, newborn son Hunter and the family's nanny Martine begin the film by photo-documenting their move to a new home in Carlsbad, California. Just a few days after arriving, their home is ransacked by an intruder, which prompts Dan and Kristi to have security cameras installed throughout the house.

Soon, those cameras begin to capture more than just the inanity of family life -- strange bangings, a disappearing pool cleaner, and troublesome light fixtures give way to increasingly more violent and hard-to-ignore phenomena. As in all haunting films, everyone would prefer to find another explanation or simply pretend that things are not going crazy, but Kristi begins to suspect malfeasance nearly from the start. Owing to strange occurrences from her childhood -- often involving Katie -- Kristi is suspicious of ghosts or other supernatural explanations. She is, of course, proven correct.

In some ways, "Paranormal Activity 2" almost couldn't fail. The expectations have never been that the film be "good" in any way that quality is typically assessed. Instead, as with the original, success is defined almost entirely by how effective the film is in generating the type of emotional response that audiences are paying to experience. To that end, "Paranormal Activity 2" knows exactly what it is and how to execute on the expectations for it. The family here continues the use of the handheld camera that typified the original film, but that is supplemented with the security camera footage that parallels the first film's tripod-shot bedrooms scenes. Unlike the first film, here the whole house has become a set, and thus the whole house can be host to strange occurrences. While the format of "Night #1," "Night #4" is maintained, the pacing and exploration of the disturbances does not follow the same generic trajectory. As there is now a baby and a dog in play, things actually escalate a bit more quickly, which should be a pleasant surprise for those who found the first film a tad too slow.

While it does improve on its previous instantiation, the sequel doesn't necessarily push beyond. The scale may be larger, but some of the new film's weakest moments come in tying the overarching plot together. Fans of the original film will likely forgive the narrative contortions that are necessary, though that does not make them any less serpentine. Similarly, much of the original's success came from its exclamation point of an ending. Repeating that type of knockout punch would have been tough, and though the film does make an attempt it ultimately can't quite measure up.

The fact that "Paranormal Activity 2" works as well as it does is a testament to producers who really understood what worked the first time around. It's also a testament to a director in Tod Williams who didn't over-execute. He gets strong performances from his small cast, and sets a nice pace. These two strengths -- as well as some genuinely scary sequences -- cover up for many of the film's flaws. As has been obvious to horror fans since at least the first "Blair Witch Project," there are few things more terrifying in film than a hand-held camera pointed directly into the darkness. Don't be surprised if Paramount decides to keep peering into that darkness around this time next year.