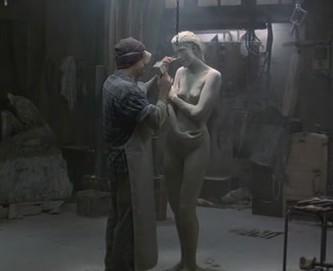 The stereotype is well-worn. The crazed artist; the insane genius who is so possessed by his work and trapped in his own mind that his suffering and his creativity are inseparable. A lion’s share of this rep has been earned by a small handful of people. Henry Darger was a quiet recluse who wandered the streets collecting scraps of paper. Only a chance discovery following his death revealed his influential work to the world. Then there is Michelangelo who, despite receiving handsome commissions for his work was also said to have lived in virtual squalor, by choice. Vincent Van Gogh…well we all know that one. The truth is poor Vincent along his buddy Gauguin, Jackson Pollock, and Michelangelo all had significant real world, everyman reasons for their strangeness (respectively; bi-polar disorder, alcoholism, alcoholism, and repressed homosexuality). Still the public idea of the paint-spattered loony persists. While that idea maybe globalized too frequently, there can be a fair amount of craze involved in the production of a watershed work of art. Not to pick on Michelangelo, but wouldn’t you be a little off your nut if you had to paint biblical scenes on a ceiling for 4 plus years?

Nacho Cerda’s follow-up short to “Aftermath” is “Genesis”, it is the third film in his “Trilogy of Death” series. It is the story of a figure sculptor who lives and works in seclusion following a tragic accident that takes the life of his wife. A dirty studio is his sanctuary and within it he is surrounded by the still, twisted faces of his past works. His latest project is a life-size recreation of his lost love.
As he works, the sculptor is besieged by his subconscious which brings the car crash back to him in flashbacks and dreams. Upon returning to the studio one evening after a short break he finds that the lifeless figure is bleeding. Over time the effigy’s hemorrhaging worsens until the dense stony surface is peeling off and revealing tender skin beneath. The artist also discovers that he is developing hard, fast spreading lesions on his own body.

“Genesis” is a very well rendered short. The cinematography by Christopher Baffa is even better than his work on “Aftermath”. The film relies solely on sound effects and music to augment Baffa’s impressive visuals. It is a bold but prudent choice to omit dialog from the mix, one that bolsters a sense of isolation. Cerda uses the machinery of that isolation and the imagery of the sculptor’s slow transformation into a roughly hewn stone sculpture to expand on a number of themes and motifs. The total absorption, obsession and assimilation of the artist during the creative process, the rigidity that comes with giving over to perfectionism and the sacrifice of self-actualization so that the piece might live, are all represented in the sculptor’s metamorphosis. There is also a clever endpoint that references Michelangelo and draws a line between divinity and the artist’s journey.

The film is firmly in the slow burn category and has echoes of Cronenberg’s “The Fly”. It is also dappled with what seem to be darkly comic interludes. These take the form of the sculptor’s dreams and flashbacks and they represent my biggest area of complaint with “Genesis”. The dreams are stagey, and they are cut in a hackneyed, overly frenetic way. These segments do not jibe well with the melancholy of the rest of the piece and it is difficult to tell if they are actually meant to be humorous or if they are simply a mistake of tonality. Additionally, while I applaud the choice to make the film dialog-free, some of the sound FX and foley work seems canned or too familiar. We aren’t talking Wilhelm scream here, but some sounds do have of a vaguely Looney Tunes quality to them.

None of this is enough to keep Nacho Cerda’s film from being worth of thirty minutes of your time. It is a more mature, more focused picture than “Aftermath” with better than average cinematography. It is also a movie that pinpoints and explores the one place where artists are deserving of their reputation as madmen. The process of rendering a creation to it’s perfected state is an exercise in calculated monomania; combining technique with experimentation and ecstasy in order to manifest the fruit of one’s imagination. Though “Genesis” isn’t the product of that process it is an entertaining and compelling drama about that journey told in a clear, concise manner.