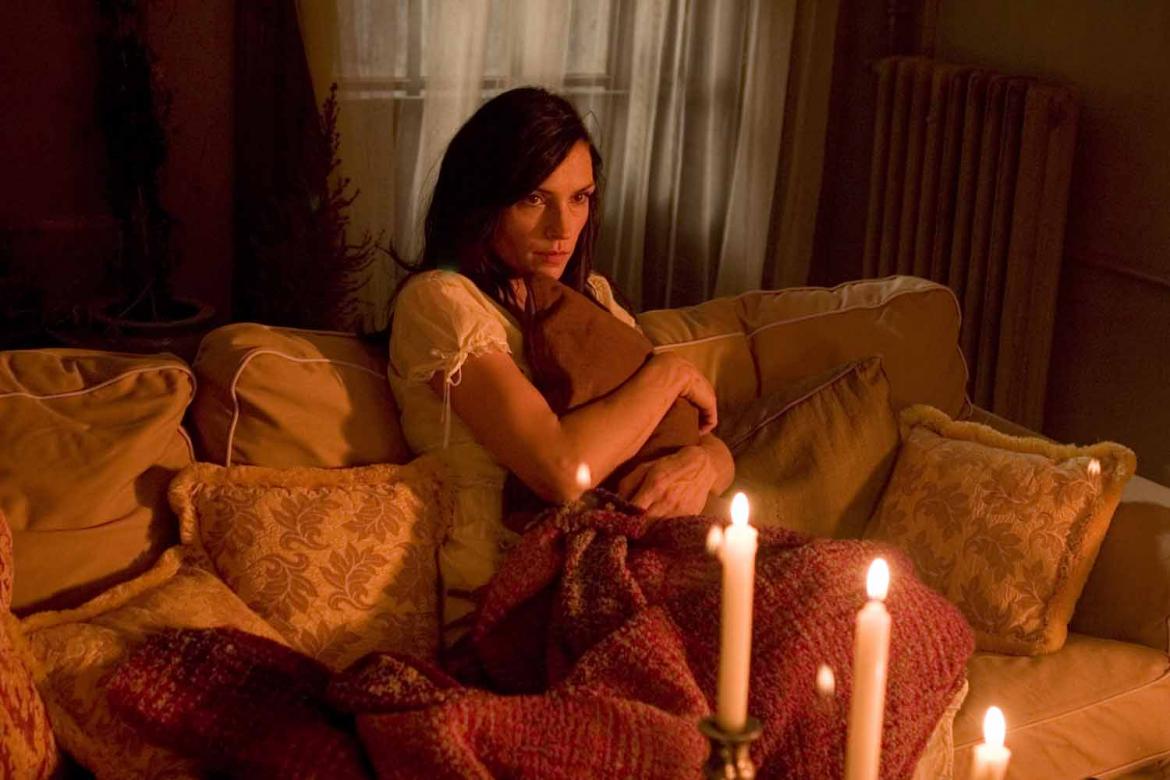 One of the challenges every ghost movie has to address is finding a way to keep the characters in the haunted house well past the point when any normal person would pack their bags and leave the house for the "Ghost Hunter" TV shows to fight over. In “Poltergeist” the spirits kept Craig T. Nelson around by kidnapping that little blonde girl. More recently, “Paranormal Activity” came up with the simple but ingenious solution that it was the person who was haunted, not the house. “100 Feet” uses modern technology to solve this problem,

specifically the tracking ankle bracelet that Famke Janssen has to wear while she is on house arrest for killing her abusive husband. Now I’m just a simple internet film critic and not a fancy big city lawyer but I have my doubts that the appropriate punishment for a husband-killing battered wife would be house arrest in the still-bloodstained house where the murder took place. Even without a vengeful ghost showing up, that’s some serious psychological junk going on right there.

The ghost in “100 Feet” isn’t content to start slow and slam a few doors, maybe make the walls bleed a little and wait until the third act to escalate to a full-on Class V manifestation. No, this guy only allows one spring-loaded cat scare before getting down to some serious haunting. Right off the bat he appears as a fully developed spectre, kicking Janssen down the stairs, lobbing dishes at her head and in general acting like a pissed-off incorporeal Ike Turner.

There are a handful of subplots tacked on, most of which go nowhere. Bobby Canavale plays the angry cop assigned to Janssen who also happens to be the former partner of her dead husband. Canavale begins the film acting suspicious and unfriendly towards Janssen and somewhere in the middle of the movie he becomes more helpful and supportive because he’s convinced that she’s innocent of murder and is taking the fall for the real murderer. There’s not really any reason for this change of heart and it comes out of nowhere. Her sister shows up for one fairly pointless scene where we learn that their recently deceased mother has bought Janssen the house. Is there any greater gift than one that not only reminds someone on a daily basis of the abusive relationship they endured but also the fact that they are a convicted murderer? Thanks, mom. Even the dreary cougar trend gets trotted out again in the form of a local delivery boy who is around long enough to get some play from Janssen and then get beat to a pulp by an invisible man in one of the least likely ghost attacks ever committed to film.

The problem with “100 Feet” is that the ghost isn’t much of a ghost. He’s so tangible and violent that he comes across less as a ghost and more as a raged-out invisible man. With its domestic violence angle and weird take on ghosts, the movie sometimes veers dangerously close to being “Sleeping with the (Invisible) Enemy”. This might play better for people who don’t usually find ghost movies scary because of the relative impotence of ghosts, but this ghost has so much power and is able to physically interact with the world so easily that you have to wonder why he even bothers with the spooky stuff and doesn’t just kill Janssen outright.

“100 Feet” unfortunately is not the sum of its parts. It has quite a talented cast and they all put in admirable and capable performances. It was written and directed by Eric Red, a guy with some serious genre cred who not only directed the underappreciated Jeff-Fahey-with-a-killer-arm movie “Body Parts”, but also wrote two of the brightest spots of 80s horror, “The Hitcher” and “Near Dark”. On paper “100 Feet” sounds like a home run but in actuality it’s a watchable but ultimately lackluster ordeal. It’s hard to get on board with a movie that manages to screw up a plot point that relates to its title and central premise: some of the film’s most significant scenes take place in the basement which is outside of the range of her ankle bracelet. If the range of the transmitter is indeed 100 feet, then she apparently lives in a 10 story house. I know it’s a horror movie and not a Freshman Geometry word problem, but for a film with a decent budget, name actors and a veteran writer/director it’s hard to let stuff like that slide.