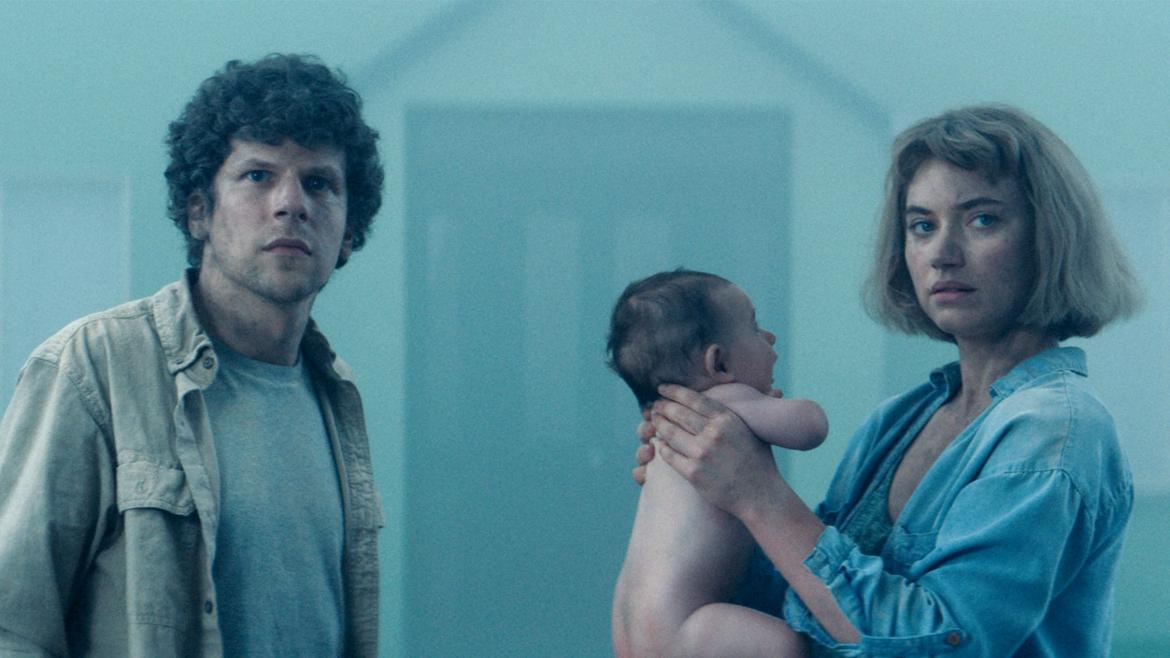 Domestic suburban life sounds like a nightmare to some. Lorcan Finnegan’s suburban dystopia, Vivarium, is not likely to win over anyone weighing the options of one day owning the perfect home and having a family of their own. In fact, it may just swear them off of human contact altogether.

Imogen Poots headlines with Jesse Eisenberg as Gemma and Tom, an unmarried couple looking for the perfect house. They decide to tour a suburban development called Yonder which features a labyrinth of identical housing units as though fresh off a factory line. Red flags abound for the couple then their “realtor” mysteriously vanishes before the end of the tour. Gemma and Tom attempt to leave but cannot find their way through the maze of houses and inexplicably keep ending up in front of #9 -- the housing unit they were being shown. Rattled, the couple desperately look for means of escape.

A vivarium by definition is an enclosure, container, or structure with the purpose of keeping a living thing in semi-natural conditions for observation. This is a glimpse into the mystery of Finnegan’s feature which informs a lot of what unfolds, but one can’t shake the feeling that there’s more to it’s ambitious themes. Specifically, at one point Gemma and Tom are presented with a baby and a message instructing them to raise the child in order to be released. The deeper insinuation potentially being that timid parents must survive the process of raising a child and releasing them into the world in order to be relieved of their parental duties and back to a life of their own. Combined with the prison-like nature of suburban cohabitation it becomes fairly clear that Finnegan may have a less than idealistic view of domestic life. The opening moments involving the parasitic nature of a cuckoo foreshadows the bleak ideas being explored.

One enthusiastic upside to Vivarium is the stylistic approach to its old school sci-fi visuals. The habitat consists of an endless sea of green tinted houses with perfectly trimmed lawns and a symmetrical sky complete with identical fluffy clouds. It all feels like a page of a children’s coloring book or Saturday morning cartoon, which only gives it that much more of an ominous feel given the dark intentions afoot. Finnegan plays with duality with superb visuals like the tranquility of the clean image of suburbia juxtaposed with Tom’s SOS message on top of #9. It’s a wonderful use of imagery that leaves a lasting impression and adds to the undeniable Twilight Zone vibes.

Vivarium boasts a bizarre blend of surreal black comedy and bleak humanity. Aided heavily by its visual style and a tremendous performance from Imogen Poots, Finnegan’s suburban nightmare succeeds mightily in the realm of peculiar sci-fi eeriness and should be approached with caution if a happy ending is what you seek.

Devil in the Dark