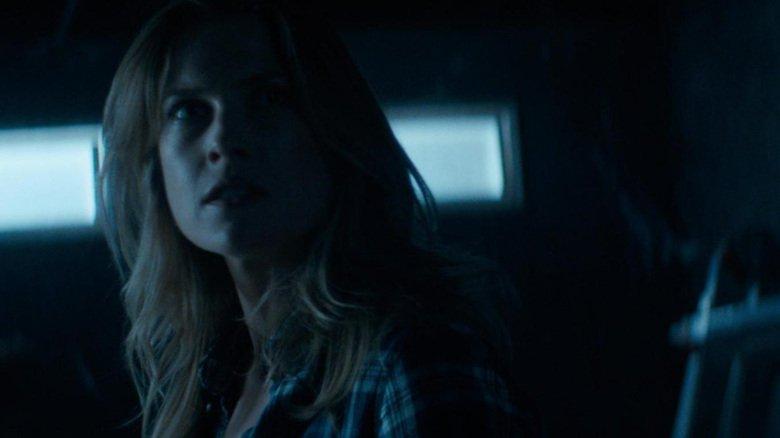 If you strip The Diabolical of its terribly conceived comic book dialogue of a title you may just find that it's got some good bones. Bones borrowed from the skeleton of better movies, but solid nonetheless. Still, there's a hard left turn two thirds of the way into the film so silly that it makes Alistair Legrand's debut almost irresistible...almost.

Legrand's secret weapon transforms his incredibly basic setup, but is better left to the imagination. Here's what you need to know, the film centers on a single mother, Madison (Ali Larter), and her two children Haley (Chloe Perrin) and Jacob (Max Rose). Madison is behind on her mortgage, but her money woes have been the least of her problems. Her son is extremely bright, but his anger issues are threatening his future. Additionally, for some time the family has been dealing with unexplained encounters with horrifying entities that appear and disappear with no regularity and appear to mean them harm.

Point blank, The Diabolical is a mess of a movie. Not very much of anything that happens in the movie makes any real sense. Even in the final act when Legrand swings for the fences it only elevates the rest of the film if you (like me) are able to just let it do its thing while chuckling at it. The tone itself does not share the same light hearted approach and takes every last thing that happens to these people deadly serious- a bold move considering how maddeningly silly things get. Legrand really goes for it in the end, but his tenaciousness can't erase the inconsistencies of the first two thirds. The scares are forced, the special effects are weak, and the pacing is off to say the least. We are plunged right into the thick of things, which is admirable, but there is no sense of urgency amongst the characters which just doesn't fit the gravity of the situation.

As Legrand's film plays out it seems like the filmmaker himself hadn't thought out his premise from beginning to end and therefore had to shoehorn in plot details that only serve to confuse his vision even more. In fact, the only seemingly powerful theme the film has going for it is Madison's concern for Jacob's future which ties into the finale in a way that would have been more affecting if the finale wasn't so silly. Therein lies the problem, without the ridiculous last act The Diabolical is just another lackluster horror flick with nothing new to say- with it its just a slightly above average sci-fi horror flick with almost nothing new to say.

The middle ground of The Diabolical is a high wire waving violently in the wind threatening to send anyone on it crashing to the ground with a resounding splat. For the time you can stand on that wire and appreciate Legrand's wacky sci-fi twist on tired supernatural ground, it's momentarily thrilling. That fleeting moment makes the inevitable fall at least marginally worth it.