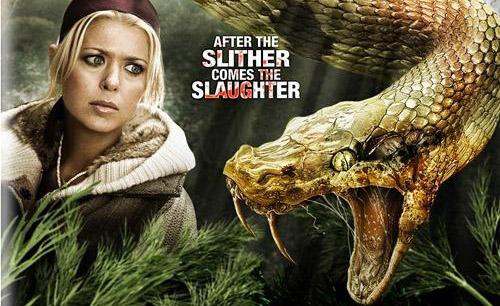 A scientific company has many irons in the fire, first and foremost, a cure for cancer! Distilled from the venom of the deadly viper, everybody’s happy at the company because you know… they killed cancer! With Corbin Bernson acting as the CEO, we soon find out that there’s a dirty side to the company as well. Accepting government money to experiment on new biological weapons, it turns out their scientists have been doing some genetic manipulation to the Vipers as well. Now enhanced, their venom is four times as deadly, they can move even faster, they’re smarter, and they now resort to hunting in packs! The vipers are kept in a glass container, presumably tucked safely away in the back of the genetics lab. That is of course, until secret government scientists show up to steal them and botch the job, setting them loose on a small island known for it’s tourist community!

In case you didn’t pick it up on the plot synopsis, “Vipers” is destined for SciFi Channel rotations right up there with such classics as ‘Mansquito” or “Bird Flu Horror”. At no point does the movie take itself too seriously nor does it try very hard to be convincing. Saddled with Tara Reid and a sub-par and formulaic plot, there’s not much for “Vipers” to look forward to right out of the gate. Tack on some horrid CGI snakes and Tara Reid trying to emote, and this is a ‘Man-Eater’ movie that will fail to scare you on all counts, but may vaguely engage readers with certain sensibilities.

Contained threats seem to always be the rage with killer animal movies these days; an entire town walled in by water with no where to run, trying to hide from hundreds of killer critters as they swarm over the town killing everything in their wake. It’s a theme we’ve seen time and time again making the movie entirely predictable and lacking in surprise. “Vipers” continues to milk the vein of clichéd horror, yet still manages to be semi interesting, if not entertaining. There is a loose attempt at plot here revolving around an ex-Marine medic who is visiting the town’s doctor played by “Stargate SG-1”’s Don Davis, who shows up to inform the doctor of the passing of his son. This dead son rears his head figuratively throughout the plot as it is the gristle that ties all of our random characters together; Don Davis’s son, the ex-medic’s buddy from the war, Tara Reid’s ex-boyfriend, on and on. He really serves no other purpose though.

While the CGI snakes were absolutely horrible - I’ve seen screensavers that look more realistic - the actual snake attacks where one of the highlights of the movie. Normally these types of films get thrown in for a PG-13 or less rating so that they can get fit easily into the SciFi Channel rotation; “Vipers” receives an R rating, mostly due to the attacks being pretty bloody. Granted, hardened gore hounds will probably still be disappointed, but when taken in context with other movies of its ilk, there is actually some decent carnage. Plenty of bloody wounds to be had here, and though it was never completely clear, there are some hints of the snakes actually burrowing into their victims. Remember, we are normally given all of this info off screen and are only shown the aftermath; so at least here we get something to salvage from the mundane content of the rest of the movie.

Beyond the entertaining snake attacks, “Vipers” trails off quickly into sci-fi/action clichés and fails to add anything to what has come prior. As for the actors, most turn in the performance you would expect; vaguely believable and emotive. They avoid being wooden, but don’t expect any academy award worthy displays here. Tara Reid is mostly forgettable for being the ‘big name’ of the cast, although she does illicit a few laughs here and there. Mostly cast as a slightly hippy-ish gardener who takes no nonsense, she’s convincing, but it really adds nothing to the overall movie! Don Davis is enjoyable as usual, although it makes me sad to think of this as his near last performance before his death.

“Vipers” isn’t going to wow or impress anybody, but if you’ve got nothing else to do it might be a decent way to kill two hours. Definitely not recommended for a purchase or even a Netflix slot, but perhaps late night on cable it might be worth your time.