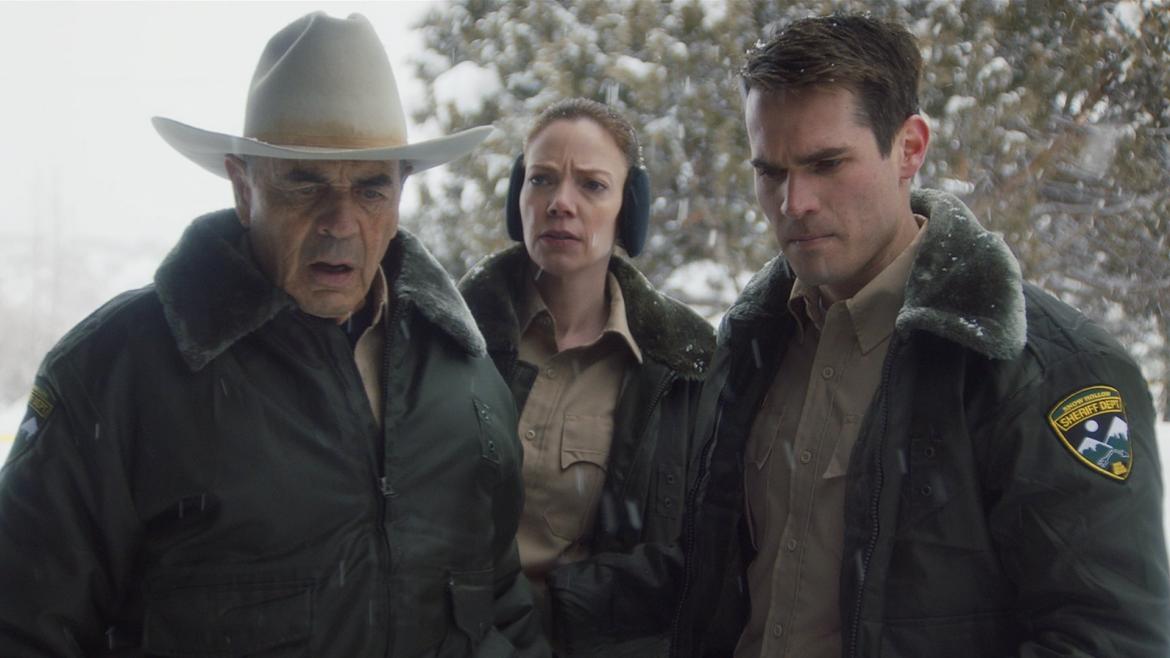 With his sophomore feature, Jim Cummings, reveals himself to be the purveyor of angsty, off-kilter humor presented in a blend of styles that, by all accounts, should not work. The Wolf of Snow Hollow isn’t content with being simply a unique modern recreation of an old school horror scenario as Cummings delightfully peppers in elements of mystery and drama while committing to a dead-pan Coen Brothers style sense of humor with a touch that's still all his own.

The citizens of the small town of Snow Hollow, nestled in the Utah Rockies, find themselves in the thick of a slew of violent and disturbing murders of women in the area. With ski season just around the corner the local police, specifically John Marshall (Jim Cummings), begins to feel immense pressure to put a stop to the killing as rumors that the town is being stalked by a supernatural beast start to swirl.

With his performances in Thunder Road and now The Wolf of Snow Hollow, Jim Cummings's method feels as wild and unrestrained as the alleged wolf running amok. Once again playing a cop, Cummings plays a recovering alcoholic with an acerbic sensibility who rarely minces words with his co-workers and peers. His contentious relationship with those around him creates an uneasy tone, but one that balances tension with comedy with nary a one conceding to the other. The tone carries throughout the film and John’s bitter attitude--toxic as it is--becomes an outlet for deadpan humor as well as a window into characters like him. The prickly and thick shell of such an unlikeable and flawed character conceals someone who has a humanity that’s hidden by an unflattering defense mechanism. By no means, does it seem like Cummings’ script or performance is asking you to believe he’s a good person, but the film challenges you to see something deeper beneath the surface.

This examination of interiority, and specifically masculinity, is one of the key themes of The Wolf of Snow Hollow. Throughout the film John refuses to give in to the supernatural rumors despite mounting evidence to the contrary. The tangible evidence points to the unimaginable, but Cummings’s script is keen that many of its characters and the audience not just take things at face value. Even as the film seems to veer further into comedy with bumbling police work, Cummings reels you back in, steadying the ship with starkly filmed sequences of violence and effective moments of character drama while still not letting go of the off-beat sense of humor. John's relationship with his daughter (Chloe East) plays into a lot of the film's emotional threads. Riki Lindhome, as a fellow detective, turns in a carefully calibrated performance full of quite cool competence in the face of the proceedings. But not to be overshadowed is John's relationship with his Sheriff father played by the late, great Robert Forster in his last film appearance. Even with a limited amount of screentime, Forster summons his legacy of cinematic no-nonsense tough guys to imbue his past-his-prime character with a nuanced fear of mortality while John continues to (quite literally) hold him up to his peers in the police department.

Adding to the overall strength of the film is it’s surprising visual aesthetic and outstanding cinematography. There are several scenes set against a steady flurry of snow, specifically at night, which create an ominous, eye-catching environment. The camera plays intentionally into the immediacy and mystery of certain scenes, while in other moments the camerawork is playful and slightly winking. Specifically, early on we see a shot of a massive wolf standing on its hind legs as it prepares to attack its prey. It’s a moment that gives the audience all the proof it needs that we’re in a supernatural horror film even while John is steadfast in his belief there’s a reasonable explanation. The interplay of visuals into the story is brilliant and makes for an immensely rewarding experience.

Jim Cummings has a unique cinematic voice and The Wolf of Snow Hollow is an unexpected outlet for such a voice to thrive. Rooted in a style of horror/mystery not typical in the modern landscape of genre cinema, this is a breath of fresh, chilly air that’s uncommon given the many genres colliding together. The Wolf of Snow Hollow confidently leaves a fresh path of bloody hard to categorize footprints in the top charts of 2020 horror films.

Vampires vs. the Bronx