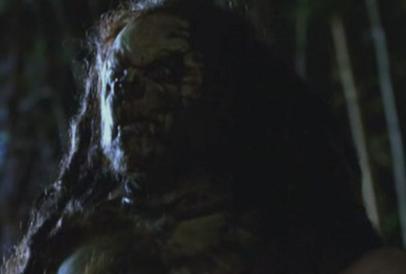 Question: Why is it so impossibly hard to craft likeable, sympathetic characters in modern horror movies? Writer/director Jorg Ihle's monstrous outing "The Tribe" (aka "The Forgotten Ones") takes an interesting premise -- friends stranded on a mysterious island populated with murderous monsters -- and saddles it with some of the most annoying individuals you'd ever want to meet. Nevertheless, watching them die slow, agonizing deaths was pleasing, and had Ihle spread the kills evenly throughout the picture, I might have walked away from this experience feeling satisfied, content, as if everything was right and just within the physical and spiritual confines of our crazy little world.

Sadly, most of the cast is dispatched right off the bat, leaving us with one wimpy heroine to root for. Unlike other films of this nature, "The Tribe" doesn't boast a strong female lead worthy of our compassion. It's hard to get behind someone that ultimately leads her fellow castaways into the heart of despair; were it not for her knee-jerk reaction to the disappearance of her unfaithful fiancé, her friends might be alive and well to this very day. Flawed hero types often work quite well in this sort of picture. Stupid ones, I'm afraid, only serve to irritate and exasperate the audience.

The film finds a group of life-long friends -- two couples and one spare tire -- embarking on a relaxing sail boat ride into picturesque waters, an adventure which ends in gore-encrusted tragedy. After the ocean violently claims their expensive water-based vessel, the group takes refuge on an uncharted island until help arrives. After a tumultuous evening of bickering and bad acting, the friends awaken to discover someone -- or something -- had snatched our heroine’s husband-to-be right from under their collective nose. Additionally, a long, bloody trail leads from their makeshift campsite directly into the surrounding junglescape, much to the horrific dismay of all involved.

Naturally, an extremely reluctant search party is formed, and the hunt begins for their missing mate. Before you can say “Michael Crichton’s ‘Congo’ was adapted for the screen by Frank Marshall”, a grisly assortment of monkey/orc hybrids descend upon our would-be heroes, picking them off one-by-one with startling efficiency. They swing through the trees like carnivorous, hideously deformed monchichis, delivering their swift brand of terror through the use of brutally loud sound effects and nimble editing. The only person left to contend with these blood-thirsty creatures is Liz (Jewel Staite), the aforementioned half-hearted heroine, who must strategically use her wits if she wants to survive.

Truth be told, there isn’t much to like about "The Tribe". The film’s opening hip hop-style montage is almost embarrassing in its ineptitude, as is the cast’s inability to deliver a single line of believable dialogue. Once the characters arrive on the island, however, things only get worse. The picture‘s titular beasts, although impressive and occasionally menacing, look painfully similar to the orcs found lurking within Peter Jackson’s “Lord of the Rings” trilogy. What’s more, the majority of the kills are lumped into the first half of the feature, and given the story’s lackluster conclusion, there’s not a whole lot to keep you watching beyond the 45-minute mark.

The only positive aspect to Jorg Ihle's insanely flawed endeavor lies in the promise of a remake. Apparently the producers behind "The Tribe" were not overly impressed with the final product, and have already taken steps to get the ball rolling on a so-called “reboot” of the franchise. “The Lost Tribe”, helmed by “Pistol Whipped” director Roel Reine, will attempt to right the wrongs found buried in the version I was unfortunate enough to discover. The story is certainly interesting, and, in the capable of hands of a skilled filmmaker, could make for one hell of a hardcore horror flick. This particular tribe, I’m afraid, is dead in the water. Pun completely intended.