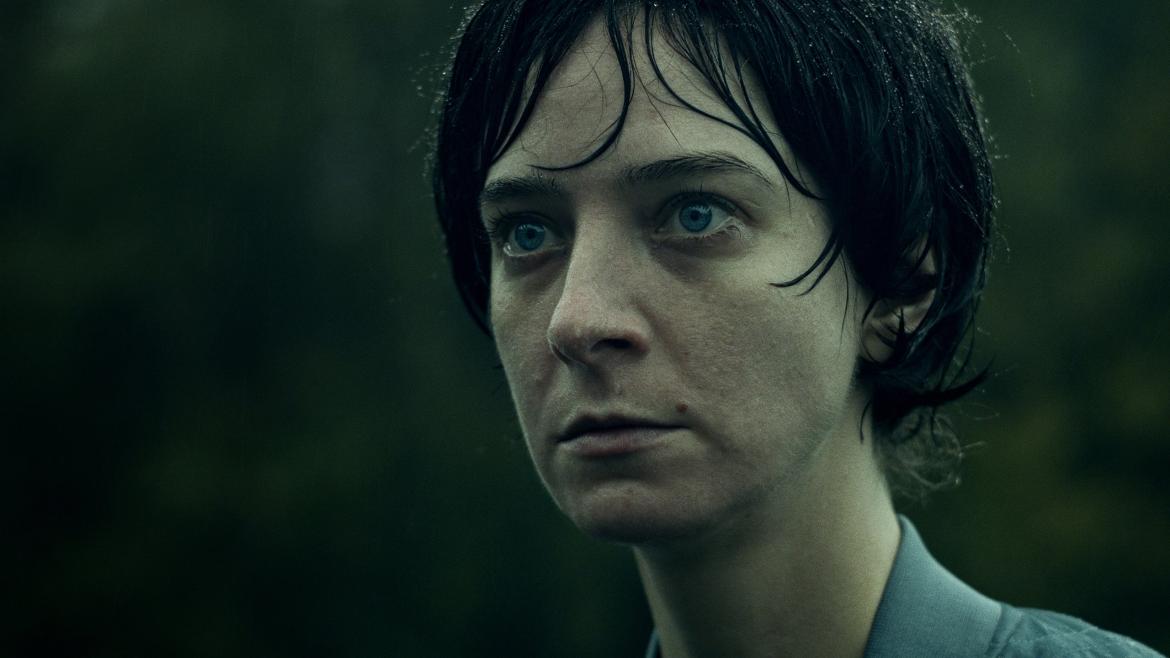 Content Warning: Depictions of sexual violence are discussed below.

Violation, from filmmaking partners Dusty Mancinelli and Madeleine Sims-Fewer, is another entry in the rape-revenge genre that environs itself into a significant cultural moment. At the time of this writing, Emerald Fennell’s Promising Young Woman maintains a firm grasp on the cultural conversation around issues of sexual violence, consent, trauma, and justice. The film has been nominated for several high profile critic circle awards and recently earned best director and original screenplay awards from the Alliance of Women Film Journalists. The film has become a flashpoint for the hows and whys of a subgenre that’s been lauded for razor sharp observations on gender and roundly dismissed as exploitative titillation. In conversation with the crusade for justice in Promising Young Woman, Mancinelli and Sims-Fewer’s film seeks to emphasize an individual’s embodied experience of post traumatic stress and its lasting impacts.

As Violation opens, Miriam (Sims-Fewer) and her partner Caleb (Obi Abili) are driving to a family lake house for a weekend with Miriam’s sister Greta (Anna Maguire) and her husband Dylan (Jesse LaVercombe). We see that Miriam and Dylan have a natural charisma and we learn that their families have a long history. One night the two stay up late drinking and discussing their sex lives, or, for Miriam, the slow decay of her sexual attraction to Caleb. As the two awaken the next morning, groggy and hungover, Dylan assaults Miriam in an exchange he believes to be consensual. Miriam attempts to share her experience with Greta who sees it merely as a ploy by Miriam to disrupt her life. A year later, after Miriam has been left to process her trauma alone, she decides to take the matter of retribution into her own hands.

Like in many genre works, the effectiveness of Violation comes from it’s elaboration. The derivative quality of the premise is, in many ways, part and parcel of the film’s project. The filmmakers make an essential decision to tell this story in a non-linear fashion. Throughout the film’s first act, we cut back and forth between three distinct timelines; the initial weekend at the lake, Miriam and Dylan meeting up at the cabin again, and Miriam helping her sister prepare for a gathering with Dylan’s family. As each of these timelines unspools, we witness the multitude of ways Miriam, Dylan, and Greta are coping with the fallout of Miriam’s assault. There is denial, anger, despair, and regret running through these scenes. But most essential to all of this, is in the film’s depiction of the assault. It is quiet, fumbling, and slow. For Dylan, it's an act he chooses to believe could not have possibly been anything but consensual. For Miriam and the viewer though, it is suffocating and she does not get a chance to breathe for the rest of the film.

This palpable sensation of smothering extends thematically throughout the film. Cinematography from Adam Crosby presents the lakehouse and the surrounding forest as a crowded collection of objects encroaching around Miriam. In a sequence where Miriam attempts to confront Dylan following the assault, the two are framed within a tool shed, objects cluttering the walls and benches around them as two windows offer but the smallest glimpse of the shining lake in the distance. It is in this lake, in the open waters, that Miriam attempts to open herself up to her sister, only for her sister to instead accuse Miriam of breaking her trust. Toward the end of the film, Miriam experiences a breaking point and unleashes her anger in the midst of a rain storm. There’s catharsis in the act but she is still alone and displacing her emotions.

While much of the film displays a stark, effective realism, the filmmakers tend to lean on some overwrought visual metaphors to further accentuate the action. Animals and insects are used to heighten the already sere emotional states of these characters, or the critters act as foreboding, primordial villains. There are a few conversations about being vegetarian that are at once bland bits of character building and oddly didactic in their messaging. These moments have the adverse effect of dulling the powerful impact of how the film plays with time and the memories of these characters.

Despite these tendencies, Mancinelli and Sims-Fewer have carefully crafted an impactful rumination on the aftermath of assault. Coupled with raw performances and stunning visual effects work, Violation is an emotionally wrenching piece of cinema that offers no easy answers.